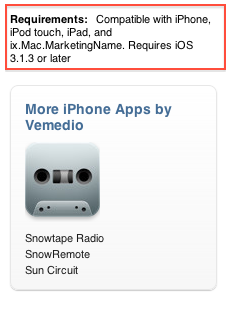 As noticed by several developers and bloggers last night soon after Tweetbot went live in the United States, a strange and curious string started appearing in the App Store’s description pages, under the “Requirements” info tab: ix.Mac.MarketingName. Initially tweeted by Panic’s developer Cabel Sasser, the “bug” has extended to hundreds of other apps in the Store.

This string has lead many to speculate it could be an indication of a new device capable of running iOS apps in the works that’s somehow showing up on the App Store due to a technical error, an old placeholder, or a simple bug on Apple’s end that doesn’t mean anything. Some theories point to “ix.Mac” as an emulator for iOS apps on the desktop – similar to what Apple is already doing with the iPhone Simulator, but for consumers. Others speculate it could be a new device, a sign of universal OS X / iOS apps, or apps finally coming to the Apple TV. The Apple TV second-gen, however, runs a modified version of iOS – whilst the string clearly mentions the Mac.

The most interesting theory we’ve read so far is perhaps looking a bit too much into the placeholder’s name, yet here it is: what if it’s not “ix.Mac.MarketingName” but iX – as in iOS meets OS X?

You can see an example of the string here.

Update: Apple removed the string from every app in the Store. See here.