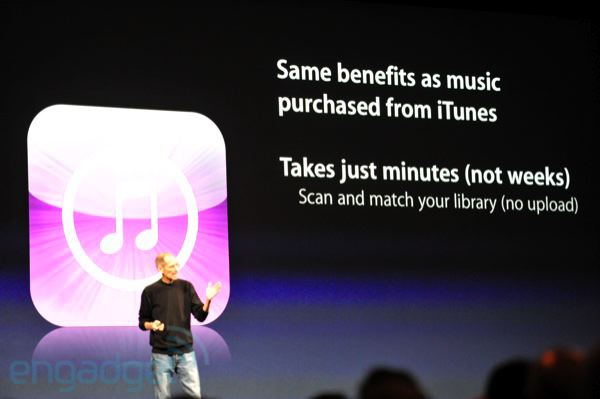 Once again, the rumors were real – Apple has just introduced iTunes In The Cloud at its WWDC keynote. The new system will allow you to get access to all your previously purchased songs on device from a new Purchased tab in the iTunes Store (similar to Purchased apps in the new App Store) and download items at any time. More importantly, the new cloud will allow you to push a single purchase to multiple devices at once – a first in the music industry, Steve Jobs said.

But the real new feature was unveiled on stage as a “one more thing” by Apple CEO. As previous rumors and speculation suggested, iTunes in the cloud would be more than simple pushing and updating of songs from the iTunes Store. Besides the usual sync (and the new WiFi one?) and iTunes Store, Apple will offer a new iTunes Match service that scans your music library, and matches it with Apple’s catalogue of 18 million songs in the cloud. iTunes Match comes at a price: $24.99 per year.

In additions, iTunes Match will upgrade the songs to 256k AAC DRM free. And it costs just $24.99 per year. So if you’ve got a bunch of music that you didn’t get from iTunes, you can get it in the cloud. Now if you look at some competitors, you’ll be surprised. We scan and match, the other guys you have to upload the whole collection. The other guys only have web apps. For 5000 songs, Amazon is $50. Even up to 20,000 songs, we’re one flat price.

The new iTunes in the cloud will be available as developer beta today.

Update: it looks like “some music features” of iCloud will be available in the US only while in beta. We assume the new iTunes Match service will be US-only during this period. From Apple’s official iCloud page:

Update #2: This is my Next has posted a video showing iTunes in the cloud in action on the iPhone running iOS 4.3.