I almost can’t believe I’m writing this: Tweetie for Mac has been updated. Sadly, it’s not the long awaited Tweetie 2, but at least it’s got OAuth support, meaning that the app won’t die when Twitter will officially kill the old authentication system.

Since Twitter acquired Loren Brichter’s Tweetie for iPhone and Mac, we all feared that the new team would only focus on the iPhone app, leaving Mac users behind with a version based on a deprecated authentication system. Knowing that they didn’t even have plans to make it an official client didn’t help either. Then, two weeks ago we reported that an update for the Mac version was on its way this month, and here it is: a rather minor update that brings OAuth, better Magic Mouse support and removes Fusion Ads according to Twitter’s new Terms of Service.

It’s kind of surprising though that there’s still no official word about the 2 version (we don’t want that much, a tweet would be enough) especially considering that thousands of users entered the latest MacHeist sale just to get their hands on an early beta version of Tweetie 2 for Mac. But, we heard some rumors last week from a source close to Loren, who claims that he’s up to “some amazing stuff for Tweetie”. I bet he is. Working at Twitter must be awesome.

You can find the changelog of the new 1.2.7 version after the break.

[UPDATE] They’ve pushed another build that fixes the authentication problems, 1.2.8. It’s available here. Still, you know my position about this.

Twitter will make API changes on August 16th that break old versions of Tweetie for Mac. This update keeps the tweets flowing. Other updates:

In accordance with the Twitter Terms of Service, on July 1st Fusion Ads will no longer be displayed.

Tweets no longer say they’re from “Twitter for iPhone,” but instead “Tweetie for Mac.”

An option in “advanced” to update your iChat status when you tweet. 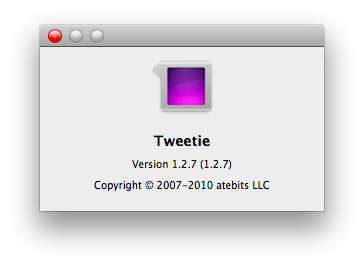 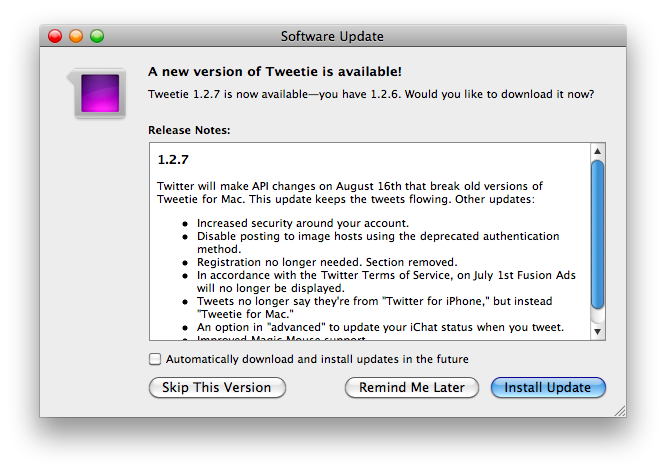