Ever since Twitter acquired Loren Brichter’s Tweetie, we all wondered what was going to happen to Tweetie for Mac - the most popular Twitter client on Mac OS X. Then Twitter platform / API head Ryan Sarver confirmed with a post on the official development group that they had acquired the Mac version as well as part of the deal with Loren. That was a huge relief, as we all feared that with new job Loren could drop the development of his great Mac app.

Then Twitter announced they would discontinue Basic Auth support by the end of June and we all figured - well, Tweetie for Mac is going to be updated and we’ll keep using it. Developers started updating their clients to work with OAuth, but Tweetie for Mac was standing still. We kept hoping. Weeks passed by.

On June 1st, we freaked out. The Month of Judgement came and Tweetie for Mac was still based on Basic Auth. “Where the hell is my OAuth Tweetie?”, someone wrote.

Guys, chill. Tweetie for Mac is going to be updated later this month.

The same Ryan Sarver confirmed with a reply on Twitter that the app “will be updated for sure”. This is the tweet, this is the original question. 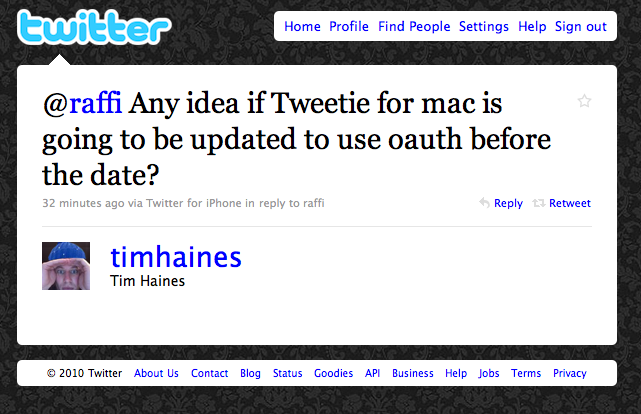 Basic Auth will be officially discontinued on June 30th. We don’t know if the update will just be geared towards authentication methods or whether Loren is going to drop the long-awaited 2.0 update but still, we’ll be able to keep using it. At this point, that’s enough.