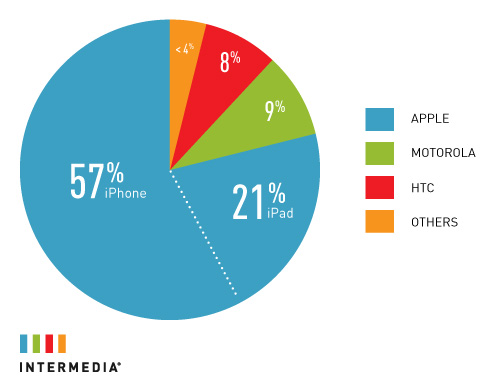 The iPhone and iPad are leading the charge in small and medium-sized businesses (SMB) for smartphones and tablets according to Intermedia. In a study by Intermedia, who handles 350,000 premium hosted Microsoft Exchange servers, Apple’s iOS devices are dominating the stats when it comes to ActiveSync activations performed by the company. The iPhone has an overwhelming 57% coverage in this bracket and the iPad has 21% as well. That leaves only about 22% for competitors such as Motorola, HTC and others. The nearest competition to the iPad’s 21% is Motorola with only 9%. See above graphic for full stats.

The graph data compares the use of ActiveSync devices in Intermedia’s clientele. ActiveSync is the syncing protocol that smartphones use to sync email and other information with Microsoft Exchange. Intermedia supports email, contact and calendar syncing for smartphones, including iPhone, Android, BlackBerry and Windows 7 phones. 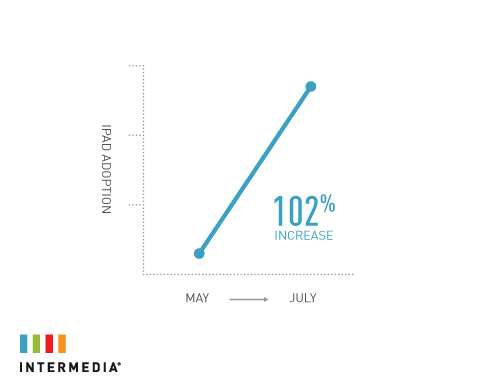 This second chart is interesting as well, it’s solely based on tablet adoption in the SMB market. iPad adoptions have soared to a 102% increase from the short period from May to July of this year giving it the 21% shown in the previous chart.

Apple isn’t putting a lot of extra effort into the SMB markets as a whole but the general adoption by all people, business or not, is what fuels the dominance. People use these Apple devices outside of their job so much they also want them incorporated into their work as well. Apple makes it so easy for businesses to use their iOS hardware, so why wouldn’t they be dominating this category.