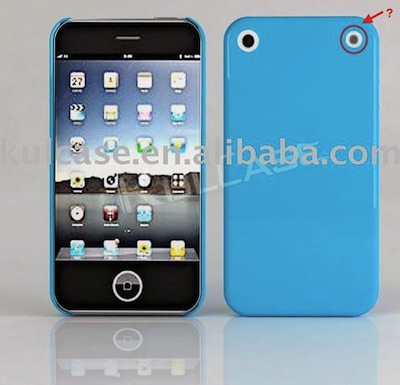 As noted by GadgetsDNA (via MacRumors), a new case design surfaced on e-commerce website Alibaba seems to suggest a new camera flash placement for the next generation iPhone, as well as a thinner bezel with an horizontal edge-to-edge display design. The case points to the new iPhone model as “iPhone 5G”, contradicting a recent report that claimed Apple was working on an iPhone 4S, sharing the same industrial design of the curent-gen iPhone 4.

3. Perfectly fits the iPhone 5g, easy to insert and remove .

4. Unique design allows easy access to all buttons, controls & ports without having to remove the case.

The case has a slot for the camera flash on the opposite side of the lens, which is rumored to receive an upgrade for the iPhone Apple will likely unveil in September. As far as theories about the larger display go, a report from This Is My Next in April claimed Apple was working on a completely redesigned iPhone with a “teardrop design”, a larger display, a new Home button, and worldphone capabilities. It’s worth noting, however, that former Engadget editor Joshua Topolsky (now writing for This Is My Next) also said the iPad 2 would get an SD slot and an higher resolution screen – features that weren’t implemented by Apple in the final product. Several rumors in the past months suggested Apple could release a redesigned iPhone 5 with a larger screen, NFC compatibility and a tweaked Home button design, but recently multiple sources and analysts close to “people familiar with Apple’s plans” seem to believe the next-generation iPhone will launch in September with a design similar to the iPhone 4, and upgrades to the CPU, RAM, and rear-facing camera lens.