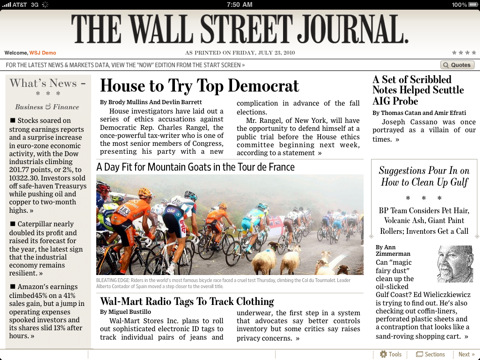 There’s been quite a debate around the implementation of Apple’s new subscription policy for publishers (we’ll see the real consequences in June) and the problems faced by newspapers and magazine apps for the iPad, which most of the time don’t offer anything users couldn’t find already for free online, or in previously released printed formats. The funny thing is, sometimes the digital version costs even more than print, has a clunky purchase and download system and less content than the magazine. Newspapers, on the other hand, offer less news at a slower rate than a website. For this reason publishers have struggled, and Apple hopes to invert the situation with an easy to use subscription system that’s the first step towards a wider adoption of magazines and newspapers for the tablet. But in the meantime, the Wall Street Journal reports some interesting numbers.

The publication announced they added 200,000 new subscribers from tablets like the iPad, Nook, Kindle and Android devices in the past year. Now I’m no WSJ insider, but I guess most of these subscribers come from the popular WSJ iPad app, which is available for free in the App Store and requires a login for paid subscribers.

The 200k figure is a combination of News Corp’s paid subscriber base on all tablet-size devices, including the iPad, Android tablets, the Kindle, and the Nook. In contrast, the print edition currently represents a circulation of approximately 1.6 million.

The company hasn’t provided numbers for smartphones. With the iPad and Kindle being the ideal reading devices for many, lower performances on iPhones and Android devices wouldn’t be a surprise at all. [via Electronista]