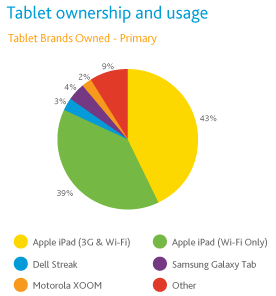 A Nielsen survey released today reveals the iPad has a commanding lead in the US tablet market, controlling a staggering 82%. This is despite the recent entrance to the market by Android tablets from Motorola, Samsung and others, which have comparatively trivial share of the tablet market.

The survey didn’t differentiate between the iPad 2 and original iPad but it did find that there is a fairly even split between WiFi-only models (43%) and WiFi+3G (39%) models. Also fascinating was that the survey found large proportions of tablet users would change their usage of other devices. In particular 35% of desktop computer and 32% of laptop users would use their computers less often or not at all after purchasing their tablet. E-readers and portable music players would also be used less or not at all following a tablet purchase by 27% of those surveyed.

Furthermore, the most frequently given reasons for using their computer less is mostly because the tablet is “easy to carry/take with you”, “ease of interface/OS” and the “fast start up/off” it provides to users. A final interesting note is that 43% of correspondents said that more than 1 person in their family/household is a user of the tablet device.