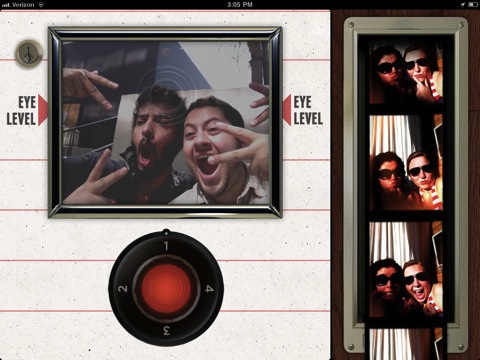 Apple’s Photo Booth software that comes pre-installed in the iPad 2 is great and offers lots of fun, but if you’ve been looking for an actual photo booth app with the vintage look of photo strips to virtually print with your friends and loved ones (who hasn’t done that at least once), then you should consider re-downloading IncrediBooth for iOS, which has been updated to natively support the iPad 2.

I was one of those that bought IncrediBooth last year but never really used it because the iPhone’s screen was too small to have fun with my friends in front of the camera. But on the iPad? Should be much better. As usual, you can take photos with 4 different effects, share to Facebook or email, save to the camera roll. In this update, a new photo setting has been introduced: Betsy X.

Combined with Apple’s Photo Booth, IncrediBooth is one of those apps that will grant you hours of fun and picture taking. Go get it in the App Store at $0.99.