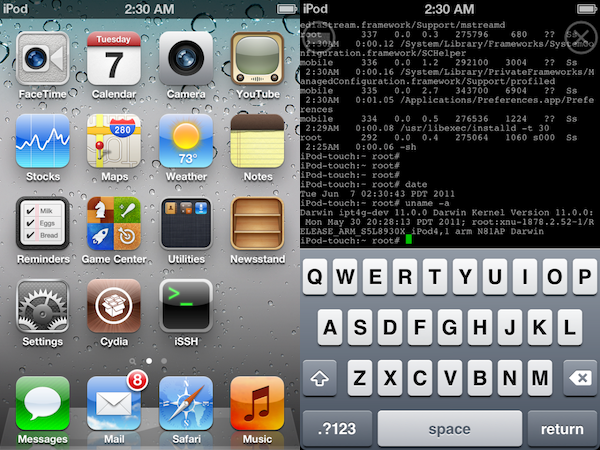 As tweeted by MuscleNerd an hour ago, the screenshots above show an iPod touch 4th generation running the iOS 5 beta seeded to developers last night and already jailbroken to install Cydia. According to MuscleNerd, there aren’t “many surprises” here, as the device was jailbroken using the existing limera1n code and a tethered boot from a computer.

What this means for jailbreakers is still unclear. There have been jailbreaks for early iOS betas in the past, though in most cases the Dev Team preferred to wait for a public release before unleashing the necessary code to install Cydia on iOS devices. Furthermore, the exploit that allowed MuscleNerd to jailbreak his iPod touch is likely based on bootroom holes found in the past months on the iPhone and iPod touch – meaning, there’s no confirmation whatsoever iPad 2 users will get a proper jailbreak once iOS 5 comes out this fall / more betas are releases throughout the summer. Still, the images above show the new iOS 5 with Newsstand and Reminders running alongside Cydia – that’s a good start.