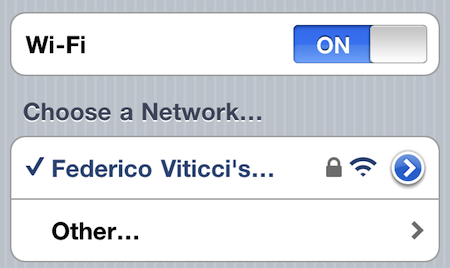 According to reports surfaced on Apple Support Communities, many users are experiencing WiFi connectivity issues on devices running the latest iOS 4.3.3. These issues are nothing new to iOS – you might remember the problems with the original iPad and WiFi routers last year – but this time it appears they’re affecting iPhone and iPod touch models as well. The story is very similar to last year’s reports: a device fails to connect to a network or is unable to navigate; the WiFi icon doesn’t appear in the statusbar even if the device is actually connected; the device randomly disconnects from a network. You can read more about what users are reporting here, or here.

Personally, I did notice my iPhone 4 keeps disconnecting from my home network (running on an AirPort Extreme station) a few times every day. It’s kind of annoying as the disconnection lasts between 30 seconds and 1 minute, but like I said it’s not happening more than 3 or 4 times a day – surely not “all the time.” On my iPad 2, WiFi signal is stable (doesn’t drop) but it’s lower than before even a few meters away from my router. Again, these are issues I wasn’t experiencing on iOS 4.3.1 or 4.3.2 and definitely seem to fall in line with Apple Support Communities’ discussion threads.

Most of the times, though, there’s no need to panic. If iOS really has a WiFi bug, you can stay assured Apple will fix it soon with a software update – if the reports will get stronger in the next weeks, Apple will issue a new version of iOS like they did before. Several users, however, forget that having a proper network configuration helps a lot when having to deal with multiple mobile devices; if the issue is not in the network, resetting your iOS settings to factory usually helps in resolving all WiFi connectivity problems. If the issue persists (like on my iPhone), then it’s certainly something Apple will have to take a look at. [via ReadWriteWeb]