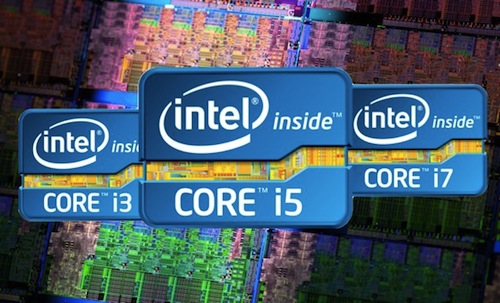 At an investor event in London earlier today, Intel CFO Stacy Smith said the company would be open to make chips based on external intellectual properties and cores, Reuters reports. Using Intel’s chip manufacturing process, widely regarded as superior to most competitors in the silicon-making space, producing chips for other companies would be a “fantastic business” for Intel, Smith said, though it would trigger an “in-depth discussion” within the company.

If Apple or Sony came to us and said ‘I want to do a product that involves your IA (Intel architecture) core and put some of my IP around it’, I wouldn’t blink. That would be fantastic business for us.

Then you get into the middle ground of ‘I don’t want it to be a IA core, I want it to be my own custom designed core,’ and then you are only getting the manufacturing margin, (and) that would be a much more in-depth discussion and analysis.

Intel’s Sandy Bridge processors are currently used in Apple’s MacBook Pros and iMacs, with the popular MacBook Air line rumored to get an upgrade to the same CPU architecture in June or July. Intel, however, does not make chips for mobile devices like the iPhone or iPad, a growing market where Intel has been left behind, putting British company ARM in a leading position as the only chip maker for iOS devices and upcoming tablets that will hit the market later this year. In the past months, due to the popularity of ARM’s architecture, it was rumored Apple could consider switching from Intel to ARM on the desktop as well; on the other hand, Intel announced its intention to develop chips for always-on, always-connected mobile devices with Silvermont and Airmont processors said to be included in future Android and MeeGo devices. As for Apple, it is unlikely that the company will switch architectures on its iOS and OS X platforms in the immediate future, though Smith’s statements could open to some interesting possibilities when it comes to Apple-designed cores combined with Intel’s manufacturing power.