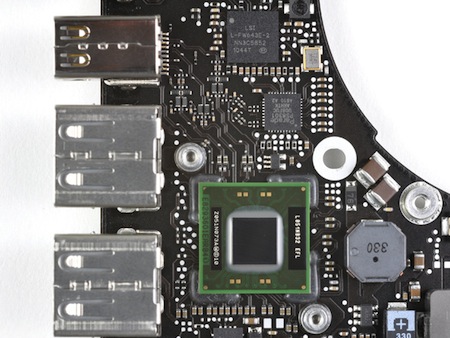 iFixit didin’t waste any time and, shortly after the release of the new MacBook Pros, tore down a 15” model to see the changes performed by Apple in this revision. It turns out, not much. Most changes are visible in the logic board (quad-core processor, AMD GPU, Thunderbolt chip) and in the way the battery is attached to the laptop.

A few notes from the teardown below.

Battery life decreased from previous generations, as Apple is performing more accurate tests with more realistic estimates (their tests include Flash installed while browsing the web):

iFixit thinks Apple made some improvements to wireless performance under the hood;

The wireless card bracket is aluminum, rather than the plastic in previous revisions. Perhaps this change was made for thermal reasons, as a visible pink thermal pad is used to transfer heat from the board to its aluminum bracket.

Holy thermal paste! Time will tell if the gobs of thermal paste applied to the CPU and GPU will cause overheating issues down the road.