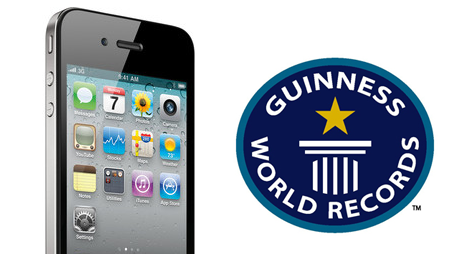 The iPhone 4, the iOS App Store and a number of iOS games have been honoured with Guiness World Record awards. The iPhone 4 was named the fastest-selling portable gaming system following a first day sales figure of 1.5 million units when it was released on June 24 last year – far exceeding the previous holder of the title, the Nintendo DS which sold 500,000 units over a week in 2004.

“The release of the iPhone has not just changed the mobile industry, but the video game world too,”Gaz Deaves, Guinness World Records’ gaming editor, said in a statement. “With the never-ending App Store selection and an intuitive device, Apple has created a gigantic new space for itself in the casual games genre that literally brings entertainment to users wherever they may be.”

Apple’s App Store has also been awarded the Guinness World Record for being the most popular application marketplace following more than 6.5 billion downloads since its launch in July 2008. The App Store is also the largest downloadable video game store, which had as of September last year, roughly 37,000 games. This figure far exceeds other downloadable game services such as Steam, which offers around 1,110 games, the Xbox Live Indie Arcade, which has 1,300, and the Wii Virtual Console, which offers around 580 games. The final award gong given to the App Store was for having the largest launch line-up of any gaming system – with 145 games that were available on July 10th, 2008.

Several iOS games also received awards including the infamous Angry Birds which received an award for being at the top of the paid apps list in the most countries after selling more than 6.5 million copies since being released in December 2009. Plants vs. Zombies was awarded for being the fastest-selling iPhone/iPod strategy game with more than 300,000 paid downloads in just nine days. It also received an award for being the highest-grossing strategy game in the App Store – generating about $1 million for its developer, PopCap, in just over a week. Lastly, the Tap Tap Revenge game series was awarded the most popular game series in the App Store after more than 15 million downloads since launching July 2008.