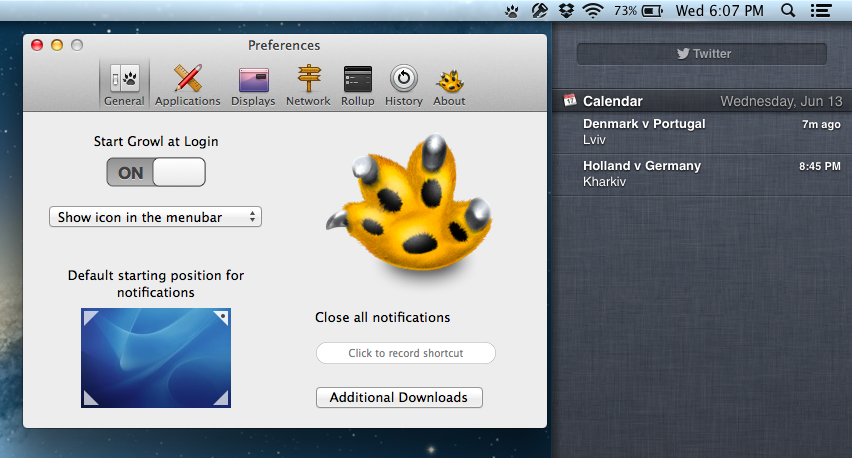 Developers of Growl, the popular third-party notification app for OS X that received a major update with version 1.3, announced today their plans to embrace Apple’s Notification Center on Mountain Lion, and allow developers an easy integration with the Mac’s upcoming native notification system.

With a blog post published earlier today, lead developer Chris Forsythe laid out plans for a future version 2.0 of the app:

For Growl 2 we’re simply going to add a Notification Center action display as well. This is going to make it easy for anyone who wants to see notifications in Growl, and also in Notifcation Center. We don’t know of any downside to doing this, and see it as sort of a simple yet powerful way to get what you want done. There may be some caveates to doing this that we can talk about once 10.8 is out, but there may not be. We’ll all just find out together.

This will be achieved with a new architecture that will enable Growl to handle visual notifications and actions separately:

Let me give you an example of how this would work. You could have a Smoke display, and the MailMe action fire from the same notification if you wanted. This is great and makes things really powerful.

As we’ve already written, the introduction of Notification Center won’t necessarily “sherlock” Growl as a notification alternative for Mac users and developers. While Notification Center will undoubtedly provide an excellent native solution for developers of Mac App Store apps – ultimately serving the average user with a notification system that works out of the box, – Growl will still remain a capable third-party app that offers fine grained controls over notifications with several customization options.

Furthermore, because Notification Center will only work with Mac App Store apps but Mountain Lion will still support external software through Gatekeeper for enhanced security, Growl will also be a fantastic way for developers of apps sold outside of the Mac App Store to enable desktop notifications in their software.

You can read the technical details on the future of Growl over the the official blog. Growl is available on the Mac App Store for $1.99.