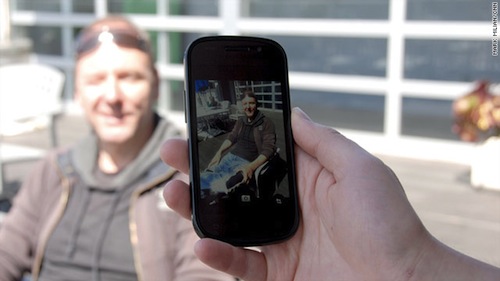 CNN reports today Google is working on a brand new facial recognition application for mobile devices, allowing users to snap pictures of their friends and automatically be redirected to a person’s public Google profile. The details on the availability of the app are scarce – the CNN report doesn’t specify whether this new app is being developed for Android or iOS devices – but it still provides insight into Google’s latest experiment that should revolutionize the way people interact with each other using mobile phones.

The app doesn’t have a name just yet, nor did any screenshots surface. But, as confirmed by engineering director Hartmut Neven, the project is being heavily tested at Google Labs with a specific focus on privacy concerns – which have always been an issue for a large company like Google that has access to millions of people’s data, email, profile information, and so forth. The app promises multiple scenarios of interactivity: a user could take a photo and automatically check out a person’s Google Profile (Google recently redesigned Profiles to make them more public and, looking forward, similar to Facebook) or browse photos shared on Facebook, Twitter and Flickr to see whether the algorithm developed by Google can recognize photos shared on social networks. However, Google told CNN that they’re looking to improve their privacy system and settings before the app is released.

Google acknowledges the nefarious ways someone could leverage facial-recognition technology. Many people “are rightfully scared of it,” Neven said. “In particular, women say, ‘Oh my God. Imagine this guy takes a picture of me in a bar, and then he knows my address just because somewhere on the Web there is an association of my address with my photo.’ That’s a scary thought. So I think there is merit in finding a good route that makes the power of this technology available in a good way.”

Neven and a Google spokesman described the facial-recognition app concept as “conservative” in relation to privacy.

It is very likely that Google will implement an opt-in system of sorts to allow users to tweak their privacy settings on various levels and enable the facial recognition software to have access to personal information. For example, Google could make sure that only “friends” or “friends of friends” can snap pictures and be redirected to a Google Profile in the browser, or the mobile app. Google isn’t new to image recognition technologies on mobile phones: their Goggles app, also available for iPhone, lets users take pictures of real-life objects and get relevant search results for the recognized product. The Goggles app can also recognize ads, and play Sudoku. Last year, Apple bought a Swedish company specialized in facial recognition and has been rumored to be willing to implement the technology in iOS since then. Apple also does facial recognition on the desktop with iPhoto, which can recognize contacts in photos and automatically sort people with the “Faces” interface.

Update: In an interesting twist of events, Google has reached out to claim that the CNN reporter “invented” the story about facial recognition linking to public, personal data. Engadget reports:

Google has reached out to clarify that there are no plans to introduce functionality of this sort yet, not without “a strong privacy model in place.” More importantly, however, the linking of facial recognition to personal data is described as “inventions of the reporter” rather than something the company’s actively pursuing.

Update #2: A CNN spokesperson sent us a statement about today’s Google story. CNN stands by their report, thus adding more questions as to whether or not Google is really building a mobile facial recognition product, but doesn’t want press or consumers to speculate about it just yet.

Google’s claims do not fit the facts of the situation. This interview was prearranged – on the record – and staffed by a Google PR rep, who raised no objections at the time and did not deny what the engineer said. Additionally, we have an audio recording of the interview, as does Google. We stand firmly behind Mark’s reporting.

Ultimately, search is not just the web but literally all of your information – your email, the things you care about, with your permission – this is personal search, for you and only for you.

We can suggest what you should do next, what you care about. Imagine: We know where you are, we know what you like.

A near-term future in which you don’t forget anything, because the computer remembers. You’re never lost.