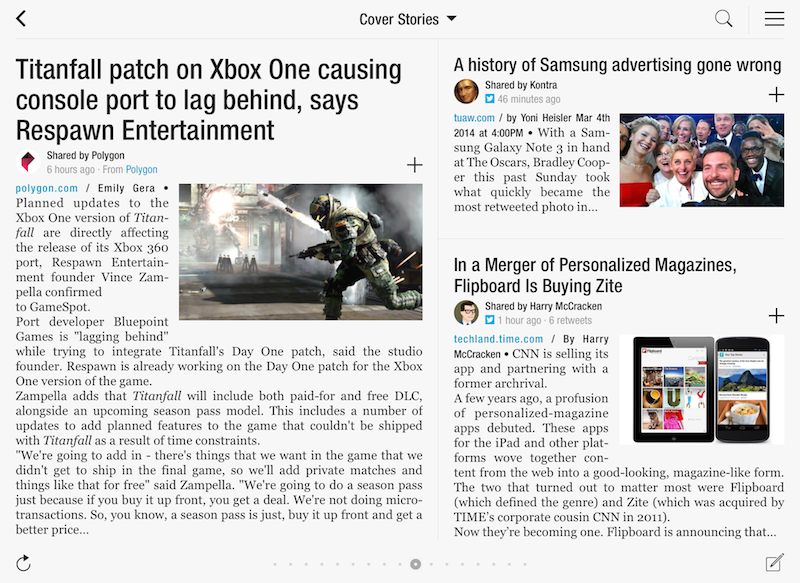 Zite, the personalized magazine that categorizes news based on popularity and reader interest, has been acquired by Flipboard, the social magazine that defined the genre back in 2010. According to TechCrunch, Flipboard acquired the company from CNN (which bought Zite in 2011 for $20 million) for a deal valued at $60 million and that includes CNN content (feeds and special magazines) coming to Flipboard in the future.

Flipboard and Zite has always shared some similarities: both companies started as iPad apps, and they both enabled readers to discover interesting articles by intelligently scanning sources from Twitter, Facebook, and other social services. Unlike Flipboard, however, which has been focusing on its editorial and user-created magazine efforts in the past couple of years, Zite has continued to prioritize automatic, algorithm-based discovery of content: Zite had a mechanism that allowed users to vote for the quality of articles offered by the app, as well as a propretary engine to analyze web trends, topics, and user interests to further filter articles.

In a blog post, Zite co-founder and CTO Mike Klaas has confirmed that the Zite app will be discontinued, although tools to migrate accounts and user data to Flipboard will be offered to existing Zite users. In a separate post on LinkedIn, Zite CEO Mark Johnson announced that, unlike the rest of the Zite team, he won’t be joining Flipboard, and that the combination of the two companies will be an “epic force”.

Behind the deal, what’s interesting is the kind of technology that Zite will bring to Flipboard. Besides the obvious social aspect that enabled Zite to look at links shared by a user on Twitter and other services, Zite had built algorithms to calculate the credibility of a user, match names and places in articles, characterize writing style and parts of speech with semantic classifiers, collect article metadata, and analyze context with text mining techniques to better summarize content. And these were just a part of the system Zite had in place: as the company detailed two years ago, Zite could collect and match user interests over time, aggregate reading habits and interests of a community of users, and find relationships between similar articles and related topics.

The interest graph and artificial intelligence that Zite created has high potential for Flipboard, which has long allowed users to browse Cover Stories, a feature that shows popular articles (based on the Ellerdale tech that Flipboard acquired in 2010), but that isn’t as powerful as Zite for discovering new, interesting stories.

Flipboard, launched in July 2010 three months after the debut of the original iPad, has now over 100 million users, and recently started rolling out an update to their Cover Stories layout to organize articles by source, social network and topic.