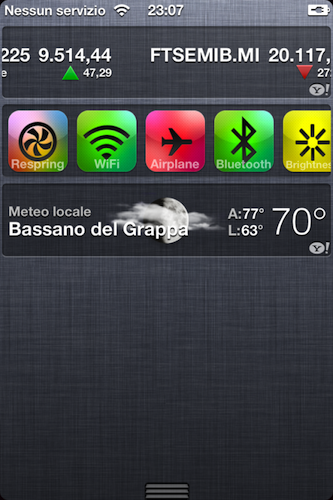 A few hours after the release of redsn0w for iOS 5 beta 1, some developers found out it was technically possible to develop widgets for iOS 5. In the new OS, in fact, Apple is restricting the use of “widgets” (they don’t even call them this way) to the Stocks and Weather applications, which, through the Settings, can have a “widget” or “ticker” in the new Notification Center. Currently, the widget section of Notification Center can only be used on the iPhone, as the iPad didn’t get the functionality for some reason.

iSpazio reports [Google Translation] the first third-party, fully functional iOS 5 widget has been released in Cydia, and it’s called UISettings. Available for quite some time in Cydia as an extension of the multitasking bar, the app has been completely rewritten to work as a widget under iOS 5, providing shortcuts for a system respring, a WiFi and Bluetooth switch, as well as AirPlane mode and Brightness controls. The concept’s similar to the popular SBSettings tweak, though UISettings is limited to a handful of shortcuts and controls.

The widget can be downloaded from the developers’ beta repo (http://qwertyoruiop.com/beta), and a new version is already in the works. The possibility of developing and releasing custom widgets in Cydia may offer an interesting alternative to Apple’s restrictions if the company decides to prevent developers from building third-party widgets in iOS 5, although everything can change come the final release of the OS this summer. Apple may even announce new Store sections for widgets (or Safari extensions) and surprise developers a few weeks ahead of iOS 5’s release. This is just speculation on our side however, so in the meantime you can download UISettings and check out how a custom widget integrates with Apple’s Notification Center.