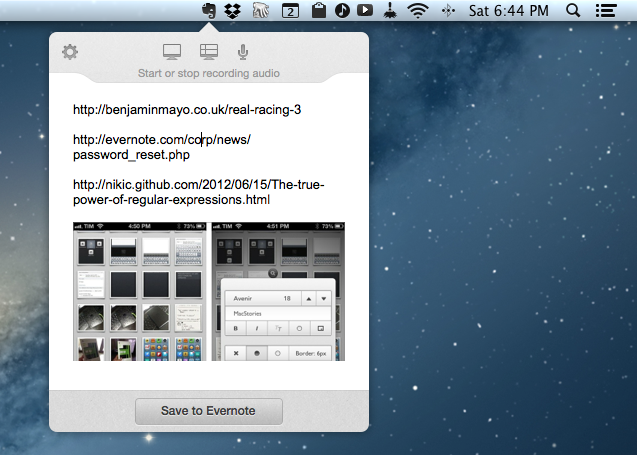 Alongside a notice to warn their users of a security breach, Evernote released today an update to their Mac app, which reaches version 5.0.6. For now, the update is only available for versions of Evernote downloaded outside of the Mac App Store.

According to the changelog, the update “addresses a security issue that requires you to reset your password”. It’s unclear how Evernote for Mac may have affected the security of passwords of the service, but Evernote says more details will be posted on their blog.

The big new feature of Evernote 5.0.6 is the redesigned menubar helper: called Quick Note, it is a new popover that accepts input to quickly create new notes in the application; the popover can be invoked by clicking the Evernote icon in the menubar, or by hitting the CMD + Control + N shortcut. Aside from a large content area, the popover features buttons to clip the entire screen or a portion of it, a microphone button, a shortcut to save a note in the app (which can also be done with Command + Enter), and a settings icon to quit the app and access other preferences.

The nice thing about Quick Note is that it accepts three kinds of inputs and doesn’t save a note until you tell Evernote to do so. You can type or drag plain text into the Quick Note, drop images, and start new audio recordings inline. Because dropping items onto the menubar icon doesn’t automatically save a note, you can, for instance, drop URLs, bits of text, and images as you browse around the Internet, and only later save them as a single note. While in the Quick Note, URLs will be visualized as plain text, but once saved in the app Evernote will correctly display them as hyperlinks.[1] When saving a note, Evernote will use the first line of the Quick Note popover as title.

One minor annoyance I have with the Quick Note is that, when dropping URLs or text selections from the browser, the app doesn’t automatically move the cursor to the next line. If you’re, say, planning to clip multiple browser tabs in the popover, you’ll have to remember to add a new line between URLs, otherwise Evernote won’t do it for you.[2]

Evernote 5.0.6 also comes with a new Premium feature to search across Office documents, a Premium tab in the sidebar (that you can hide), and possibility to select multiple tags in the sidebar by Command-clicking them (I haven’t been able to get this to work).

Evernote 5.0.6 is available through the in-app Software Update.