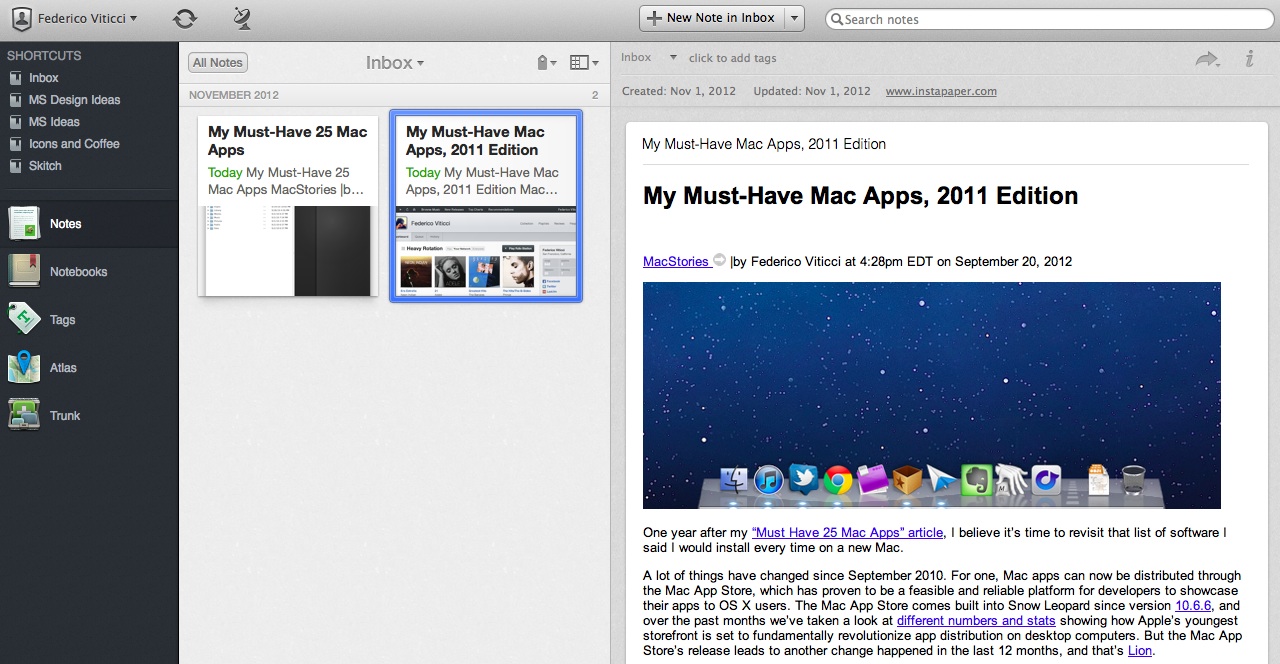 Announced last week, Evernote has today released version 5.0 of its Mac client as a public beta. Sporting a redesigned interface and over 100 new features, Evernote 5.0 is a complete rethinking of the desktop experience, built with easier access to most used notebooks and notes in mind. As I wrote last week:

Evernote 5 will primarily focus on improving the way users manage and access their notes, tags, and notebooks. With a new sidebar, users can drag items into the Shortcuts area; user shortcuts are accessible using CMD+1/9 keyboard shortcuts – just like bookmarks in Safari. Advanced users will still be able to “show lists” in the sidebar, but, overall, according to Evernote, the redesign will be focused on making the sidebar more visual, compact, and easier to use. In fact, the new sidebar will also list the five most recent notes for quick access. Evernote says there are over 100 new features in v5.0. These include a new iPad-like Cards view for notes, improved sharing, a new look for the notes editor, more keyboard shortcuts, new views for tags and notebooks, and more.

The new interface is primarily based on the new sidebar, which lists all the “shortcuts” created by the user. A shortcut can be a notebook, a tag, a note – anything that can be selected and dragged in the app can be manually placed in the Shortcuts area. 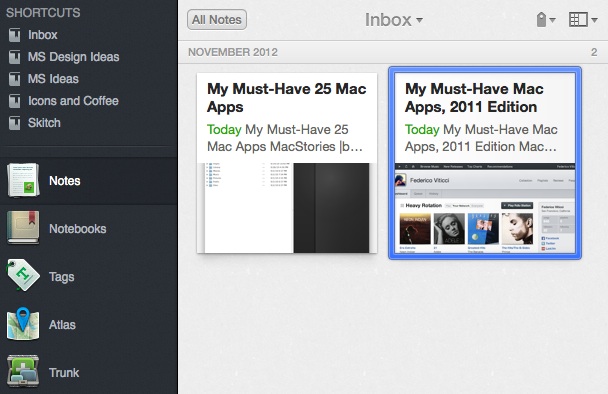 From a first tests, as an Evernote user I can say the overall design of the app is cleaner and less cluttered, but still – at least for me – comfortable to navigate around, and quite possibly even better thanks to Shortcuts, which I’m a big fan of. I look forward to seeing how Shortcuts will fit in my daily workflow. For now, I appreciate the choice of making the top toolbar simpler – there’s only a “New Note” button in there, which can also create notes in your recent notebooks – while enhancing the functionality of the sidebar in new ways.

The selection of keyboard shortcuts and contextual menus seems to be the same of Evernote 3.3 so far, and I’m happy to report my AppleScripts didn’t break after the update, which was an easy process (it only required to wait a couple of minutes for notes “migration”).  The note editor has a different design, but the functionalities appear unchanged; I like the new Cards navigation for notebooks (although I still prefer “Snippets” view), and I find the new sorting options better organized and more useful. I particularly like how Evernote built in some filters to let you easily include/exclude notes created from Hello, Food, or Skitch. This speaks to the degree of rich ecosystem Evernote has created, but I was surprised to see Penultimate was absent from my filters. 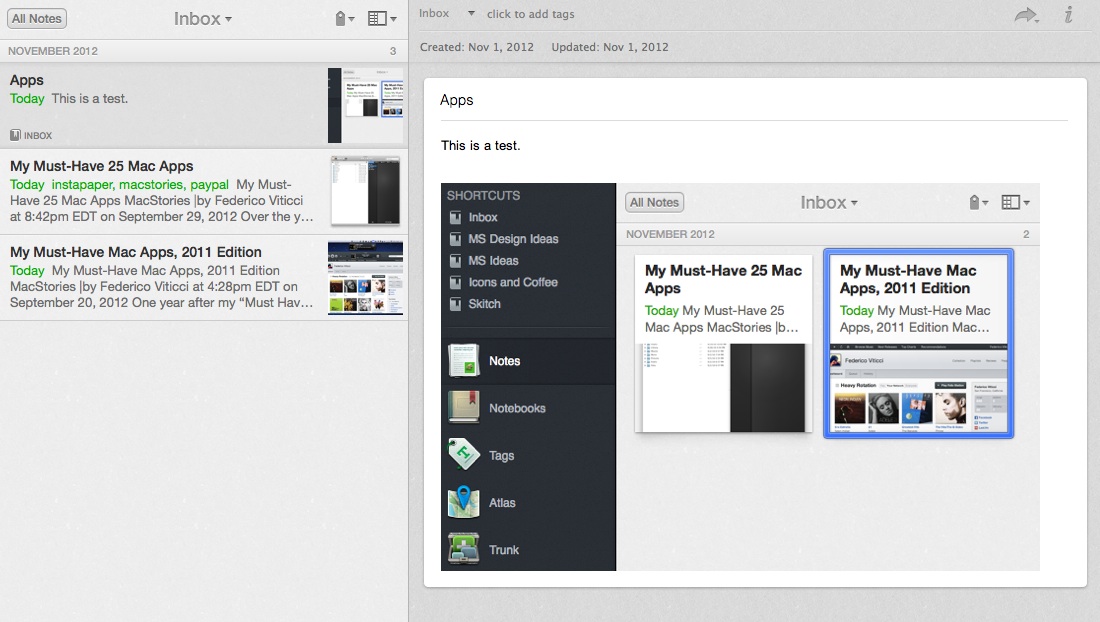 The new horizontal view for Tags and Notebooks is beautiful and easy to scan. You can rearrange items on the fly by Name/Count/Date Updated, search among tags and notebooks, create new ones quickly, open and close notebooks to view all notes (this will change the current section in the sidebar), and more. 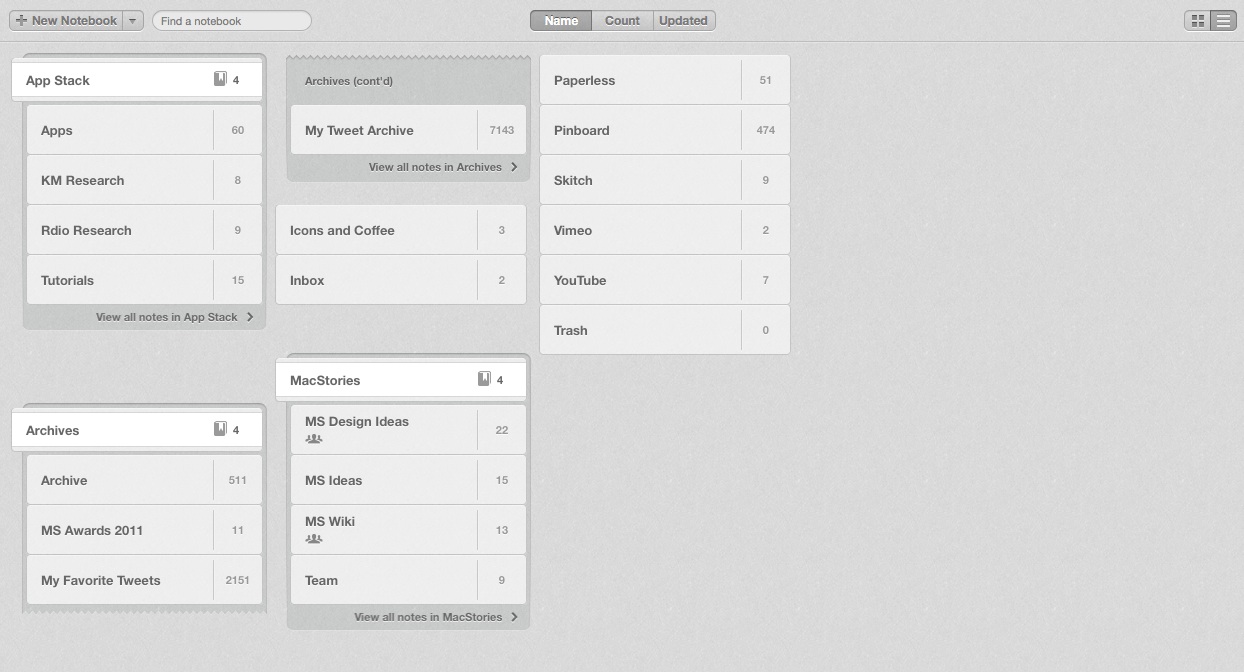 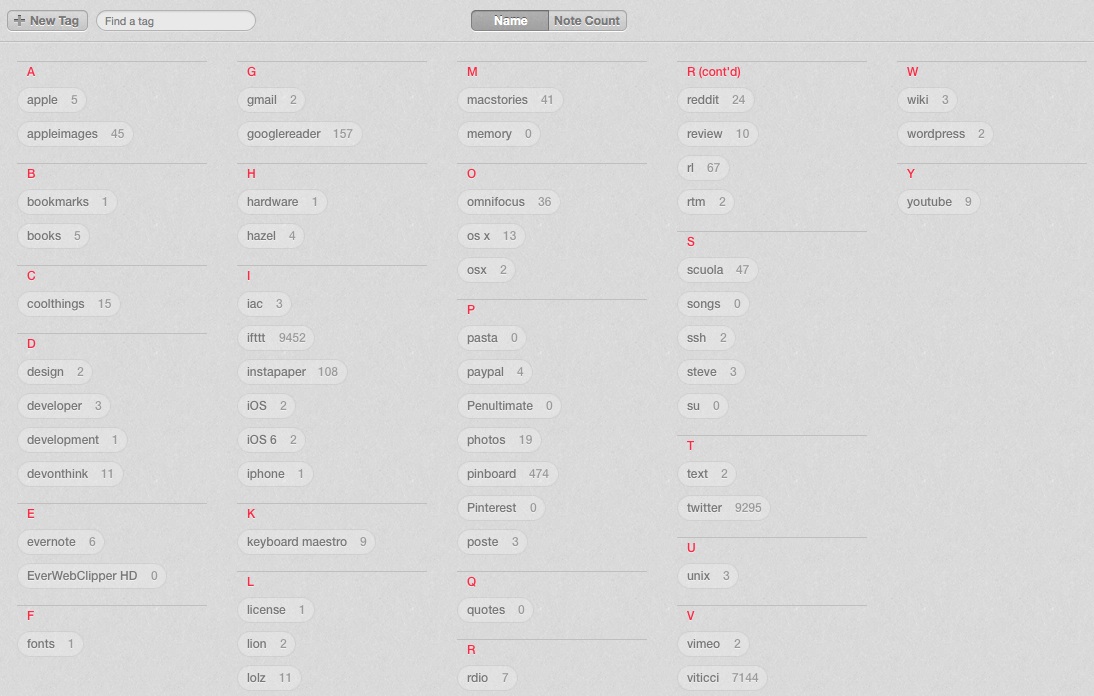 Atlas is interesting. It looks great, but it assigned some of my notes to locations in the United States I have never visited (this, obviously, is related to the beta nature of the product). I have no particular use for Atlas as I rarely attach location to my notes, but I suppose it’ll be a great addition for users of Hello and Food. 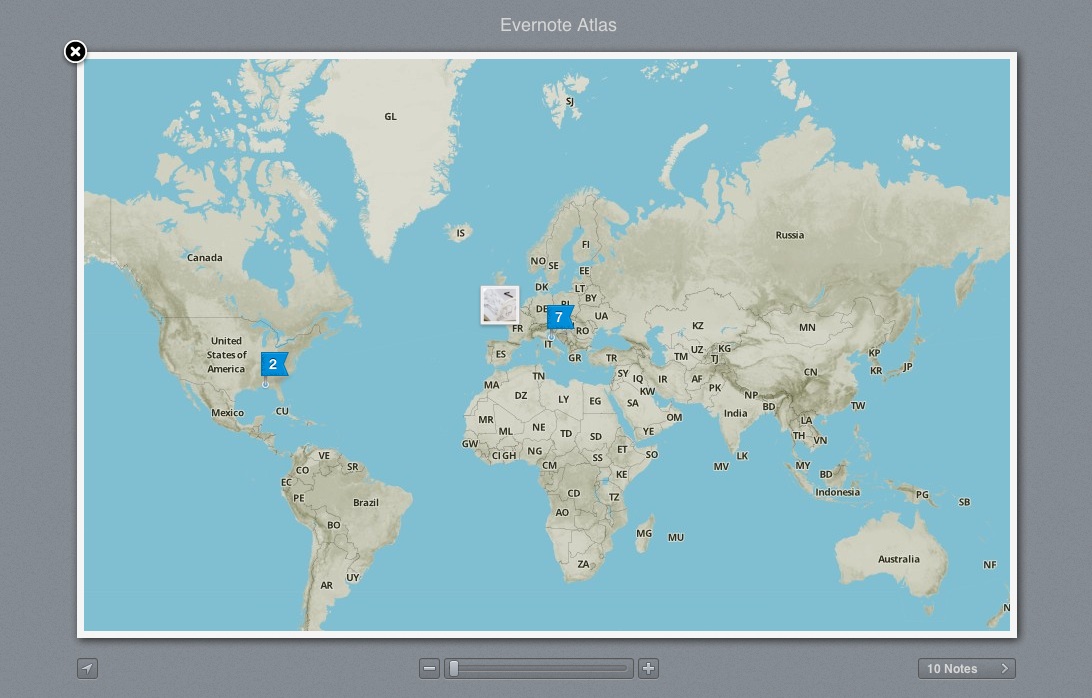 I wouldn’t be surprised to see Evernote considering a standalone photography product soon, as it seems like a perfect fit for Atlas’ map view.

I like what I’m seeing so far in Evernote 5.0, and I hope the Evernote Mac team will come up with an even better app for the final version. Make sure to check out Evernote’s blog post for details on how to update to 5.0 beta and a video.