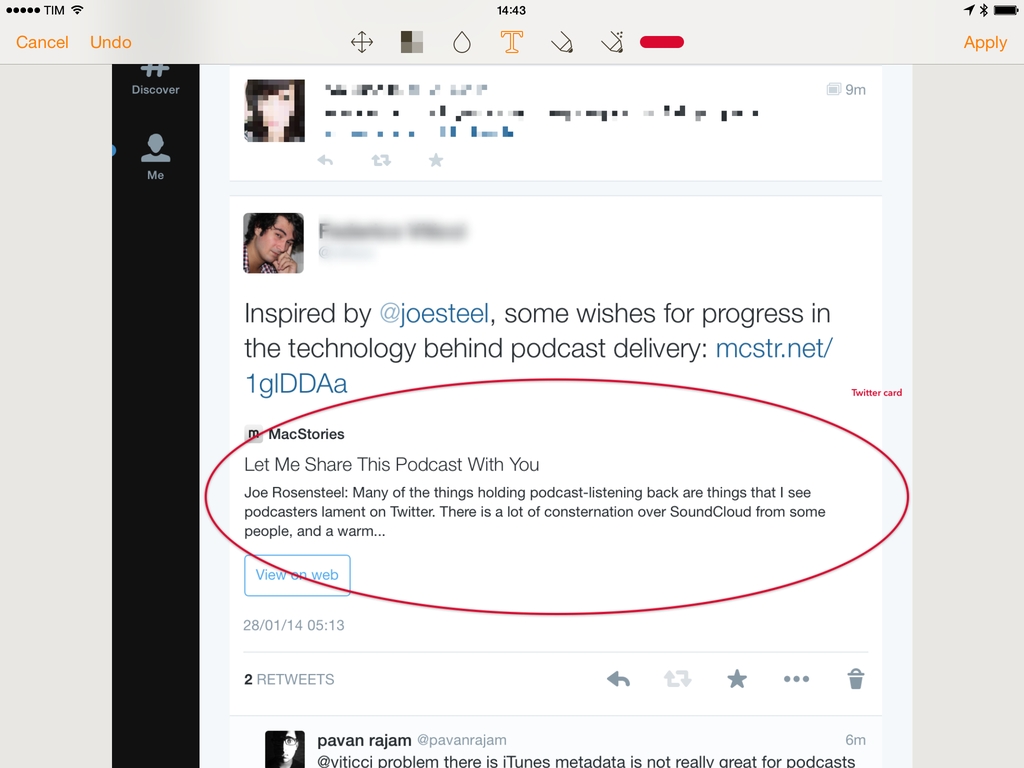 Ember for iOS, Realmac’s image organization app for iOS first released in December, has been updated today to version 1.1, which starts bringing some of the Mac app’s features to the iPhone and iPad as In-App Purchases. In this release, Realmac added support for Annotations and Screenshot Auto-Import as two separate IAPs priced at $4.99 and $0.99, respectively. The app is still free, and can be used with iCloud sync as a companion utility to the full Ember for OS X experience.

Ember is an app to collect and organize images, and the iOS app, especially on the iPhone, has the convenience of having a camera always available. Therefore, adding annotations to iOS is the right move for Realmac, as users who depend on Ember for pictures they take are likely to take those directly on iOS. In the app, you can now use the Smart Drawing, freehand, and text tools that Realmac first brought to Ember for Mac months ago; new to both Ember for iOS and OS X (the Mac version has also been updated to 1.3 today), blur and pixelate tools let you obfuscate parts of images that you don’t want anyone else to see.

Ember’s annotations tools on iOS are like a simpler version of Skitch. There’s a toolbar at the top of the screen with available tools, and edits can be drawn on screen by touching and swiping; once added, they can be rearranged on the canvas, but they can’t be manually resized with a pinch gesture like Skitch. In my tests, I found that I couldn’t make text annotations bigger, as Ember kept using a font size too small for my taste; I then realized that to change annotation size, you have to tap the color popover, which gives you three sizes to choose from.

Overall, Ember 1.1 provides a mix of the functionalities seen in Marco Arment’s Bugshot and Evernote’s Skitch, only in an app that syncs with iCloud across devices, including the Mac. At this point, the major feature missing from Ember for iOS is Subscriptions, which I assume will be added at some point as another In-App Purchase in the Ember Store.

It will be interesting to see how Realmac will keep adding more functionality to Ember on OS X in the future while trying a different business model on iOS. Right now, the annotations tools aren’t as flexible as Skitch in terms of manual editing options, but they work well and they’re easy to use.

Ember for Mac is available at $49.99 on the Mac App Store, with a free trial available from Realmac’s website. Ember for iOS is free on the App Store with In-App Purchases.