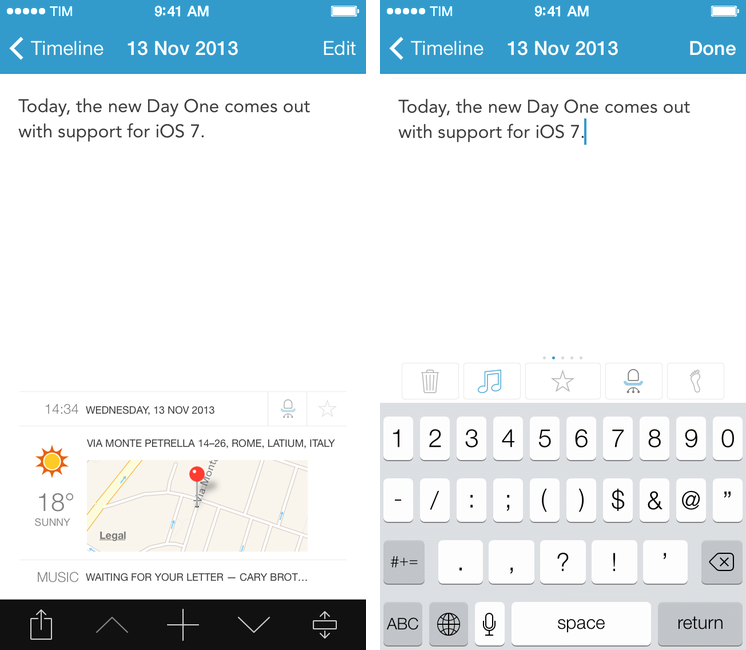 Day One, my favorite journaling app for iOS and OS X, has received an update today that brings a visual refresh for iOS 7, support for background fetch via Dropbox, and new data tracking sources.

Since its inception, Day One has been about adding context to your diary by using features of iOS and OS X that augment the classic journal in ways that paper never could. It was only last year, however, that Bloom Built’s vision could come to fruition with support for photos, weather data, and location information available right into your daily journal. Since then, Paul Mayne and his team have been hard at work to ensure that Day One could have feature consistency across platforms as well as take advantage of online data and Apple’s latest OSes and technologies.

Today’s new version for iOS is, again, all about data, sensors, and additional context for your journal entries, which are no longer limited to text and pictures but now span a bevy of tracking points such as date and time, tags, weather, location, activity tracking, and steps taken.

The aspect that immediately jumps out is the iOS 7 redesign of the app, which gets rid of shadows and textures to embrace brighter colors, simpler backgrounds, and thinner icons in the menus and editing toolbar. Day One wasn’t a champion of skeuomorphism before, but this update reinforces the app’s clean design with adjustments that make it look good on iOS 7. I like it.

Forecast.io has been added as a weather source: in the Settings, you can choose between Forecast (works best for the US and UK) and HAMweather (works best for me in Italy), but, regardless of the selection, Forecast.io data will always be used for historical weather information beyond 10 days (one of the nicest features of Day One is being able to add old photos and see the app adding context to them by pulling old weather data).

Aside from 64-bit support and various bug fixes and speed improvements, Day One’s entry editing screen has received a substantial update with new buttons to add information about the currently playing song, your activity, and steps recorded by the iPhone 5s’ M7 motion coprocessor. Like in previous versions of the app, these new data points are optional and you’re not forced to add them to an entry; if you do want to give further context to an entry on any given day or moment of your life, they’re only a tap away in the editing toolbar above the keyboard.

I haven’t been able to test the daily step count feature because I don’t have an iPhone 5s (yet), but I believe that these new options are clever additions to Day One and they fit with the app’s underlying theme – being able to record your thoughts with context thanks to modern technology without being creepy about it.

In my tests, I wasn’t able to make the music button work with Rdio, as I later discovered that the app can only fetch track information from Apple’s Music app. When a song is recognized, it is added as a metadata piece to an entry and you can tap on it to view it in the iTunes Store. It would be nice to see support for any app that handles music playback, such as Rdio or Spotify, and perhaps podcast clients too. If you want, playing music can be automatically added to entries by checking an option in the app’s advanced Settings.

Activity tracking should be captured automatically on the M7, so that Day One will be able to tell whether you’re sitting, walking, running, or driving. If you don’t have an iPhone 5s (I wasn’t able to test the app on the Retina iPad mini I bought yesterday, which also has an M7), you can add motion activity manually choosing from a list that includes more options such as “eating” and “flying”.

I don’t think that the addition of new data points for motion and music clutters Day One; in fact, I think that going after iOS’ new motion activity log is an obvious next step for Day One, and I can only imagine how the app could evolve in this direction in the future if Apple will decide to ship more motion and fitness-related features. Day One has long been more than just a text journal, and today’s update reinforces the app’s focus on data and context with a nice new design.