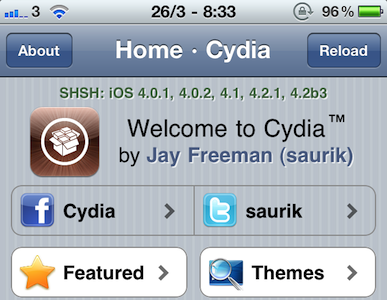 Jay Freeman, a.k.a Saurik just tweeted out that Cydia 1.1 is out; the update focuses on being even “faster, slimmer and more stable”. It also adds an improved search algorithm and a “resume where you left off” feature in what is a really solid update to the app. To get the update all you need to do is run Cydia and it will prompt you to run some updates.

Cydia 1.1: faster, slimmer, and more stable; including an improved search algorithm and “resume where you left off”. Available in Cydia now!

Many people will be glad to hear that speed has most definitely been improved in the app and it is now far quicker at loading to a fully loaded state as well as checking for updates, searching and loading the various categories of repositories. As Freeman says in his tweet, there is a new search algorithm, which as he explained in a comment earlier this month includes “an integer-arithmetic radix-sorted relevancy algorithm” which does make a little bit of difference from my quick testing. Perhaps more helpful is that the search results screen has been tweaked to make the results slightly smaller so that more can fit on the screen at any one time, helpful to quickly scan across the results to the one you want.

One of the oft-requested features for Cydia was support for multi-tasking, however as Freeman explained in some comments, this is not feasibly possible because of the requirement that Cydia run as Root whilst SpringBoard (which controls the suspension and resumption of apps) does not, meaning it could not control Cydia like it can a normal app and let it run in the background. However in Cydia 1.1, Freeman has managed to largely resolve the issue of multi-tasking with a “resume where you left off” feature which lets you quickly (I experienced less than 4 seconds wait time) get back to exactly where you were in the app, whether it be on a search page or inside a section folder.