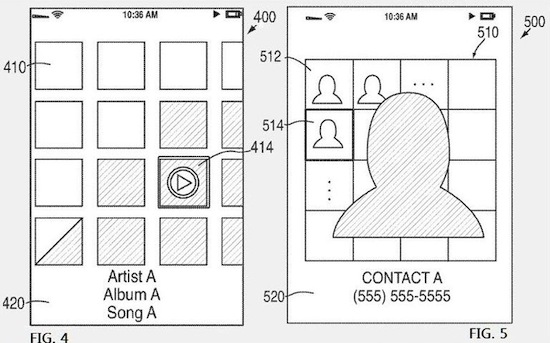 A new patent design uncovered by Patently Apple today gives us a hint at some interface elements Apple may implement in future versions of iOS, perhaps as soon as iOS 5 is released later this year. The patent doesn’t provide many details and the mockups realized by Apple are nowhere near the final style of an iOS product, but they can let us speculate on the interface changes several apps will likely go through.

In this patent, Apple has focused on browsing the iTunes Store and accessing the Address Book. The main concept seems to be that raw lists of items – songs, artists, and even contacts – should evolve into a visually richer experience based on “tiles”, rather than vertical lists. Does that ring a bell? Yes, at first I thought of the Windows Phone 7 UI – but the implementation Apple is envisioning here is quite different. From what we can see in the sketches posted online, the design looks like a mix of the Finder’s standard icon view and the iTunes album art screensaver: there’s a grid containing albums and songs in the iTunes Store and a different contact visualization in Address Book with a series of thumbnails for all your friends, and a bigger one in the foreground for the contact you’re currently talking to / editing in the app. Apple is calling these things “Segmented Graphical Representations”, and from a first look it sounds like they’re aiming for a more visual interaction with the OS based on thumbnails and graphics, rather than lists of text.

Whilst it’s unclear from the patent whether Apple is planning on redesigning iTunes Store music sections or the iPod app as well, it certainly appears that in the future iOS will adopt a fresh approach to browsing: less text, less paper-like lists and more thumbnails – perfect for touch input. The same approach can be seen in the Address Book section of the patent, which details something very similar to third party apps like Favorites for iPhone:

Apple appears to really like this new tiled UI element and is likely to take it beyond its use in the iTunes Store. In fact, Apple is thinking of extending it to other iOS elements and in patent FIG. 5 we see such an embodiment: A new Address Book format.

By tapping on a photo thumbnail, users could easily decide to call a contact, send an SMS, email him or FaceTime. Again, a much more intuitive process than scrolling a list and having to tap your way around dozens of menus and buttons. Plus, if you think about it, Apple could integrate this fancy Address Book redesign with the rumored social service they’ve been (allegedly) working on, giving every contact a profile picture and detailed information such as emails and usernames.

In the past months, other patents suggested Apple had been experimenting with the idea of a “more visual” iOS. The Spiral UI is the perfect example. The patent described above makes more sense in my opinion than a strange, spiral-like gallery of photos. Perhaps we’ll know more about the interface changes of iOS 5 in a few weeks.