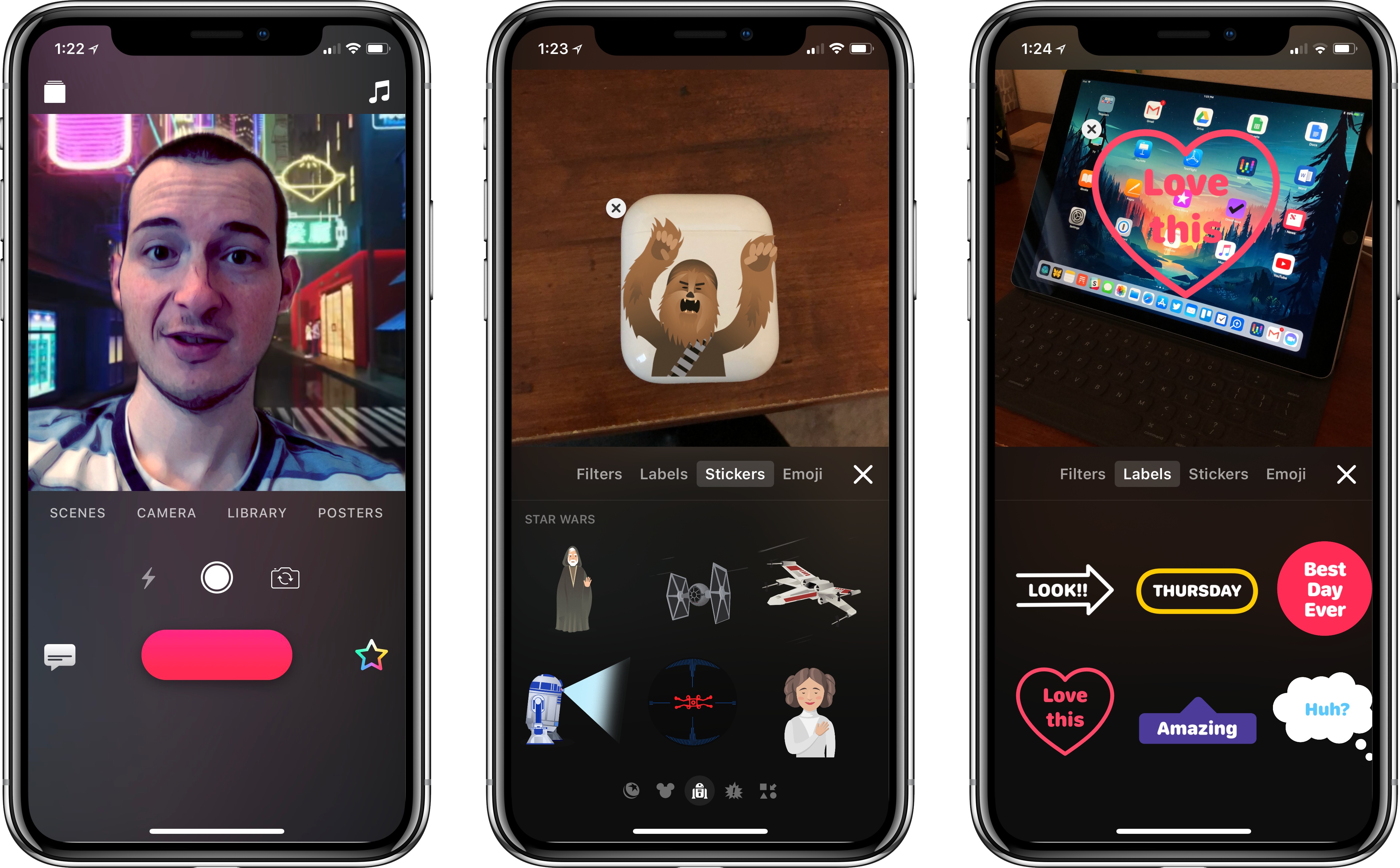 If you have an iPhone X, Selfie Scenes are definitely the biggest draw of this release. Each of the twelve included scenes places you on a different live background, which you can pan around to explore. You’ll experience different music and sound effects, and depending on the scene, even the way you look might change – for example, the included scenes from Star Wars: The Last Jedi make you into a convincing-looking hologram.

Selfie Scenes use the iPhone X’s TrueDepth camera to detect depth in front-facing video and, in real-time, replace the background of the shot with an alternative location. Scenes range from outer space, to a traditional cityscape, and an 8-bit world. There’s a lot of fun to be had here.

As is true of the new Portrait Lighting feature on iPhone X and 8 Plus, the results with Selfie Scenes can vary depending on certain factors, such as your hair style or accessories you’re wearing. In my testing certain scenes worked better than others – Brushstrokes was the worst offender, frequently cutting off parts of my head – but overall I was very impressed by how well the scenes worked.

Despite the fact that when choosing a Selfie Scene, it appears to fill the whole screen, once you get into recording mode you’re only able to capture in a square orientation, as before. 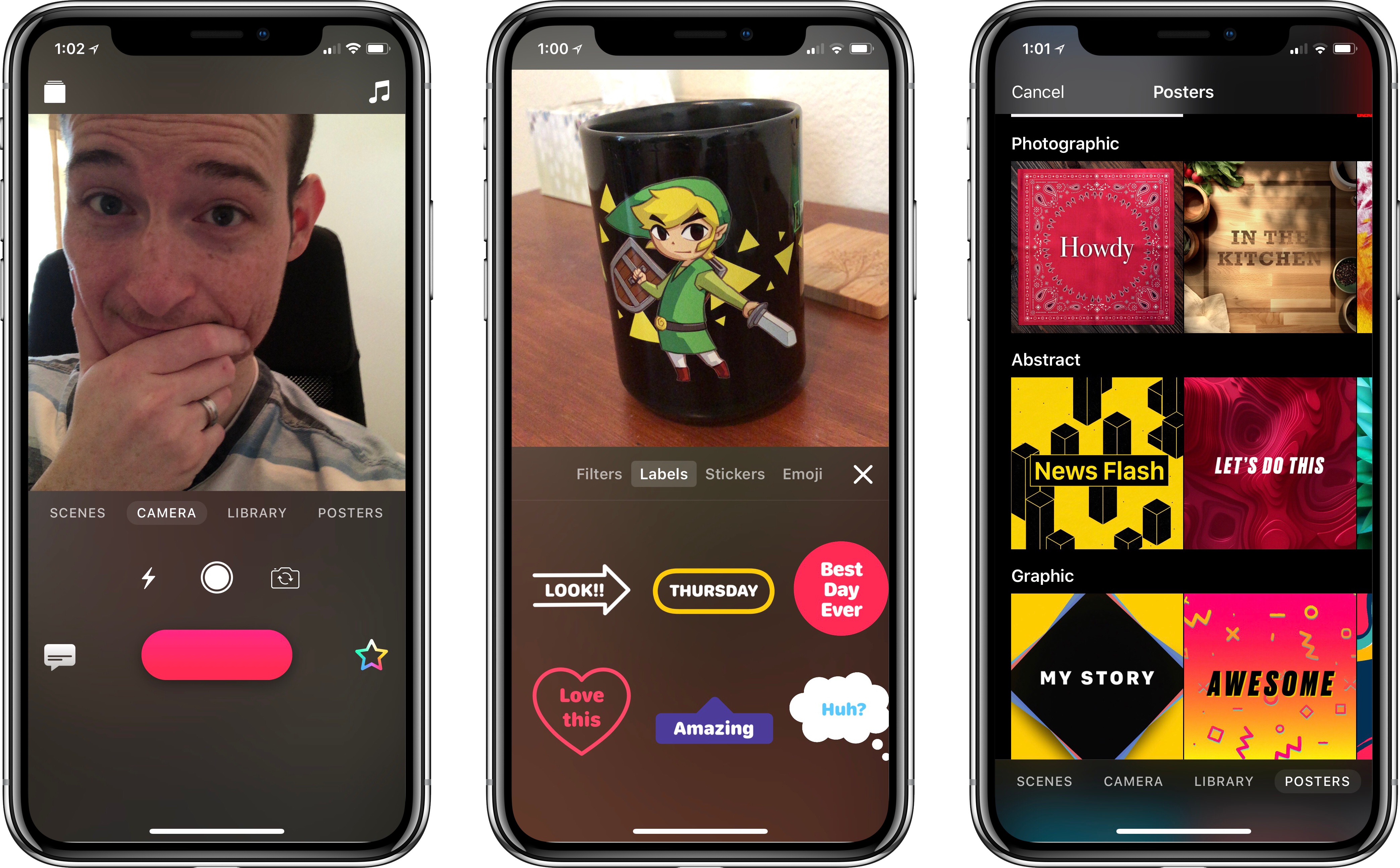 Some common remarks when Clips first launched were that it had a somewhat steep learning curve. Once you adapted, it was easy to use, but that learning period took some investment. Apple has sought to fix that problem by completely redesigning the app for version 2.0.

Everything in the app is now better labeled than before, and is laid out in a more intuitive design too. On the main screen, scenes and posters join the standard camera and library options. There’s no need for separate photo and video toggles anymore, thanks to the addition of a new photo button on the Camera screen. A rainbow star button houses filters, labels, stickers, and emoji – all a natural grouping since they’re objects you can layer on top of your content.

Overall, the redesign appears to be a simple adjustment for longtime Clips users, and should be easy for new users to pick up as well. 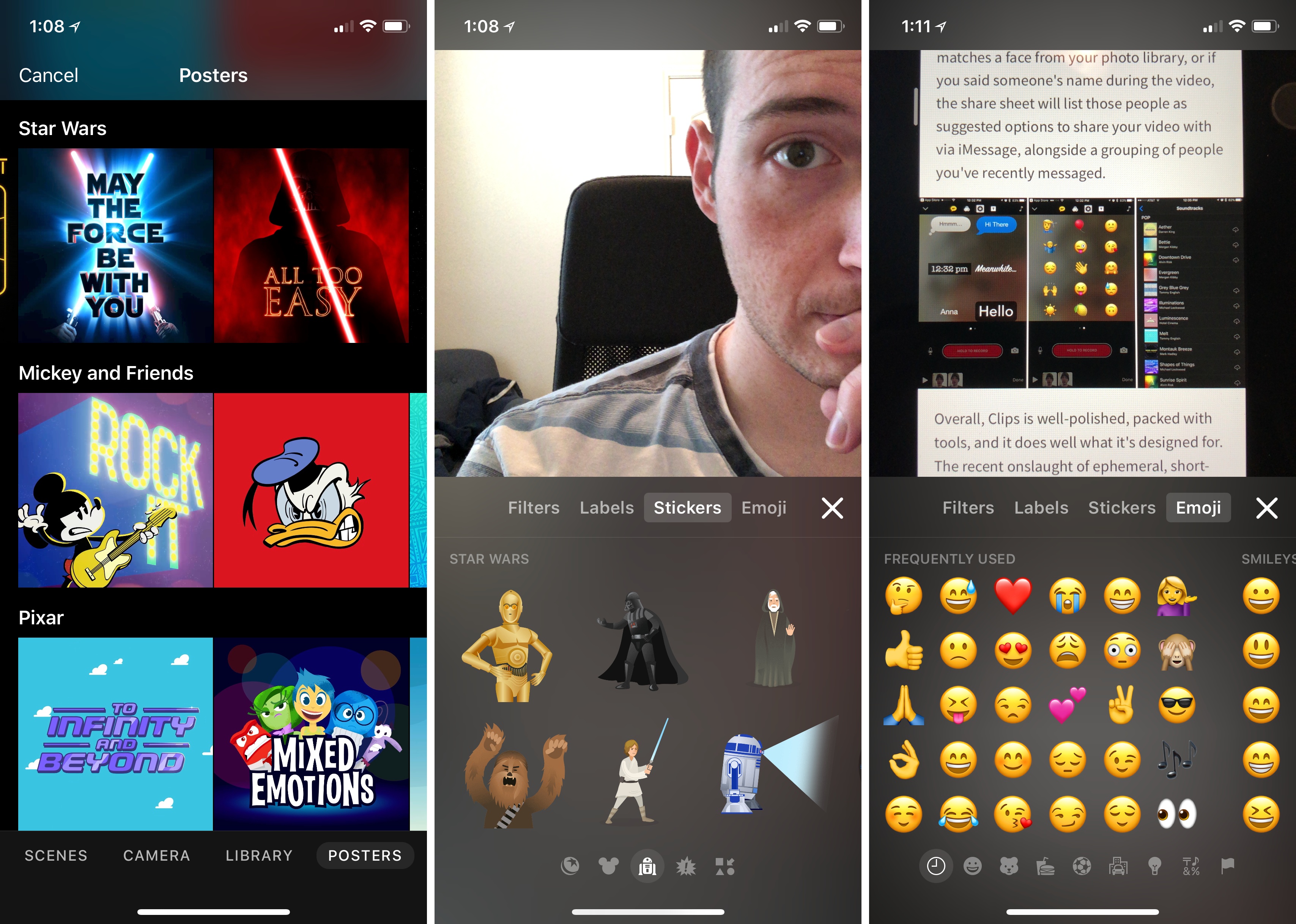 Following the addition of Disney and Pixar content in version 1.1, Clips 2.0 introduces Star Wars to the mix. Besides the two Selfie Scenes featured above, there are Star Wars posters and stickers here too, and they join a host of new posters, stickers, effects, filters, and soundtracks located throughout the app.

One much-appreciated fix is that the full emoji catalog can now be accessed within Clips – before, only a sampling of commonly-used emoji were available. Another low-hanging fruit I’d been hoping would get fixed some day: iCloud now automatically syncs all clips. So if you set up a new device from scratch, you won’t lose all your content like before. You can also now start a project on your iPhone, then edit later on your iPad. The iPad app still doesn’t support landscape, but iCloud support is a step in the right direction at least.

When Clips first debuted earlier this year, it was unknown what kind of support the app would receive from Apple going forward. Would it be another Music Memos, released to the public then largely left alone? While Clips 1.1 was an encouraging sign of life, today’s 2.0 clearly demonstrates Apple’s commitment to this app. And I’m glad for that.

Clips is a fun, simple utility that makes the task of video creation more approachable than it historically has been. While I still wish the app didn’t restrict users to making square videos, everything else about Clips makes it an app I hope sticks around a long time.