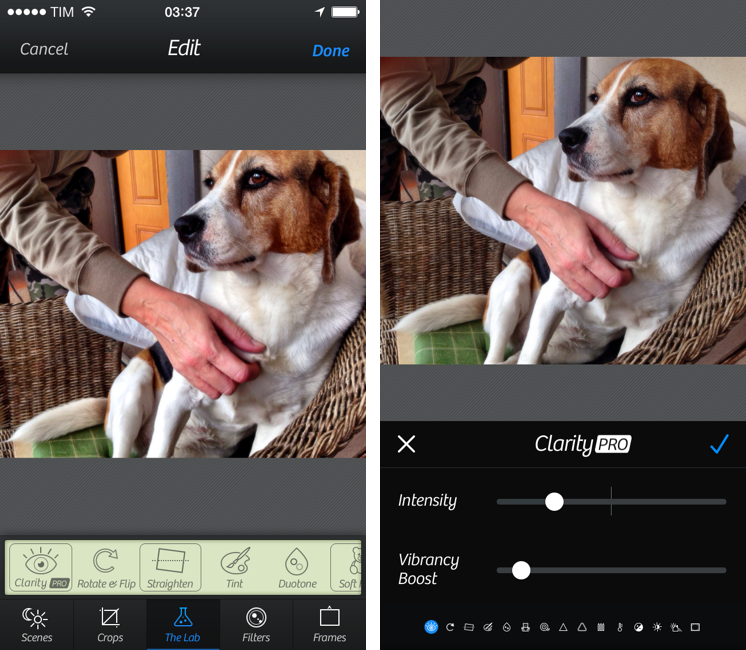 Released today as a free update for existing customers, Camera+ 5.0 for iPhone brings new editing features in a section called “The Lab”, redesigned icons, and interface updates to captions and filter layering.

In terms of user interface and experience, Camera+ still has the same underlying layout of Camera+ 3.0 (which I reviewed in March 2012). In September, Tap Tap Tap released version 4.0 of the app, which brought translucent bars, new transitions, and, generally, UI updates to match iOS 7’s look. Camera+ works in the same way as before, with a variety of controls for white balance, focus, and exposure available in the main camera view, where you can also find alternative shooting modes that include a stabilizer and timer.

Like version 4.0 three months ago, Camera+ 5.0 doesn’t change how you interact with the app, and, while I think that from a mere visual standpoint Camera+ looks nice on iOS 7, I wish Tap Tap Tap tried something a little more audacious with the editing tools, which are still organized and grouped in tabs (especially because they’re considering this version a major x.0 update).

The big addition of this update is The Lab, a section of the Edit screen that adds new free tools to Camera+:

I am not a professional photographer and I don’t usually apply filters to my photos or manually tweak their settings, but I was curious to try out the new features in Camera+ and I think that, for a free update, they’re a nice addition.

Clarity Pro, for instance, takes the app’s popular Clarity effect and allows you to adjust sliders for Intensity and Vibrancy Boost manually so you can choose just how much Clarity to want to apply to a photo. The Straighten tool lets you pinch and rotate with two fingers or tap on two buttons to straighten a photo, while other effects like Sharpen, Soft Focus, and Film Grain have a single slider. Settings for tools of the Lab section have a different design from the rest of the app, with black & white controls, blue highlights, and tiny icons at the bottom of the screen (you can swipe on the bottom tray to change tools). 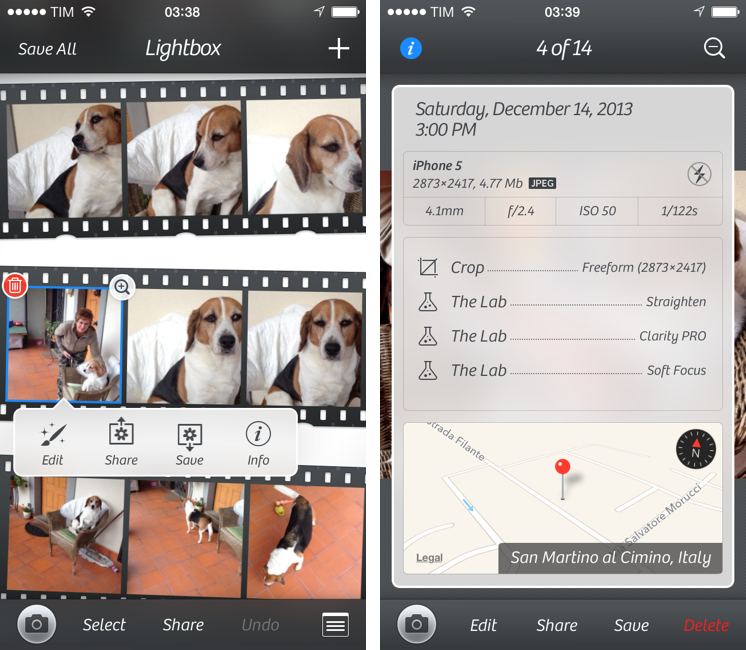 It’s not a new feature, but I still like how Camera+ displays photo metadata. Using a card-like popup, the app offers a clear display of date and time stamps, location info, camera model, and edits you’ve applied to a photo. You can swipe through photos while the popup is open and it’ll follow you around from screen to screen, and you can also view metadata before importing a photo from the Camera Roll by selecting one and tapping the Info button in the popover. I recently noticed that some of my photos show no time information when viewed in photo viewers for iOS and OS X, but Camera+ displays that just fine.

A lot of photo editing apps with advanced features have come out in the past couple of years, and, while not revolutionary, it’s good to see Camera+ adding new useful (and free) editing tools. You can get Camera+ 5.0 on the App Store.