The long-awaited OS X 10.6.5 update is finally out of the cage and available for you to download in Software Update. Mac OS X 10.6.5 is the the fifth maintenance update for Snow Leopard – version 10.6.4 was released in June 2010. 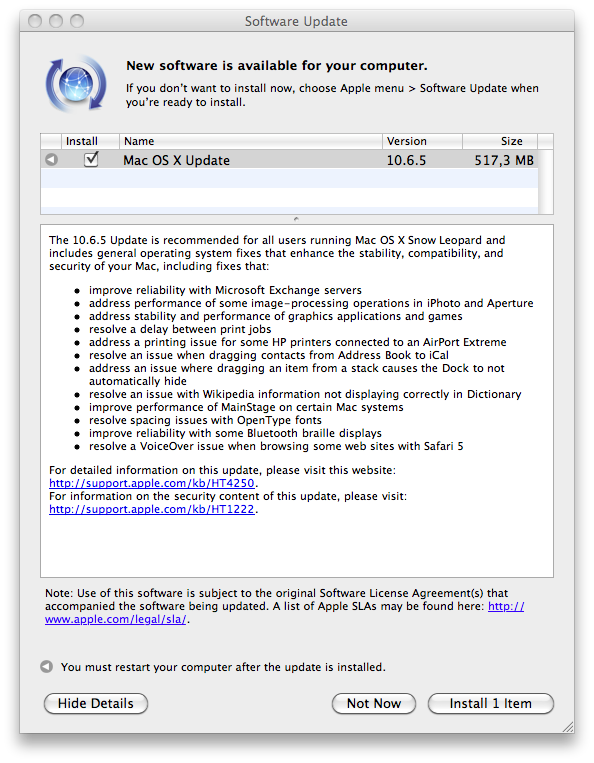 Improves reliability with Microsoft Exchange servers.
Addresses performance of some image-processing operations in iPhoto and Aperture.
Addresses stability and performance of graphics applications and games.
Resolves a delay between print jobs.
Addresses a printing issue for some HP printers connected to an AirPort Extreme.
Resolves an issue when dragging contacts from Address Book to iCal.
Addresses an issue in which dragging an item from a stack causes the Dock to not automatically hide.
Resolves an issue in which Wikipedia information may not display correctly in Dictionary.
Improves performance of MainStage on certain Macs.
Resolves spacing issues with OpenType fonts.
Improves reliability with some Bluetooth braille displays.
Resolves a VoiceOver issue when browsing some websites with Safari 5.
Improves Bluetooth pairing with Magic Trackpad.
Resolves performance issues with third-party displays that use InstaPort technology.
Add SSL support for transferring files with iDisk.
Resolves an issue when opening 4-up Photo Booth pictures in Preview.
Addresses keyboard responsiveness issues in the Dock when Spaces is turned on.
Resolves an issue syncing Address Book with Google.
Fixes an issue when replying to a Mail message sent by a person whose name contains certain characters such as é or ü.
Improves performance for users bound to an Active Directory domain.
Improves reliability of Ethernet connections.
Systems with a Mac Pro RAID Card (Early 2009) installed can now be put to sleep. For more information, see Mac Pro RAID Card (Early 2009): Enabling system sleep.
Improves reliability of fibre channel connections, resolving a potential Xsan volume availability issue.
Adds RAW image compatibility for additional digital cameras.
Security improvements; for information about the security content of this update, please visit this article.
Additional Information
This update also includes the improvements found in the Mac OS X v10.6.1, 10.6.2, 10.6.3, and 10.6.4 updates.