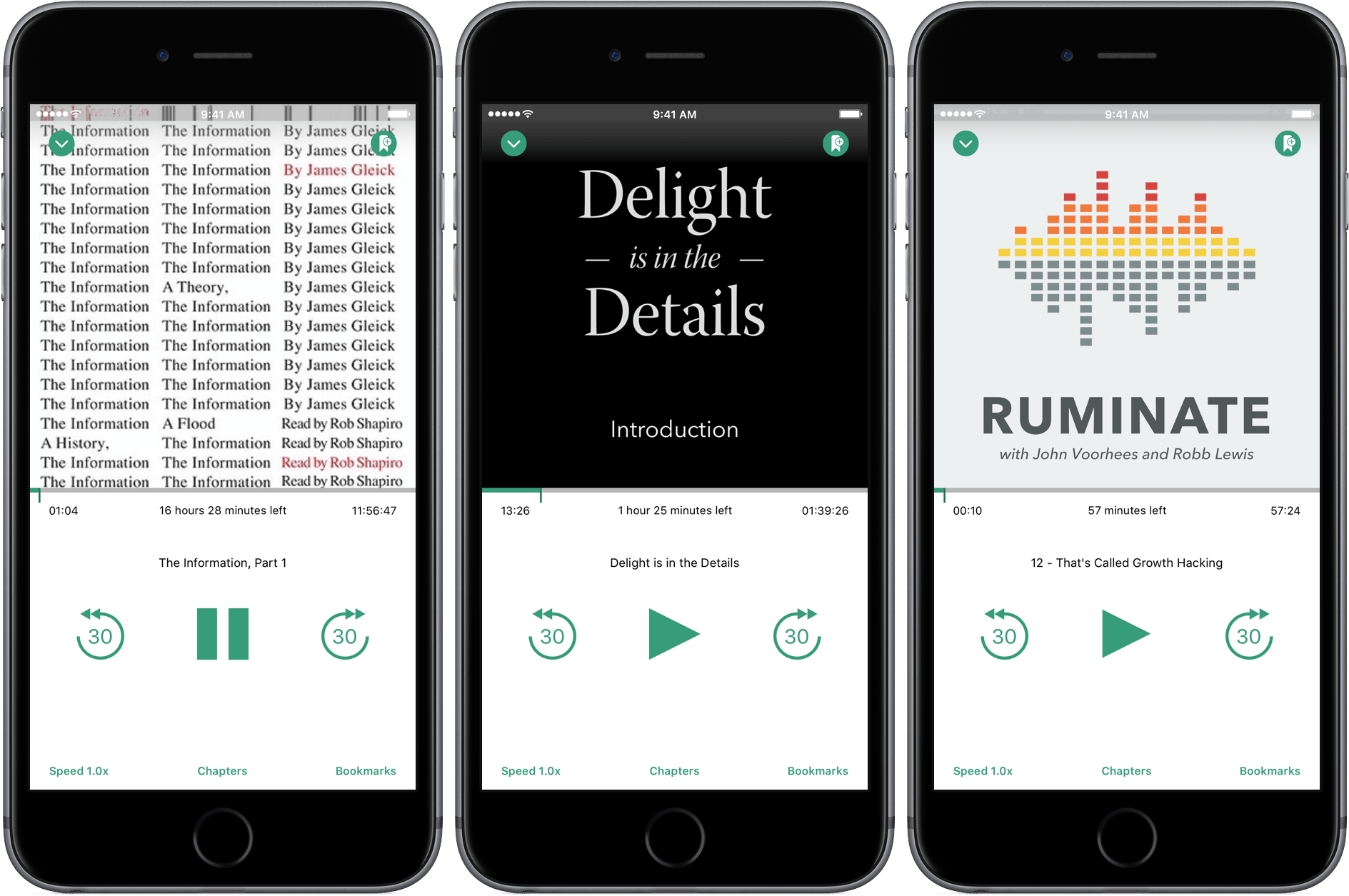 Audiobooks occupy a weird backwater on iOS. Long tucked away in Apple’s Music app behind a ‘More’ button, audiobooks were kicked out of Music with iOS 8.4 and now live alongside eBooks in iBooks. Audiobooks are also one of the most restrictive types of media you can purchase on iTunes. Once downloaded to a device, an audiobook cannot be re-downloaded. Download an audiobook to an iOS device that isn’t backed up and if your iPhone or iPad dies, your audiobook dies with it. iTunes audiobooks are, to borrow a Steve Jobs’ complaint about Blu-ray disks, “a big bag of hurt.”

iTunes is not, however, the only game in town. Services like Audible let you re-download books, and there are plenty DRM-free audiobooks available. But Audible is its own proprietary system and even DRM-free audiobooks cannot sync to iBooks on an iOS device without using a Mac and a cable. Pain points like these are what create opportunities for third party developers like Tim Bueno who has taken the pain out of getting DRM-free audiobooks onto your iPhone with a promising, although imperfect, Dropbox-connected audiobook player called Bound.

Bound starts from the premise that with the advent of cloud storage services like Dropbox, loading your audiobooks onto your iPhone shouldn’t require a Mac. Tap on the plus button in the upper righthand corner of the main screen, link your Dropbox account, and then start choosing audiobooks to download to Bound – that’s all it takes to get started. Bound supports DRM-free M4B audiobook files and MP3 audio files only; it does not support DRM-protected files like those from iTunes. In addition, Bound can only link to Dropbox, something I would like to see expanded to Box, Google Drive, and other storage providers. 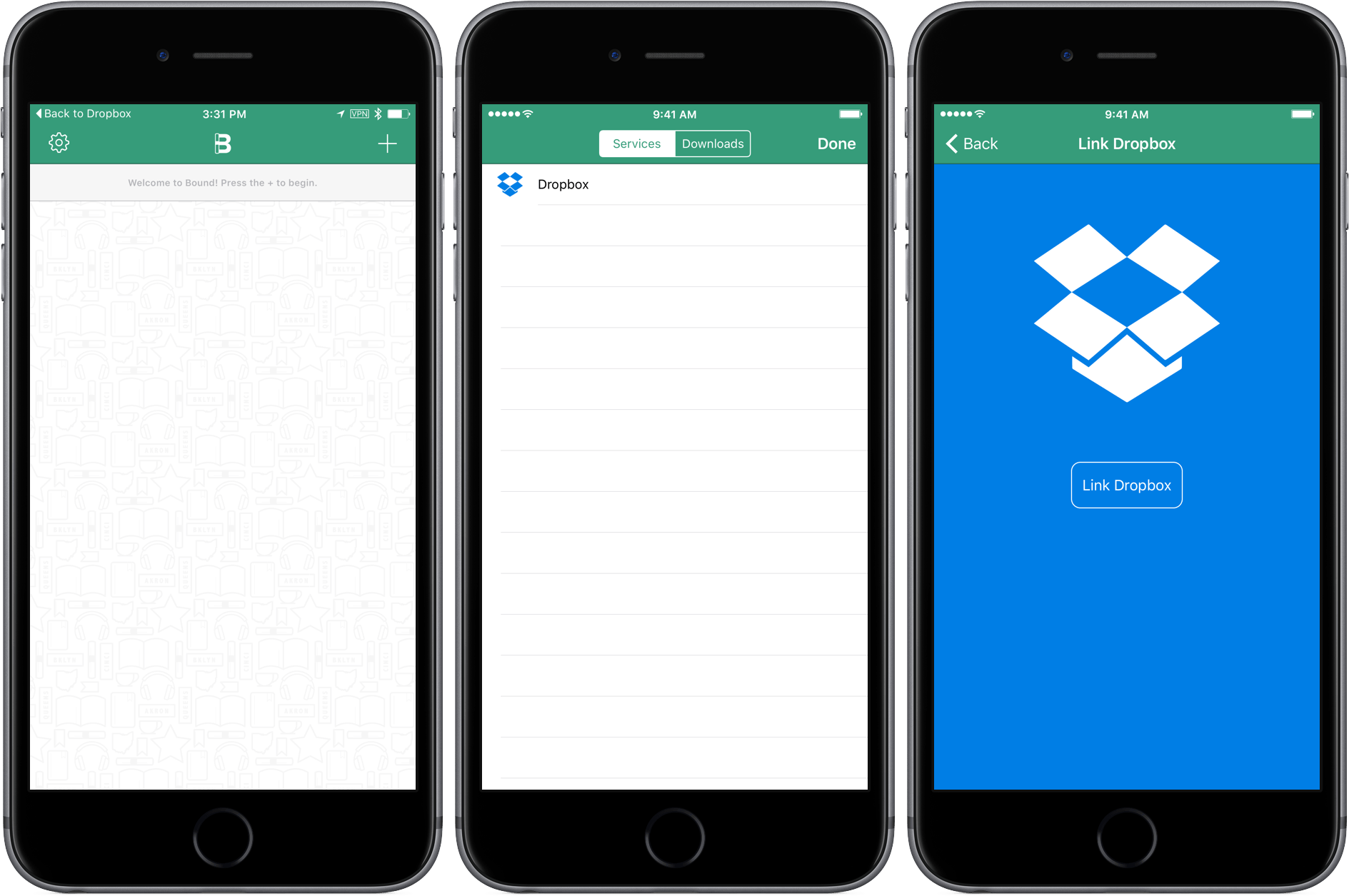 When I first opened Bound, I connected my Dropbox account and navigated to a folder containing the audiobook version of Shawn Blanc’s book Delight is in the Details. Shawn distributed two DRM-free audiobook versions of his book — a single M4B file and sixteen separate MP3 files that correspond to each section of the book, making it great for testing Bound.

I downloaded the sixteen MP3 files first. They downloaded quickly, and were grouped as one audiobook. Tapping on the info button for the book took me to Bound’s editing view, which revealed that the files were out of order because some downloaded more quickly than others. Although I would like to see automatic sorting of files based on track information, which Delight is in the Details includes, it was simple to reorder the files by using the drag handles next to each file.

Next, I downloaded the M4B file, which includes the entire audiobook as one file. Because it had the same title and author information as the MP3s, Bound added the M4B file to the MP3 version of the book that I previously downloaded. From the editing view, tapping on the new M4B file gave me the option to move the file to an existing book or to create a new book. I created a new book, added title and author information, and was all set. 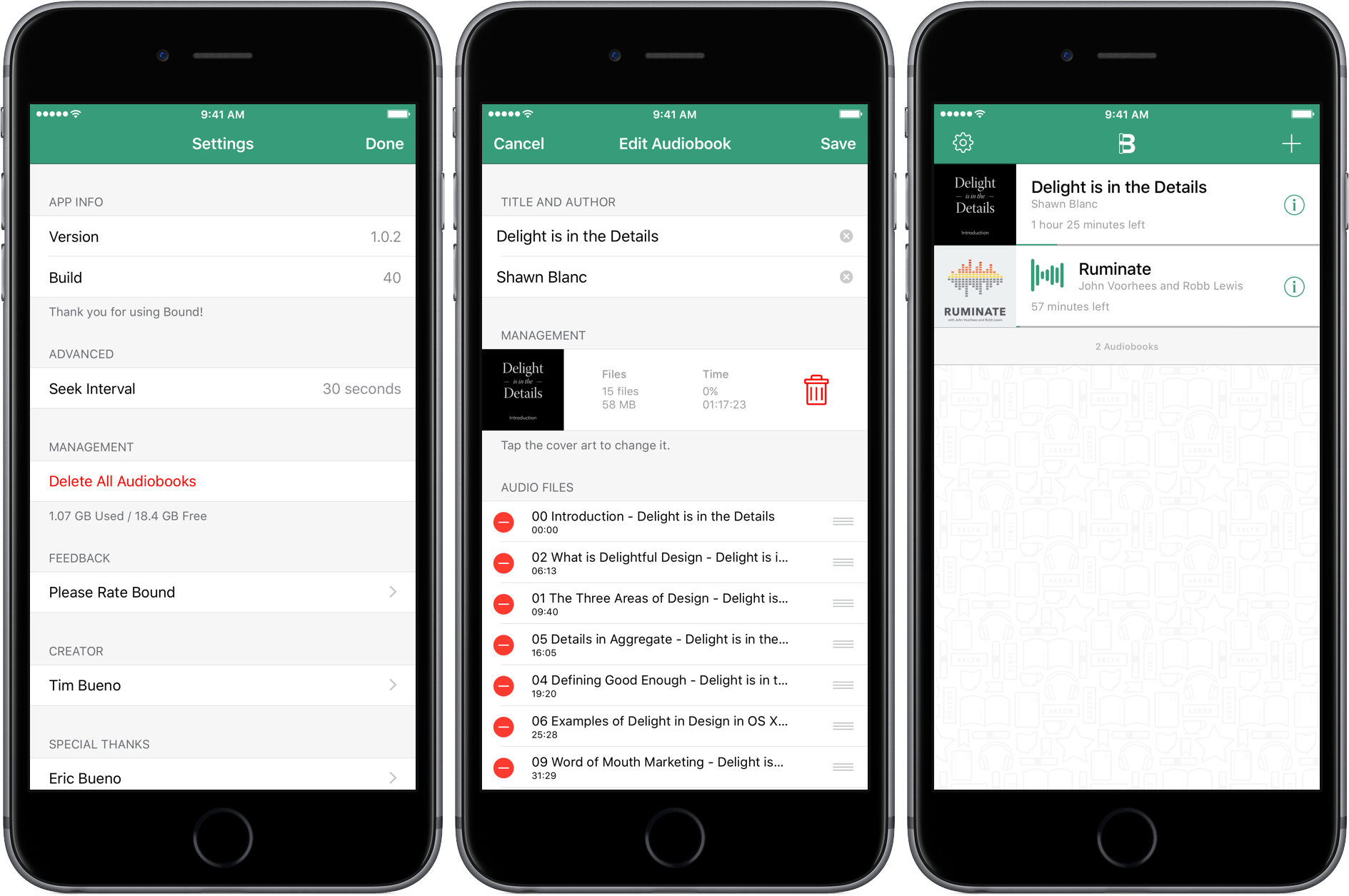 Bound has all the basic features you would expect from an audiobook player. You start a book from the list view by tapping on its entry, which opens a player reminiscent of Overcast’s. If you tap pause, Bound remembers where you left off the next time you open the app. If you swipe down from the player view, you return to the list view. The book you are listening to is identifiable in the list view by a green sound wave animation next to the book’s artwork that freezes if you pause playback. In list view, tapping on a paused book does not resume playback. Instead, it reopens the player view where you have to tap the play button. This behavior struck me as a little odd and I would prefer to see tapping a book in the list view act like a true play/pause button. When you finish a book, you can delete it by swiping right to left in the list view.

You can add bookmarks that make returning to a specific part of an audiobook a simple matter of entering the bookmark list view via the ‘Bookmarks’ button at the bottom of the player view. Unfortunately, in my tests, the bookmarks I set were not in chronological order when I went to the bookmark list view and I was unable to discern any pattern to the order of the list. You cannot edit bookmarks to add a descriptive name either.

Bound supports chapters, but not in the way you may be familiar with from podcasts. Chapters in Bound are the individual files that comprise an audiobook. Podcast chapters use ID3 chapter tags, which Bound does not support. If your book is comprised of multiple files, like the sixteen-file MP3 version of Delight is in the Details, this works fine, but not if you are listening to a podcast with chapters or a book that is just one file.

You can also adjust playback speed in Bound from 0.5x to 2.0x. I have been spoiled by Overcast’s Smart Speed feature, which this is not. Speeding the audio up works well, but it speeds up playback uniformly, which I find jarring. Slowing playback down introduces an echo effect to the audio that makes it sound like the narrator is talking from the bottom of a well.

I addition to a few books, I also imported an episode of my podcast, Ruminate. Each time Robb Lewis and I record, he leaves the edited MP3 in our shared Dropbox folder so I can listen to it before it is published. The show isn’t in the RSS feed yet, so I can’t easily listen in a podcast app. I could upload the show to Huffduffer to get it into Overcast, but I don’t want to do that for a show that hasn’t been released yet and may change. Instead, I usually end up listening to the show on my Mac. With Bound, I now have an easy way to listen to the show on the go with my iPhone and the ability to bookmark any spots I want to edit.

iBooks is not a good solution for DRM-free podcasts. Bound solves the problem of getting audiobooks out of Dropbox, which I like. I also like that there is no learning curve to using Bound. That said, Bound does suffer from the rough edges described above. I would also like to see Bound add the ability to reorder its list of books manually and based on other filter criteria, 3D Touch to resume playback from the app’s icon, an extension to send audiobooks to Bound using the iOS share sheet, and an iPad version.

Despite these rough edges and limitations, which I hope will be addressed in future versions, Bound is an app that you should check out if, like me, you have DRM-free audiobooks stored in Dropbox. However, if you need to organize a large collection of audiobooks, you may want to consider other options.