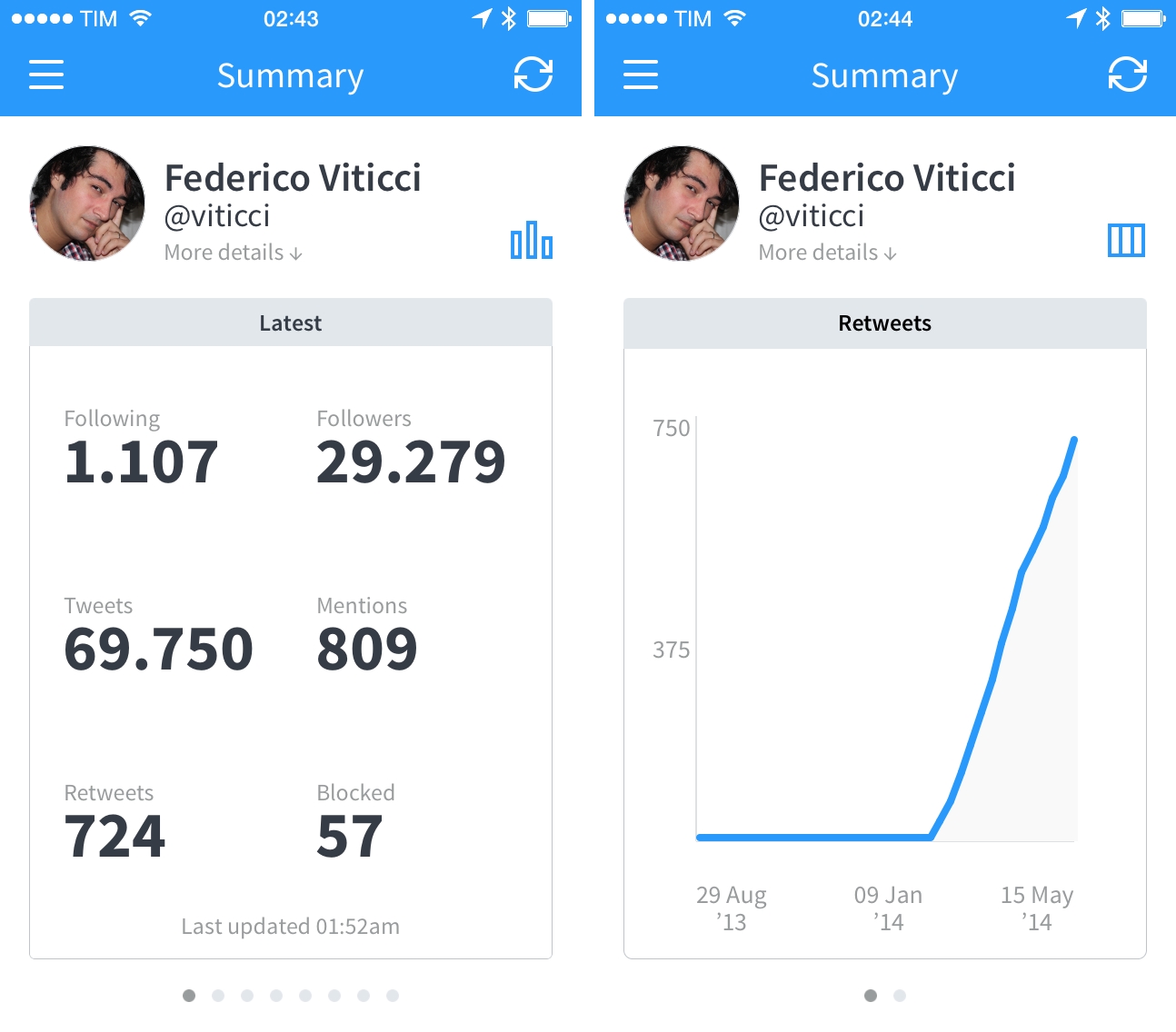 Birdbrain is one of the oldest Twitter apps I’ve been using on my iPhone, but it’s not a Twitter client in the traditional sense. Before Tweetie 2 and Tweetbot, Twitter for iPhone and Tweetbot 3, Birdbrain, originally released in July 2009, allowed me to keep an eye on my Twitter stats for follower counts, mentions, number of retweets, and more. Part ego-boosting tool and part utility to better understand why or how many people follow you, Birdbrain is back today with an iOS 7 update that brings a redesign and a couple of new features to monitor your Twitter account.

Birdbrain has been slow with updates over the years, and yet in spite of occasional issues with Twitter API changes, it was always held in high regard by its users (such as my friend Myke) who loved the app’s simplicity and wide array of displayed information. Since 2009, Twitter has introduced their own analytics product and new apps offering similar functionalities have launched, but there’s something about Birdbrain that regularly prompts someone in my Twitter stream to wish for an update or check on its developers for feature requests.

Today’s version 3.0 introduces a new iOS 7 design that’s fairly obvious and in line with other iOS 7 updates of old iPhone apps – it looks good enough. Birdbrain’s underlying concept has stayed the same: you open the app every once in a while, and it’ll aggregate stats from your Twitter account such as number of followers and people who recently followed or unfollowed you. As you keep using the app and building your personal database of Twitter stats, Birdbrain will become more useful as it’ll show you months worth of data in a handy dashboard. 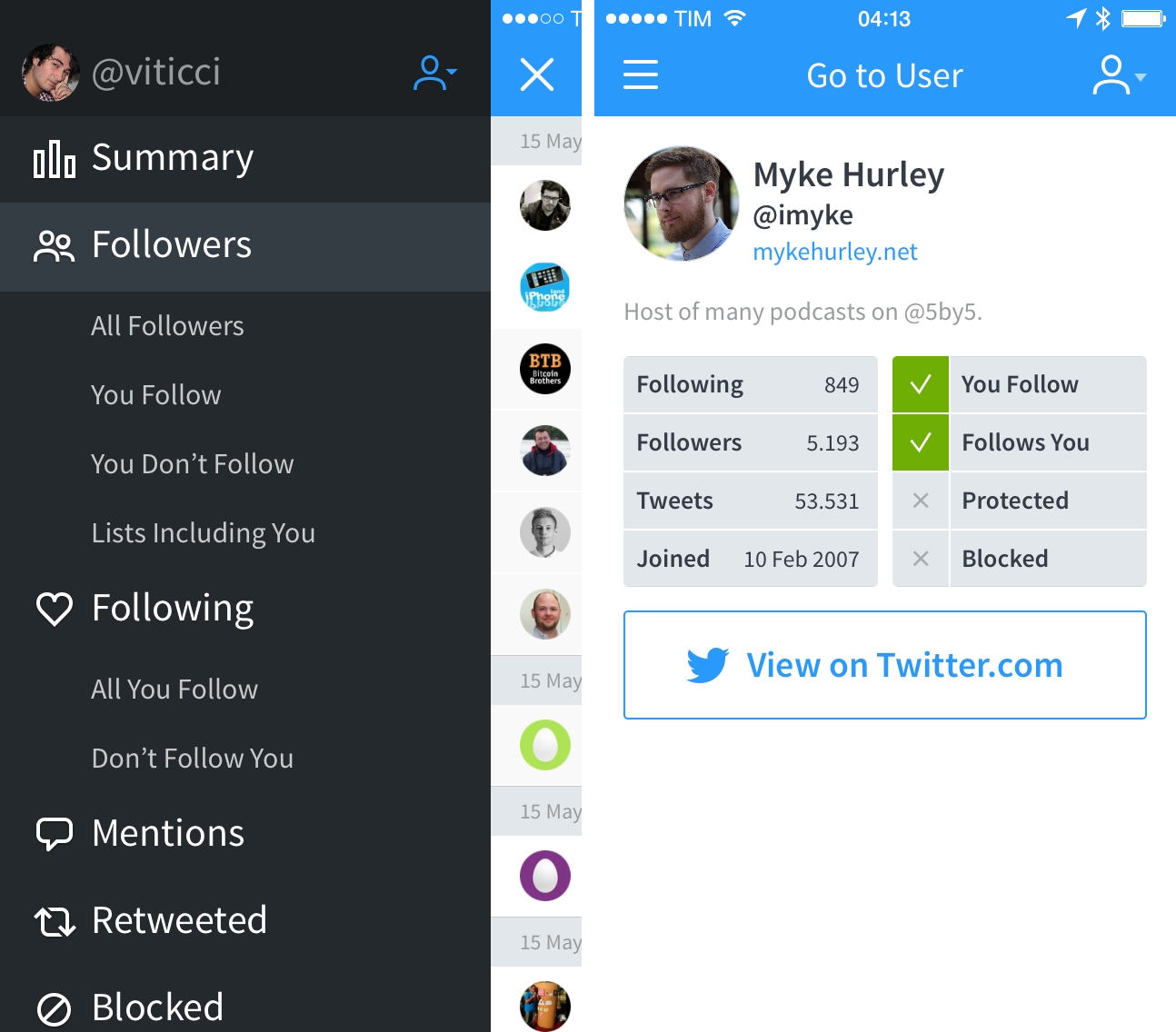 The app can track a large set of Twitter data, including the aforementioned follower counts and changes but also mentions, retweets, people you’ve blocked, people whom you follow that don’t follow you (which is sad), and, in this new version, people who follow you but that you don’t follow back (which makes you feel bad). I’ve always liked the different Twitter data tracked by Birdbrain, and the app has retained the various dashboard UIs that break down stats by day or week, up to six months in the past. I find Birdbrain useful to check on follower changes over time (not just for vanity, but for work accounts like @MacStoriesNet and @MacStoriesDeals), and now there are also graphs accompanying the app’s existing numbers and colored indicators.

Unfortunately, there are still some lingering problems and questionable choices that show the old nature of Birdbrain in some parts of the app. User profiles can be opened in Tweetbot for further viewing, which is nice, but there’s also a Twitpic option that seems a strange inclusion for the modern times. The app becomes unresponsive when scrolling large lists of usernames, and, alas, there’s still no iPad version. I would have also liked to see support for background refresh on iOS 7 to update Twitter data without launching the app manually, and a section to check on people you follow who also follow you back (for the good feels).

Birdbrain may not have the fastest release cycle on the App Store, but it remains a great Twitter monitoring tool for iPhone – my favorite one because it doesn’t try to do more than it’s supposed to and its visual presentation just makes sense. I’m glad that Birdbrain is back for iOS 7 – and even if updates will take a while in the future, I’ve learned that they eventually show up and I’m okay with that. Birdbrain is $2.99 on the App Store and a free update for existing customers.