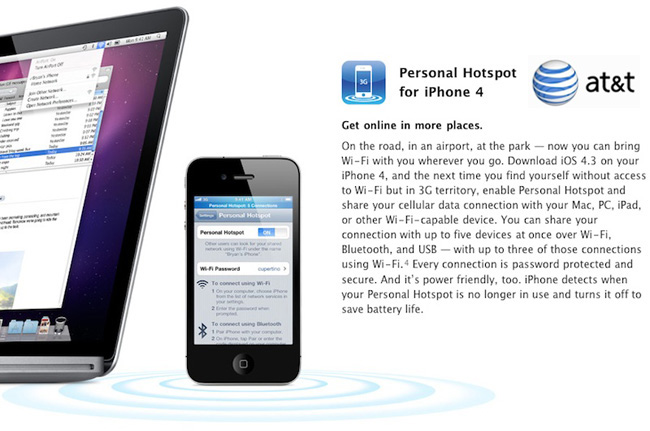 Well, we knew that when Verizon got the Hotspot feature on their iPhone 4s, AT&T’s iPhone wasn’t too far behind. With iOS 4.3 available on March 11, AT&T will also offer Apple’s Personal Hotspot feature after updating your iPhone’s OS.

AT&T will start supporting the Personal Hotspot feature in sync with the launch of iOS 4.3. Hotspot functionality will require a $25/month DataPro plan with 2 GB of data plus the $20/month add-on tethering plan that AT&T recently changed by adding an additional 2 GB of data capacity. So, you will be paying $45 a month for a 4GB of data.

At first people actually thought that AT&T may not offer this option, as it was one of the first features noticed on the Verizon iPhone, but we all knew AT&T would have to do this to stay competitive with iPhone sales.

Today, AT&T announced the launch of a new postpaid subscription data plan for tablet devices such as the iPad.

Like the prepaid plans mentioned before, this new data plan doesn’t require a contract and offers the same options of $14.99 a month for 250MB and $25 a month for 2GB. AT&T also announced that for a limited time, they are offering the first month free for customers signing up for 2GB subscription plans. Not a bad deal if you want to use your 3G iPad without feeling tied down to a contract.

These new plans cover 30-day periods and if you go over your alotted amount, AT&T will charge you an extra $10 per GB used. This isn’t a bad deal if you want to use your 3G iPad without feeling tied down to a contract.