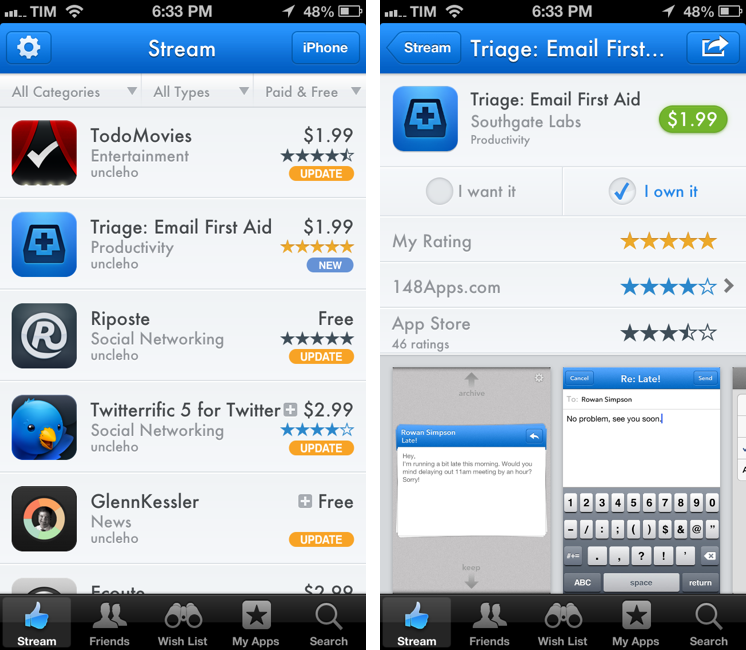 Our original AppShopper app was removed from the App Store due to a conflict with a new set of App Store rules introduced last year. Since that time we’ve been hard at work creating a new app to continue to provide useful functionality to our users and also remain in compliance with Apple’s rules. Today, we’re happy to announce that we’ve released AppShopper Social. The new version of the app still contains the core Wish List functionality that we’ve always had, but also introduces a social discovery portion to the app.

AppShopper is, by far, my favorite service when it comes to finding new apps and receiving notifications for updates and price changes. I have been beta testing AppShopper Social for the past months, and I think the new version makes a lot of sense: rather than offering a better interface for the App Store charts, the main area is now a Stream of app recommendations from people you follow. You can follow websites like AppShopper and TouchArcade, or log in with your Twitter account and find friends who are using AppShopper. When I say that App Store discovery needs more human curation, this is exactly what I mean (in addition to the work Apple itself is doing with sections and collections).

The new app resembles the old version of AppShopper, if only with a fresh coat of paint. In the Stream, you can view All/iPhone/iPad/Universal apps, filter by category, type of app, and paid/free/both. Tapping on an app in the list opens the usual single app page with “I want it/I own it” buttons (the Wish List is still there), screenshots, description, changelog & app activity, and ratings by websites with a link to their reviews. Presenting App Store ratings mixed in with reviews from writers who do this professionally is a very welcome addition in my opinion.

There are some things in the new AppShopper that could be improved: the process of adding friends from Twitter could be further developed with a screen showing how many Twitter friends are also using the app, and, currently, it’s not possible to view a user’s complete profile to show all the apps he/she is recommending to others. I like the refreshed design of the app pages, but I’d like to see a list of friends who have recommended the app in there as well. And, of course, the app isn’t Universal yet and essential features like What’s New haven’t still been enabled as the AppShopper team is figuring out how to get them past Apple’s review process. Fortunately, the team also says they’re working hard on improving the app, and I’m looking forward to the next updates.

The App Store doesn’t come with any social features (besides sharing) or connections to reviews from trusted sources, and I believe AppShopper Social fills an important gap in terms of app discovery and recommendations.