All of us at MacStories love AppShopper.com, I use it every day, along with MacAppDeals.com, to help grab the best deals for our #MacStoriesDeals posts. Although it’s not been officially announced, I noticed this evening that there have been a few exciting changes for us app hunters. First, there is a new set of buttons on the far left, “iOS / Mac”. You guessed it, AppShopper is now listing Mac App Store apps into their stream! Also, they have slightly changed their OS category descriptions. They now separate into “Mac OS, and iOS iPhone, iOS iPad or iOS Universal.” Subtle but greatly improved. 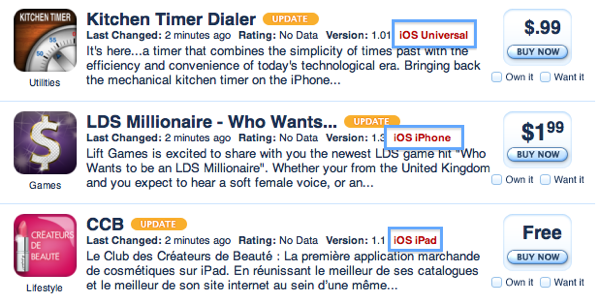 Now, I couldn’t find a way (not yet) to combine the two feeds, so it’s either iOS or Mac, not both. Either way, this is the first site that we know of that is feeding Mac App Store apps into their app feed. AppShopper is also, in our opinion, one of the best places to go if you’re looking for fresh deals (besides our very own #MacStoriesDeals posts and Mac App Deals!).

We can only hope that they are currently updating their iOS app to reflect these changes.

Note: If you don’t yet see the new buttons, be sure to empty your browser’s cache.