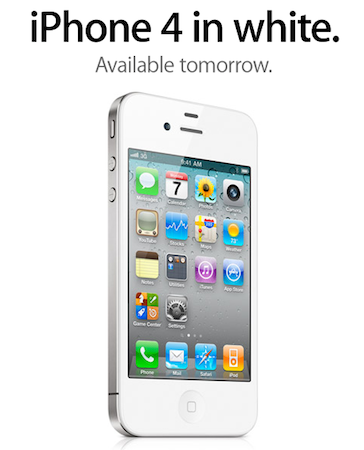 Following this morning’s official white iPhone 4 announcement after a 10-month delay since the original unveiling at the WWDC 2010, Steve Jobs and Phil Schiller told in an interview to Mobilized’s Ina Fried that the white iPhone was really “challenging” to make because of “unexpected interactions” of the white color with several internal components. Although Jobs and Schiller didn’t go into the production details in the interview, it was rumored in the past that Apple was forced to delay the release of the white iPhone multiple times because of light leaking issues, washed out photographs, and other front-panel related technical problems. The white iPhone, coming out tomorrow, indeed sports a different proximity sensor than the one found on the black iPhone 4.

It was challenging,” Apple senior vice president Phil Schiller said during a joint interview with CEO Steve Jobs on Wednesday. “It’s not as simple as making something white. There’s a lot more that goes into both the material science of it–how it holds up over time… but also in how it all works with the sensors.

We thought we were there a year ago, or less than that, when we launched the iPhone 4 and we weren’t,” Schiller said. By waiting, he said that the company was able to deliver a product that will live up to expectations.

Jobs noted that the work that Apple had to do to get the white iPhone ready has benefited the company more broadly.

The white iPhone 4 goes on sale tomorrow in 28 countries at the same price of the black iPhone 4. In the United States, it will be available on both AT&T and Verizon Wireless. Lines are already starting to form around the globe, send us photos and videos if you plan to drive to the Apple Store to get a new, final, white iPhone 4.