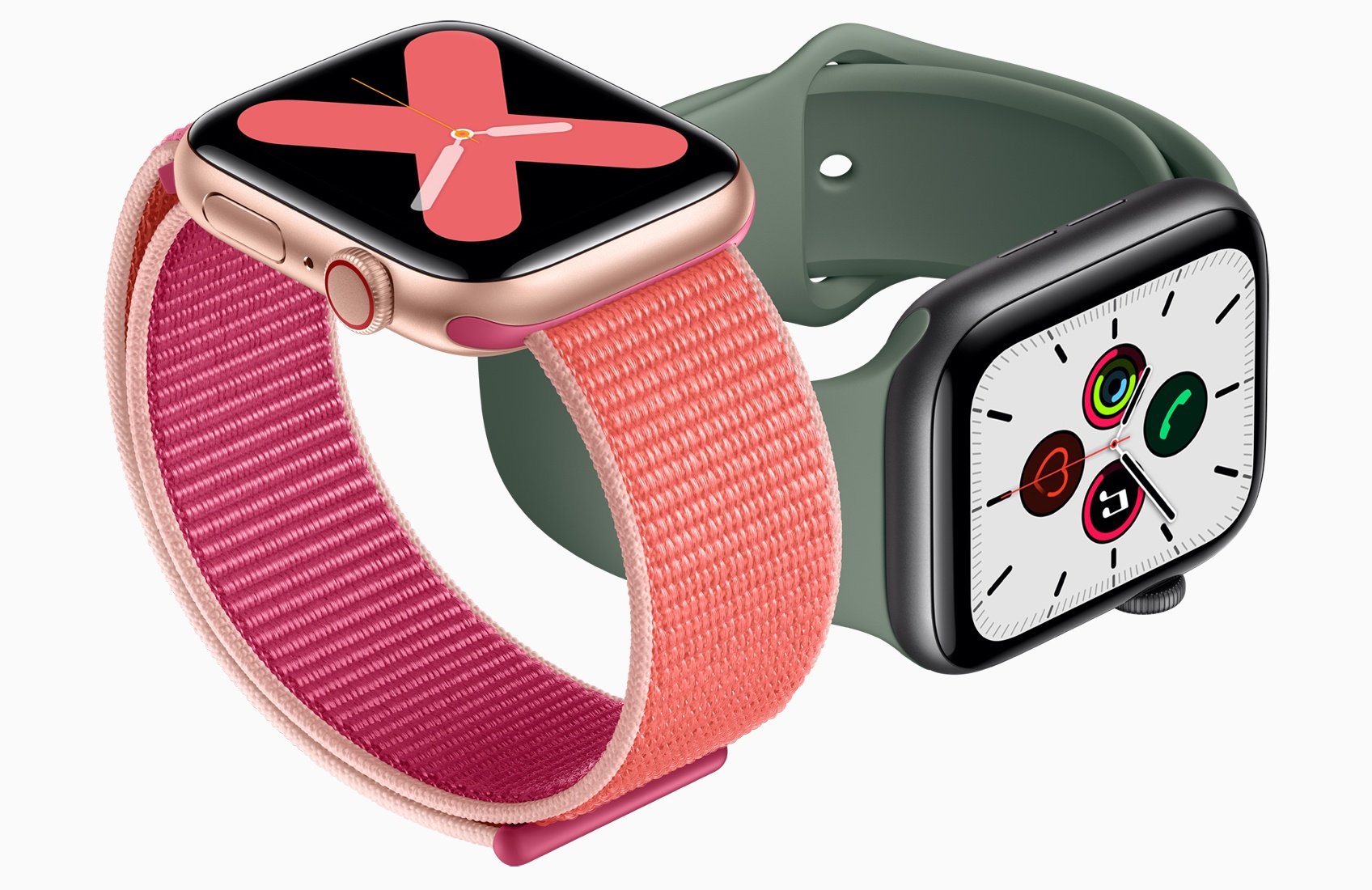 This morning at Apple’s special event at the Steve Jobs theater in Cupertino, Stan Ng took the stage to announce the Apple Watch Series 5. The new device features an always-on display for the first time ever, the same 18-hour battery life that every Apple Watch has had, and a built-in compass. The Series 5 is also the first Apple Watch to be available in titanium (alongside the standard aluminum, stainless steel, and ceramic). 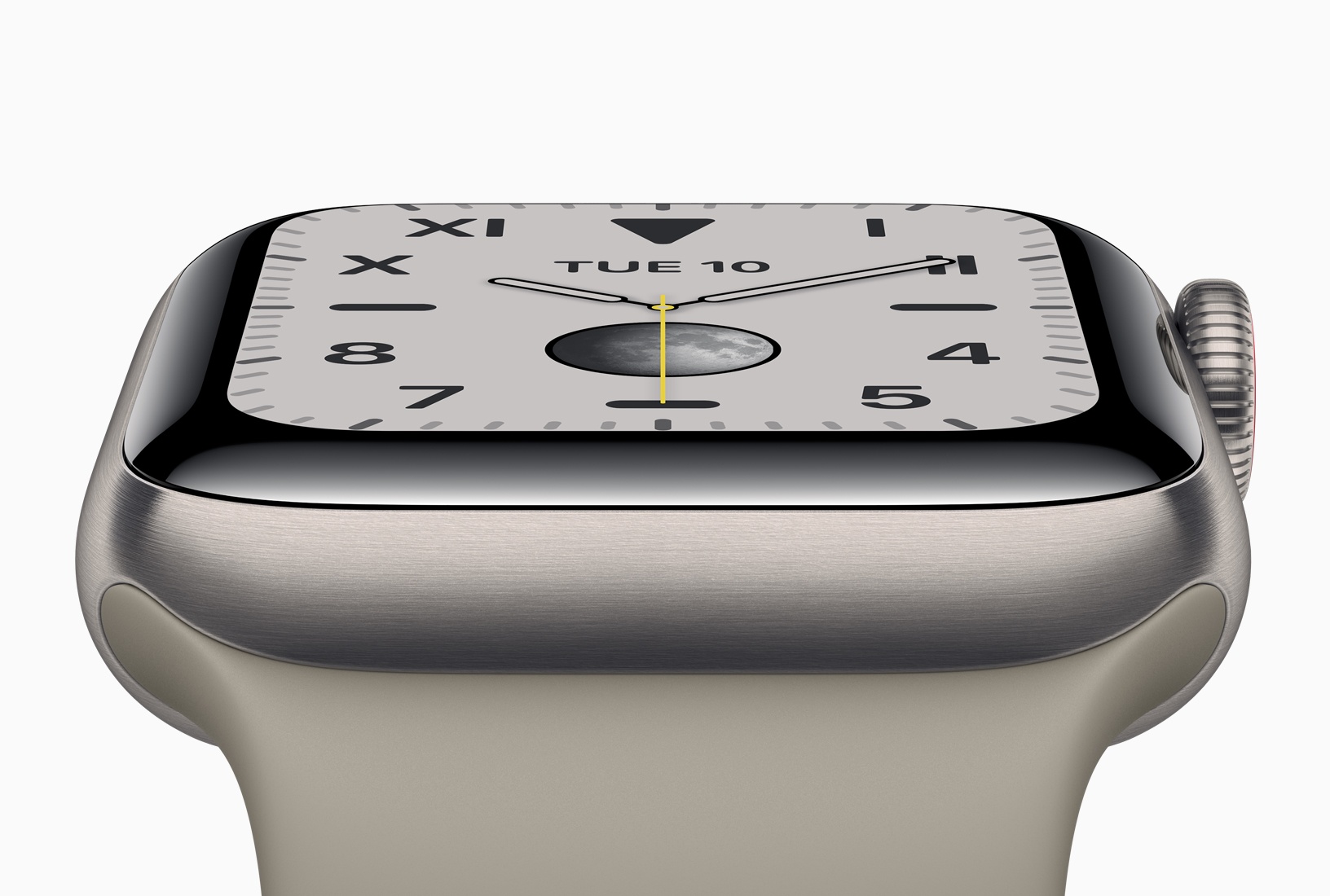 A display that never turns off is a truly game-changing feature for the Apple Watch. Detection of wrist orientation has always been decent on the device, but even when it worked perfectly there was always a delay before you could actually get the information you were looking for. To not have to turn your wrist at all to see data is far, far better.

The technology behind this advancement is an all new low-temperature polysilicone and oxide (LTPO) display, an extremely low power display driver, an integrated circuit for efficient power management, and an ambient light sensor. Together these enable the screen’s power usage to shift from a max of 60Hz all the way down to a minuscule 1Hz. This power management enables a continuation of the Apple Watch’s classic 18-hour battery life despite the screen never turning fully off.

In order to keep the power as low as possible, the Apple Watch will dim the brightness and transition watch faces to black versions whenever the screen is in its low power state. Most of the watch faces that Apple provides either are already on black backgrounds, or have alternate styles with black backgrounds. For instance, the new California Dial face has a default navy blue face plate, but another option for that face uses a black face plate. On the Series 5, even if you have your watch set to use the blue California Dial face, when the screen is in its “inactive” mode it will switch over to the black face.

The watch’s OLED screen is able to completely turn off pixels that would otherwise need to display black, so the screen saves big on power usage when most of the background is black. This sounds great for faces that support it, but I’m curious how the Series 5 will deal with options like the Photos or Kaleidoscope faces. We’ll have to wait to get our hands on these devices in order to explore how they handle the numerous watch face possibilities. 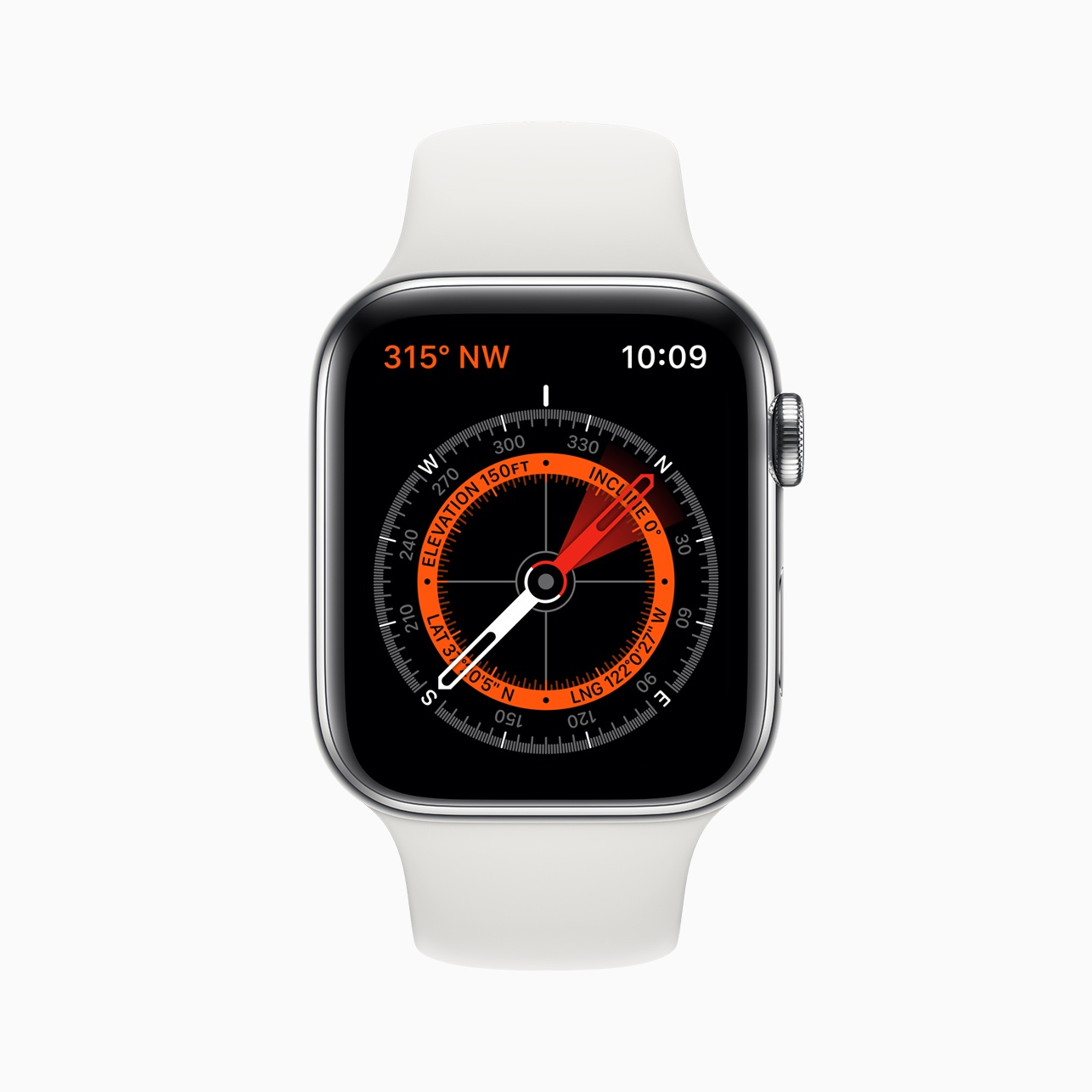 Continuing the trend of new Apple Watch models adding some kind of new sensor component, the Series 5 debuts a compass. A new first-party Compass app will reveal the sensor’s raw data for users to get their directional bearings, and can even be added as a complication on certain watch faces. The Compass app will also include latitude, longitude, elevation, and incline metrics. The watchOS Maps app has been updated as well, and now will use the compass to show the direction you’re currently facing as you move around. 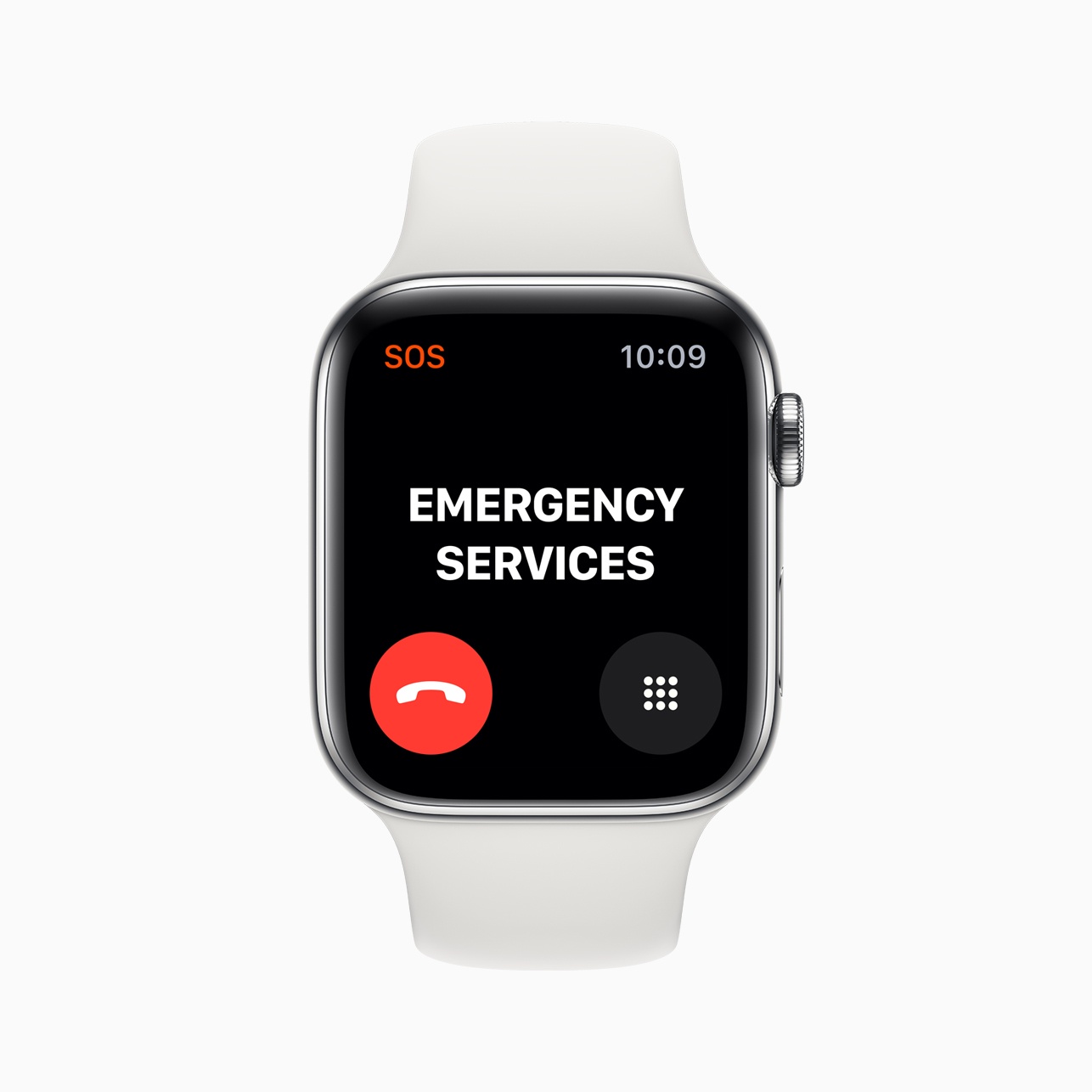 For a couple generations the Apple Watch has supported using its cellular radio to make a call to emergency services if you hold down the side button on the device. On the Series 5 cellular Apple Watch this feature is now enabled for international calling as well. This means that if your Watch is on a cellular plan and you’re out of the country, you can still use the side button shortcut to call for help in an emergency.

The Series 5 uses the same case design that was introduced with last year’s Series 4, but it’s now available in titanium. You can choose from silver or space black titanium, with both colors priced at $799 for 40mm and $849 for 44mm. A white ceramic model is available again this year for $1,299 (40mm) and $1349 (44mm). Stainless steel returns in silver, space black, and gold finishes. All stainless steel finishes cost $699 for 40mm and $749 for 44mm. All of these models come only with cellular radios included, so there are no cheaper options if you want these materials but aren’t planning on setting up your watch with a cell plan.

The aluminum Apple Watches round out the line at $399 for 40mm and $429 for 44mm. Cellular capabilities can be added to either model for an extra $100. Aluminum watches come in silver, space gray, and gold colors.

For the first time this year, Apple’s website includes a new “Apple Watch Studio” feature which allows you to pair any case with any watch band. In previous years only certain bands were available with certain cases, and if you wanted a combination that was not available you had to buy an extra band separately. With Apple Watch Studio, whichever band you choose will be $50 cheaper than it would be if you purchased it on its own.

The Apple Watch Series 3 continues to be available for purchase at the low end of the line for just $199. It can only be purchased in silver or space black aluminum, and only with a corresponding white or black (or black Nike) sports band. Last year’s Apple Watch Series 4 has been dropped from the lineup and is no longer available direct from Apple. 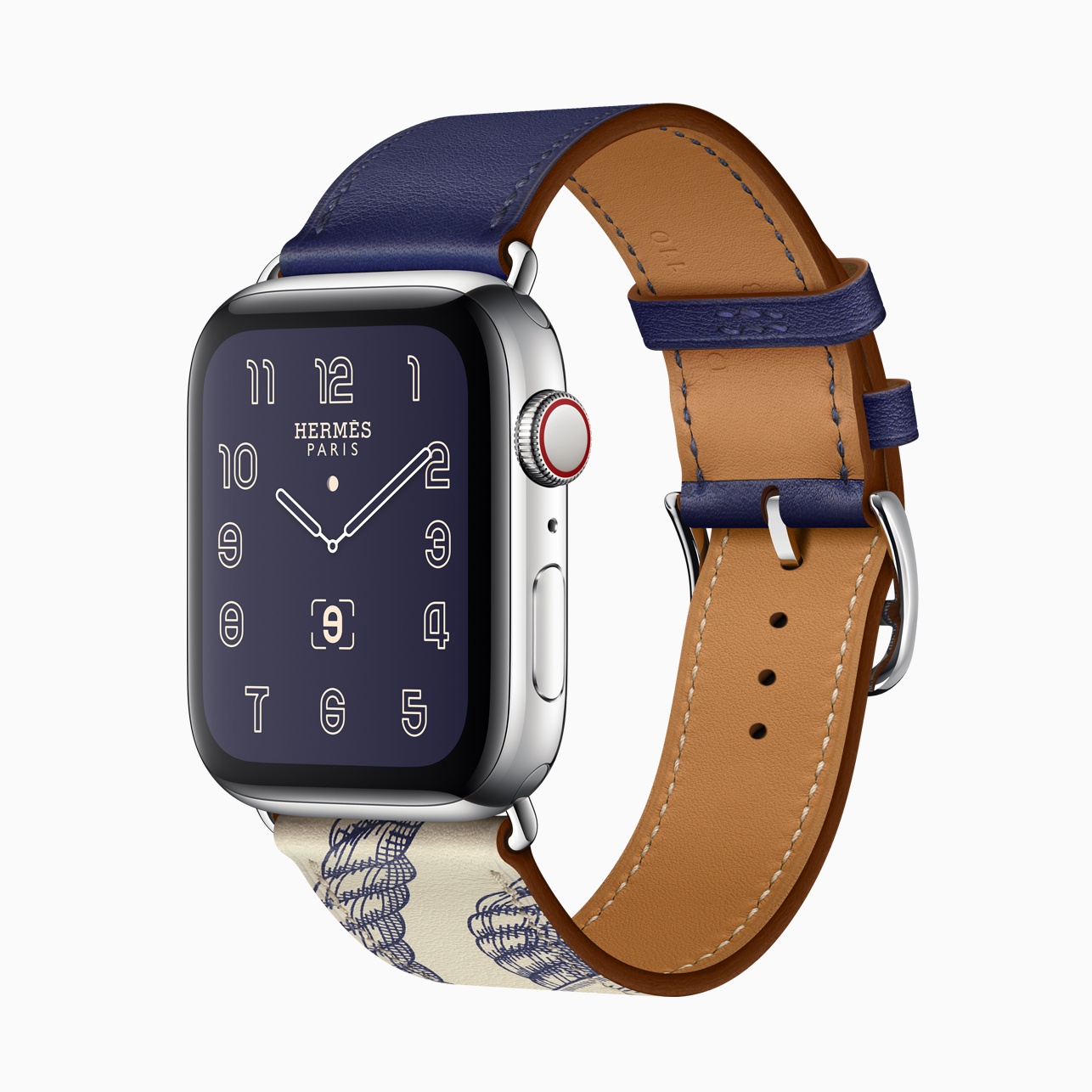 The Series 5 watch uses the same band connectors as previous models, so any existing Apple Watch bands that you’ve purchased will still work with the new device. As usual though, Apple has also released a host of new watch band colors for the fall. I won’t list every color here, but go check out Apple’s watch band page if you’re thinking about picking up a new band.

On stage Apple specifically called out their collection of new Hermés and Nike branded bands. If you buy one of these as the included band with your Apple Watch, you’ll also get access to a handful of new Hermés or Nike watch faces. 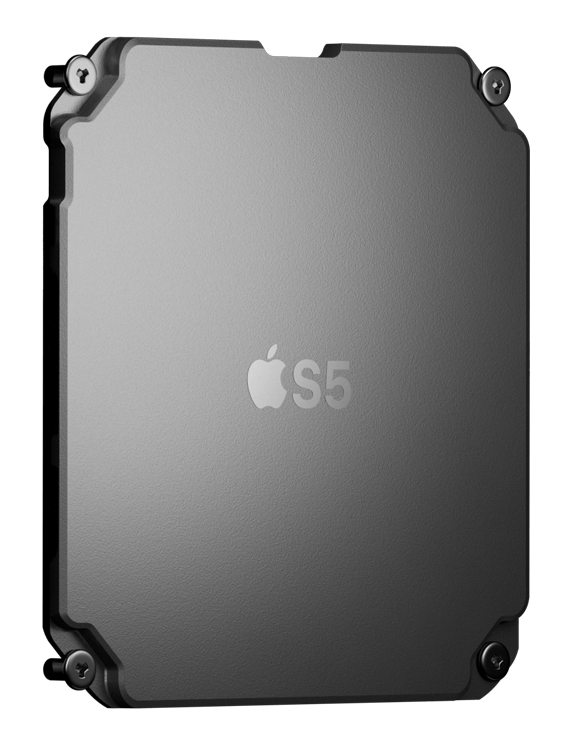 The Series 5 Apple Watch includes a new S5 processor, but Apple didn’t touch on what changes it brings either on stage or in its press materials. I assume this means that the S5 doesn’t include significant performance improvements, as Apple usually calls those kind of changes out. Most likely the S5 is dealing with the complicated power management calculations required to keep the screen on while drawing as little power as possible at any given moment.

The new aluminum Apple Watches are the first Apple Watches to be made from 100% recycled aluminum. They join today’s new iPhone 11 and 7th generation iPad, as well as last year’s retina MacBook Air in achieving this milestone.

The Apple Watch try-on experience at Apple retail stores has been upgraded. Stores should now have every combination of watch case and band, and you’ll be able to mix and match bands and cases until you find one you like. Previously most stores had a subset of bands and cases for try-on, but not necessarily all of them.

The count of new features in the Series 5 Apple Watch is a little smaller than most years, but if nothing about the device had changed other than the new display then it would still have been enough. It’s difficult to overstate how much of an impact on the Apple Watch experience an always-on display will have. This is undoubtedly a killer feature for the device, and if you’re on any model of Apple Watch earlier than the Series 4 then the Series 5 is easily worth the upgrade. If you are running a Series 4 then you’ll have a tougher decision to make if you’re thinking about buying a new watch. Most of the internals in the Series 5 are the same as last year, and the Series 4 continues to be an incredibly capable device on its own merit.

The Series 5’s screen advancements mark a turning point in the history of the Apple Watch. A compass is a nice addition, and titanium may tempt you, but this year is all about the display. I don’t think we’ll see another feature this big on the Apple Watch for years to come.

You can preorder the Apple Watch Series 5 today, and it will begin shipping on September 20th.