The new MacBook Air maintains its classic tapered aluminum design, but now includes two Thunderbolt 3 ports along the left edge and a headphone jack on the right. All other ports have been eliminated, as expected in Apple’s modern MacBook port strategy.

The old scissor switch keyboard has of course been replaced by Apple’s third-generation butterfly switch variant, and the hinged trackpad has been retired in favor of a 20% larger Force Touch trackpad. A redesigned speaker system delivers 25% more volume, double the base, and wide stereo output. A new three-mic array makes audio input clearer for FaceTime calls and Siri commands. 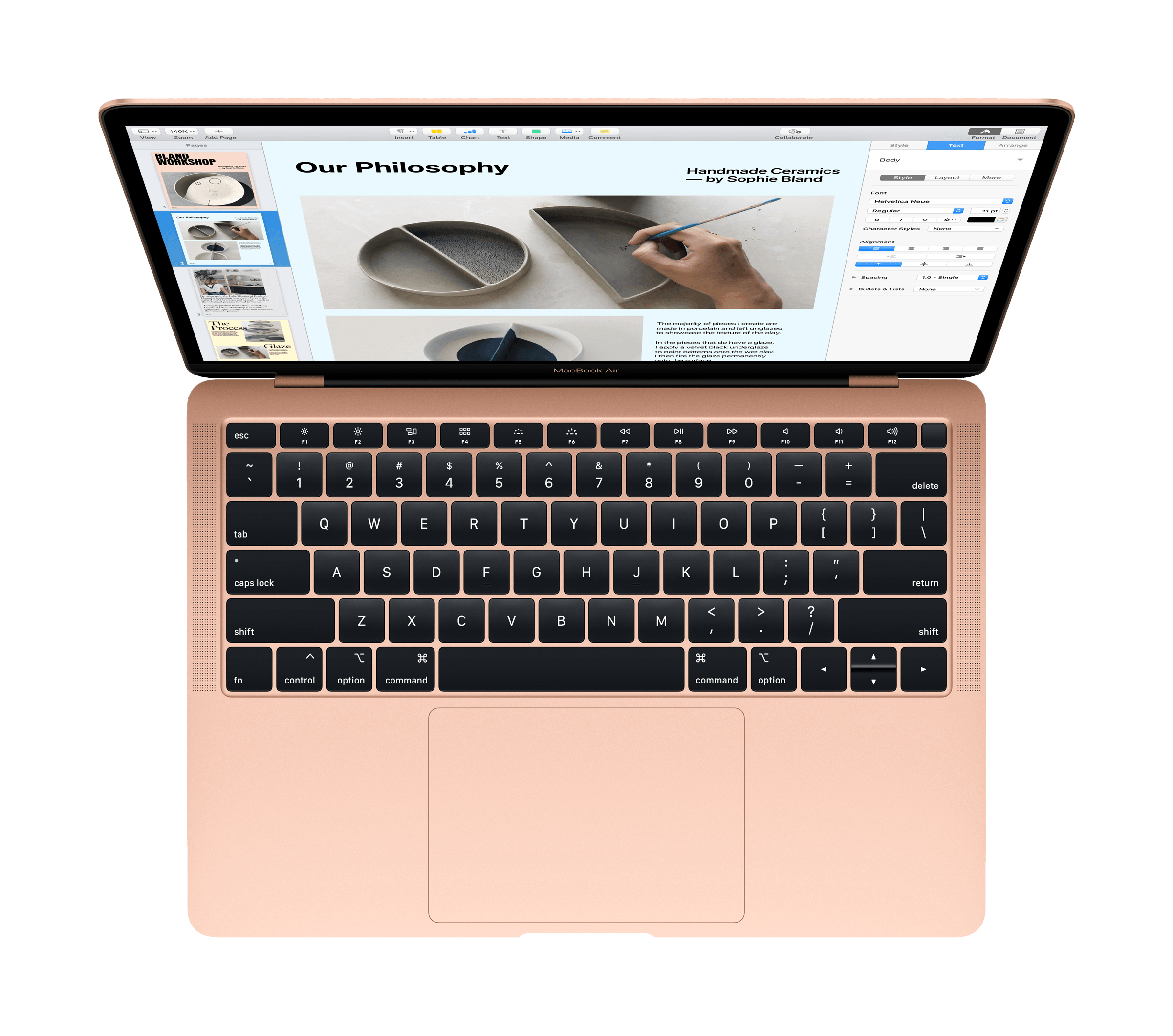 The MacBook Air’s Retina display is 13.3 inches on the diagonal, and packs in over 4 million pixels. It also features 48% more color than the previous generation. The aluminum bezels around the old Air display have been replaced by the black glass common in other modern MacBooks, and the size of those bezels has been reduced by half.

The new enclosure measures only 0.61 inches thick at its thickest point, making it 10% thinner than the previous MacBook Air. Reducing the bezels also served to make the entire body smaller, resulting in a machine with 17% less volume than its predecessor. Weighing in at 2.75 pounds, it’s also a quarter pound lighter.

Apple has designed a custom aluminum alloy which is being used for the first time in the new MacBook Air. According to Apple, this new alloy is just as strong and durable, but can be created using 100% recycled aluminum. The result is that the new MacBook Air has a 50% smaller carbon footprint, making it the greenest Mac Apple has ever made.

Finally, the new Air comes in three familiar colors: space gray, gold, and silver. These are well known from other Apple products, but this is the first time color options have made their way to the MacBook Air.

While the new keyboard does not include a Touch Bar, the power button in the top right corner has been replaced by a Touch ID sensor. This sensor is powered by an Apple T2 chip, which features the familiar secure enclave for securely storing and authenticating fingerprint data. The T2 also controls the machine’s SSD storage, enabling fast data encryption for everything stored on the drive, and a secure boot process. According to Apple, the new MacBook Air offers the most secure storage of any Mac notebook today. Finally, the T2 enables the new Air to have an always-on process listening for “Hey Siri” commands.

The new Air features a 1.6GHz dual-core 8th-generation Intel Core i5 processor with Turbo Boost up to 3.6GHz. The starting model includes 8GB of RAM, but for the first time in a MacBook Air this can be upgraded to 16GB. All models ship with SSD storage, starting at 128GB and going all the way up to 1.5TB. The new machine sports a 12 hour battery life for web browsing, and 13 hours for watching video. 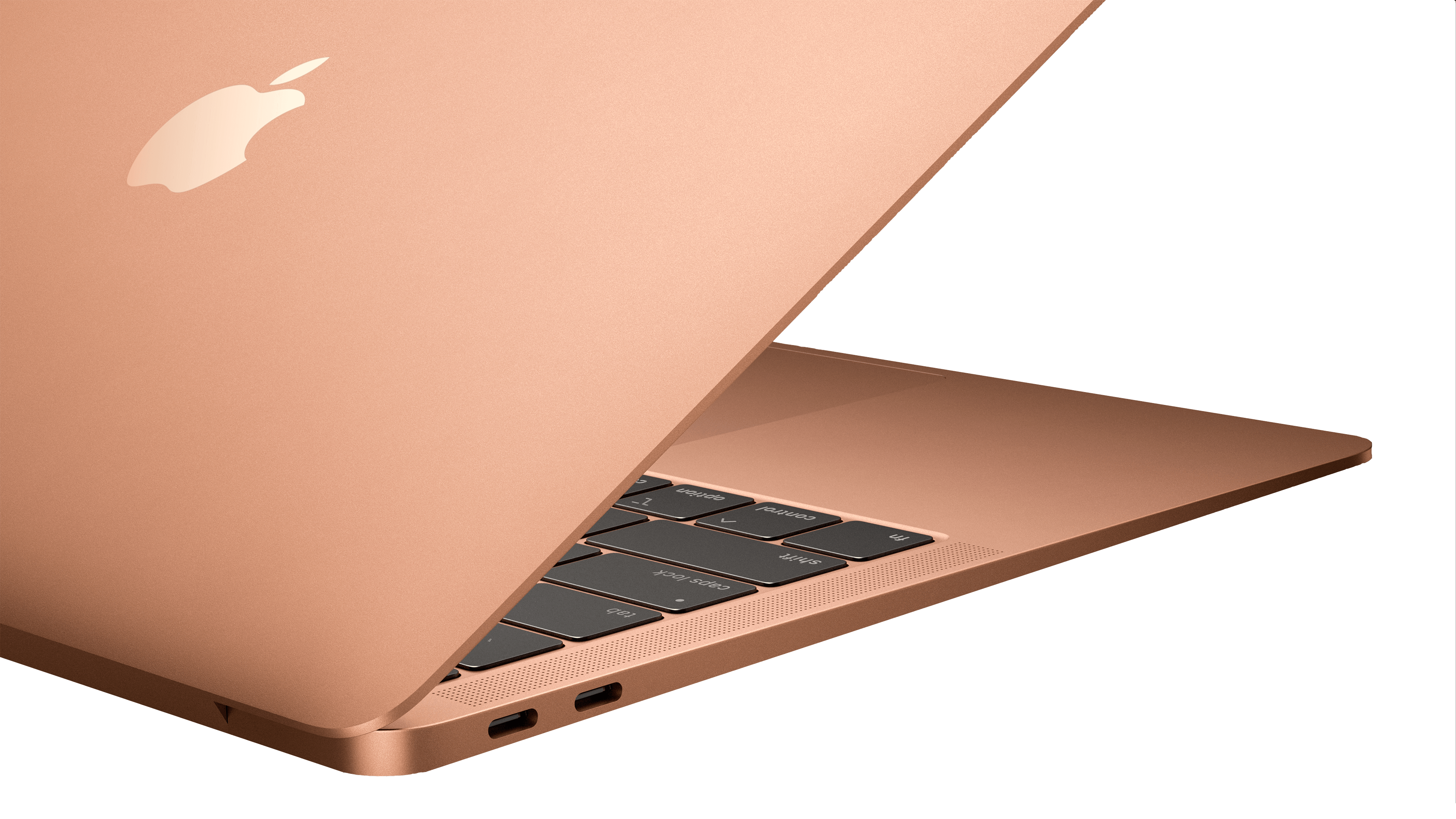 The new MacBook Air is a fantastic update to Apple’s aging Air line. We’ve been rapidly nearing (or arguably already past) the point where these old computers either needed to be updated or removed from the lineup entirely. The expectation has been that the more modern standard MacBook line would eventually replace the Air, but years later Apple still has not been able to get the MacBook price low enough or specs impressive enough for that to occur.

After today’s event, the future of the standard MacBook looks shakier than that of the Air. Apple has finally decided to deliver exactly what everyone has been asking for: a MacBook Air with a Retina display and modern internals. This machine has extremely few compromises for a non-pro laptop, and a starting price that is $100 cheaper than the MacBook. There’s little doubt in my mind that this MacBook Air will be Apple’s new best selling model, taking over from its outdated predecessor which never lost that crown.

The new MacBook Air starts at $1,199, and is available to order today on Apple’s website. It will make its debut in Apple retail stores starting on November 7. The old 13-inch MacBook Air remains on sale as well, holding down the Mac notebook starting price at $999.