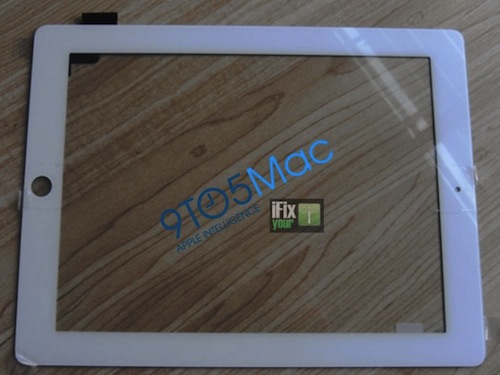 9to5mac reports they got their hands on another iPad 2 digitizer coming from Shenzhen, this time in white:

The piece that we have (from Shenzhen City), thanks to the folks at the iFixYouri iPhone repair shop, is the “digitizer” sometimes known as the the thick bezel.

If you look closely at the back of the part, below, you will see the camera hole, which happens to fit perfectly with the iPad 2 screen protectors from our friends in Asia.

The leaked white part comes as a surprise as Apple has notably had issues with the release of the white iPhone 4, first announced at the WWDC last year and then delayed multiple times due to manufacturing problems with the white color. A recent rumor suggested Apple fixed the problem with a new Japanese paint – could it be the same of this white iPad 2?

The next-generation iPad is expected to be announced on Wednesday. Here’s a roundup of all the rumors and speculation we’ve heard so far.