Apple didn’t openly celebrate the tenth anniversary of its retail stores except for using the occasion to role out iPads as an interactive “smart sign”. However it has been noticed that in the back-end of stores, Apple has sent a tenth anniversary poster. The poster is almost philosophical in its review of the past ten years of Apple stores, highlighting the successes, failures, trivial facts and lessons learnt.

Jump the break for a recreated version of the poster, or head to ifoAppleStore for a transcribed copy of the poster. Otherwise, here are some highlights that we thought were interesting:

We’ve learned that a 32’6” transparent glass box can stand tall even among the giants of the Manhattan skyline.That when glass becomes as iconic as the Fifth Avenue Cube, it can also become the fifth most photographed landmark in New York City.

We’ve also learned that getting these details perfect can feel like trying to move a mountain. Sometimes two. But in the end, the effort is worth it. Because steel, glass, and stone can combine to create truly unique and inspiring spaces.

We’ve learned that a visit to the Genius Bar can fix more than just computers. It can also restore a customer’s relationship with Apple

We’ve found that when we wear black T-shirts, we blend in. And when we wear too many colors it’s confusing. But blue shirts are just right. We’ve also learned that it takes precisely 4,253 stitches to embroider the Apple logo on those blue shirts. And we even figured out which direction the stitches should go in.

As beautiful and iconic as our stores may be, the people who create and staff those stores are what matters most. So on this 3,652nd day we say think you to very single one of you. We say thank you to thosewho were there on the first day, to those whose first day is today. 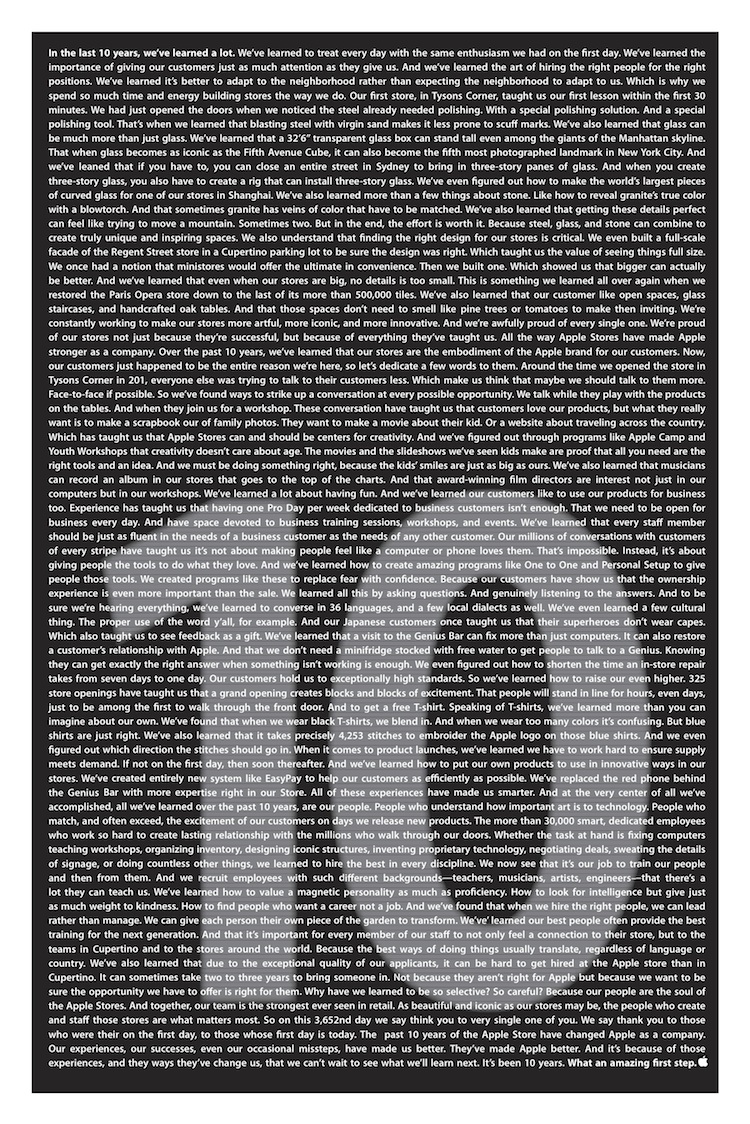