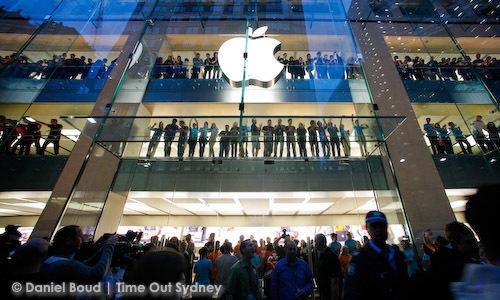 Apple today revealed to an Australian site, Current, that it has seen over 1 billion customers through its retail doors since it opened the first Apple Store in Washington just over ten years ago in May of 2001. Current got the information from Apple after they had contacted them to confirm the opening of the eleventh Apple Store in Australia, which is set to open this Saturday in Penrith, New South Wales.

Apple Retail has been in business for 10 years. During this period, we have had over 1 billion visitors through our doors, many of whom are new to the Mac, as the Apple Store is the best place to learn about all the latest products from Apple.

Apple also revealed that by the end of Apple’s financial year (ending September 25th) they plan to have 363 Apple Stores open, worldwide. Given that Apple currently has 330 stores open that means Apple is planning to open another 33 stores in just over two months – effectively that is a new store roughly every three days averaged out.

Our retail offering continues to grow, with Penrith the 11th store in Australia, since we opened Apple Store Sydney just three years ago. Globally we are planning to have 363 stores in fiscal 2011.

Current also asked Apple representatives what made their retail stores so popular and got a response that referenced service as being the “hallmark of every Apple Store”. In particular they pointed towards the fact that the response from customers has been “overwhelming” with 1 million customers taking an advantage of the Personal Setup offering in the last quarter alone.

[Current via The Next Web]