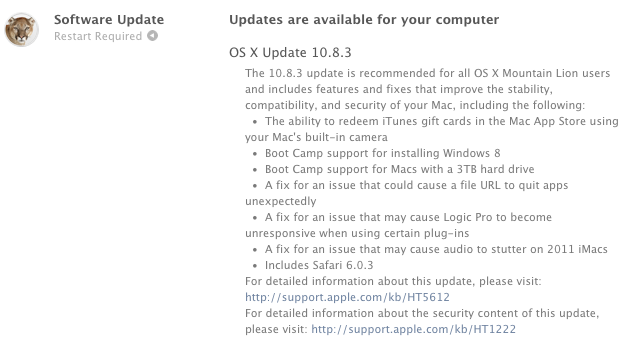 After nearly four months in testing and thirteen betas seeded to developers, Apple has today released OS X Mountain Lion 10.8.3. As with previous software updates, the new version is available on both the Mac App Store and Apple’s website.

10.8.3 includes some new features and bug fixes. Notably, the update comes with the usual stability improvements, but, this time, also a fix for the notorious File:/// URL bug that could crash certain Mac apps. Safari 6.0.3 is also part of the update, with improvements for scrolling on Facebook.com, fixes for zoom, restoring position, and bookmarks issues that could cause bookmarks to be duplicated on iOS devices.

As far as new features go, Boot Camp now comes with support for Windows 8 and Macs with a 3 TB hard drive. Introduced in late November 2012 with iTunes 11, Mac App Store gift cards can now be redeemed using a computer’s camera.

Detailed release notes can be found here. The software can be downloaded with the links below: