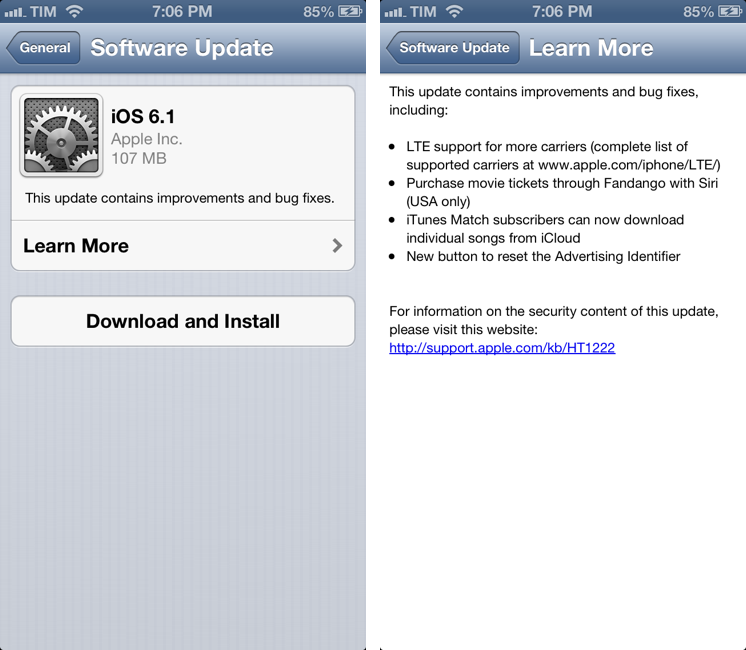 Apple has just released iOS 6.1. The software update, available in beta for the past few months, is available at the moment as over-the-air download. It should be available in iTunes soon.

iOS 6.1 brings LTE support for more carriers (as announced by Apple at the latest earnings call), possibility to purchase movie tickets in the US with Siri and Fandango, and a feature to download songs from iTunes Match individually using iCloud.

To date, iOS users have uploaded over nine billion photos to Photo Stream, sent over 450 billion iMessages and received over four trillion notifications.

In the same press release, Apple has updated the statistics on the number of available App Store apps:

The revolutionary App Store offers more than 800,000 apps to iPhone, iPad and iPod touch users, with more than 300,000 native iPad apps. App Store customers have downloaded over 40 billion apps, and Apple has paid over seven billion dollars to its incredible developer community. Customers can choose from apps in 23 categories, including newspapers and magazines offered in Newsstand, games, business, news, sports, health & fitness and travel.

We will update this article with direct links to iOS 6.1 as soon as they’re available. Apple also released an update for the Apple TV, adding Bluetooth keyboard support, Up Next, and improvements to iTunes in the Cloud.