With a press release published today, Apple announced the App Store has reached 40 billion unique App Store downloads (excluding re-downloads and updates), with almost 20 billion of them happened in 2012. Apple says the App Store has now 500 million accounts, with 2 billion downloads happened during December 2012. The App Store has also reached the number of 775,000 apps available for iPhone, iPad, and iPod touch, with seven billion dollars paid to developers so far.

It has been an incredible year for the iOS developer community,” said Eddy Cue, Apple’s senior vice president of Internet Software and Services. “Developers have made over seven billion dollars on the App Store, and we continue to invest in providing them with the best ecosystem so they can create the most innovative apps in the world.

The press release includes additional facts, numbers, and quotes from third-party iOS developers who were successful in 2012. For instance, Temple Run, a game developed by “husband and wife team” at Imangi Studios, saw over 75 million downloads; development studios Backflip and Supercell “brought in over $100 million combined” for freemium games DragonVale and Cash of Clans; and Autodesk is now offering 20 apps to iOS users, with over 50 million downloads thanks to the App Store. You can read all the third-party experiences and numbers in Apple’s press release here.

The revolutionary App Store offers more than 775,000 apps to iPhone, iPad and iPod touch users in 155 countries around the world, with more than 300,000 native iPad apps available. App Store customers can choose from an incredible range of apps in 23 categories, including newspapers and magazines offered in Newsstand, games, business, news, sports, health & fitness and travel.

In the press release, Apple also stressed the importance of the tools they make available to developers to release and promote their apps on the App Store. Apple specifically mentioned “great ways to monetize apps” including in-app purchase, subscriptions, and advertising.

To give a graphical visualization of the App Store’s growth, here’s a chart by Horace Dediu showing iTunes total downloads by medium (Horace also notes average revenue per app download is 25c). 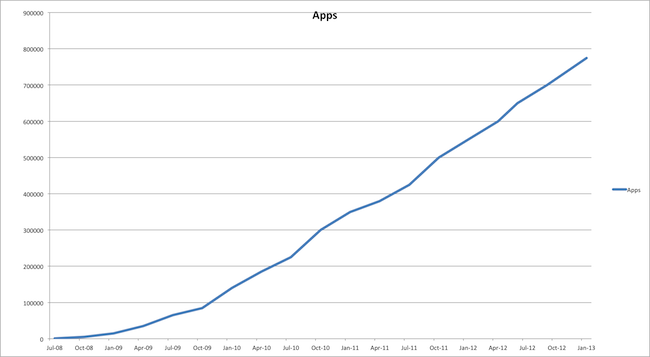 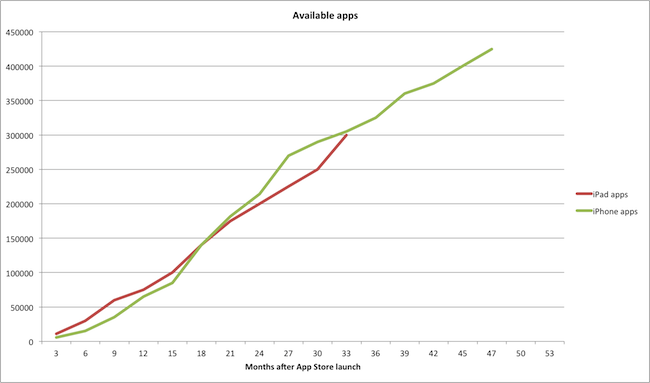 And above, our charts showing the growth of the total number of apps, and the apps availability per platform (iPhone, iPad) months after the App Store’s launch, based on Apple’s official data (click images for full size).