Apple has published their Q2 2015 financial results for the quarter that ended in March 2015. The company posted revenue of $58 billion. The company sold 12.6 million iPads, 61.2 million iPhones, and 4.6 million Macs, earning a quarterly net profit of $13.6 billion.

“We are thrilled by the continued strength of iPhone, Mac and the App Store, which drove our best March quarter results ever,” said Tim Cook, Apple’s CEO. “We’re seeing a higher rate of people switching to iPhone than we’ve experienced in previous cycles, and we’re off to an exciting start to the June quarter with the launch of Apple Watch.”

Fortune, polling a number analysts, predicted Apple would sell 58 million iPhones, 13.9 million iPads, and 4.7 million Macs on average. Analysts predicted earnings of $2.21 per share and $56.9 billion in revenue (year-over-year growth of 33% for earnings and 24% for revenue).

Below, we’ve compiled a graphical visualization of Apple’s Q2 2015. 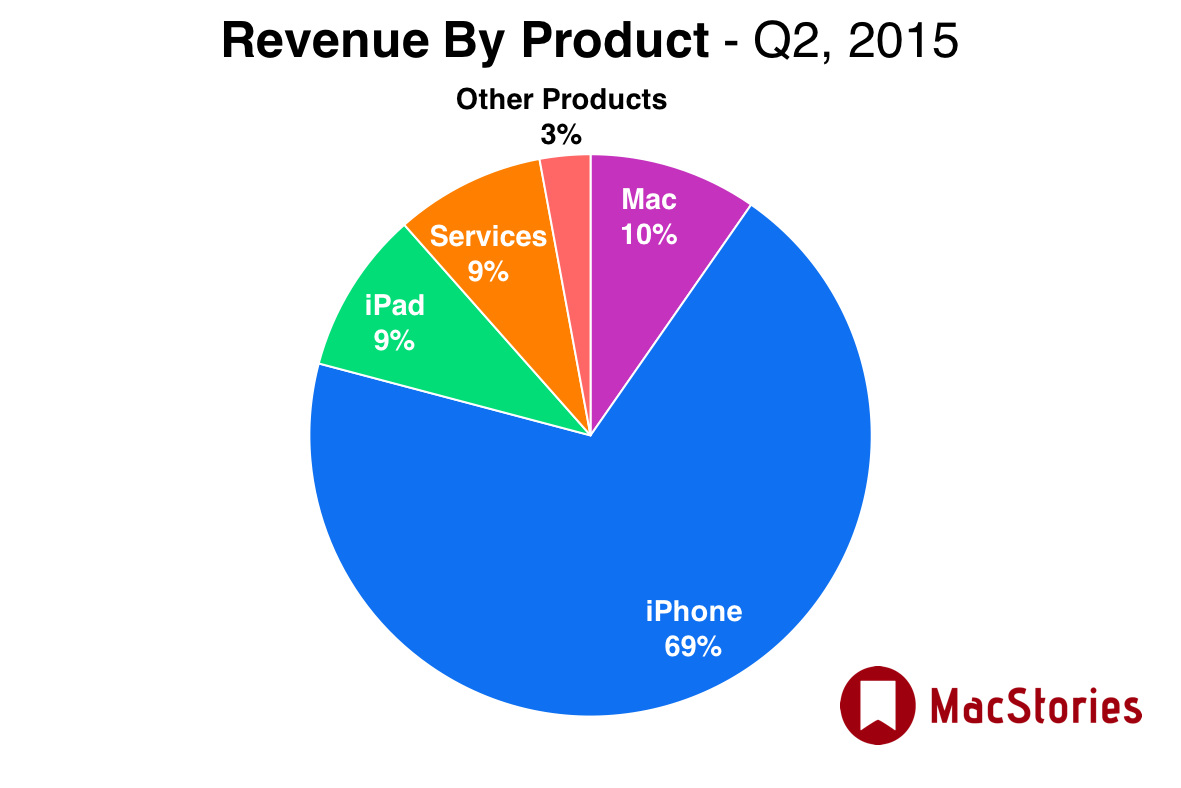 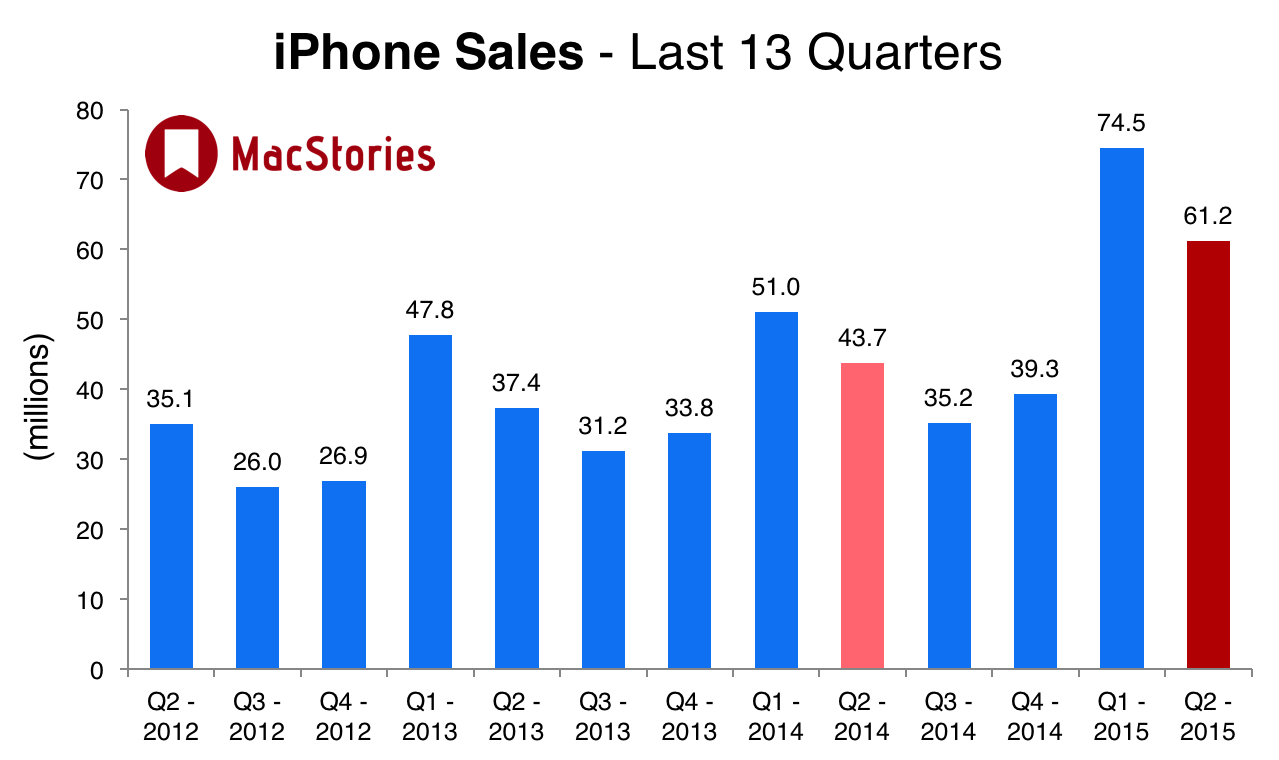 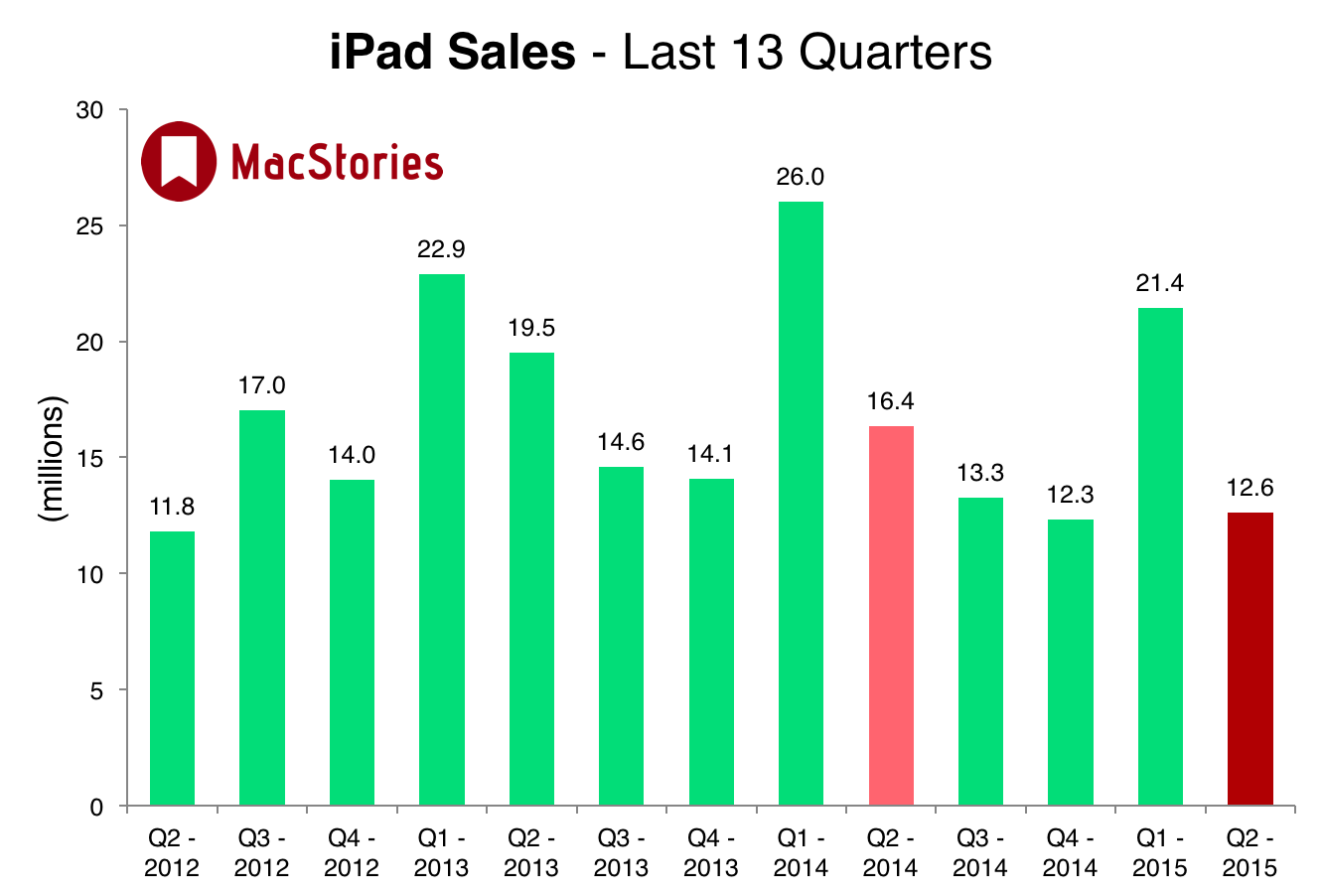 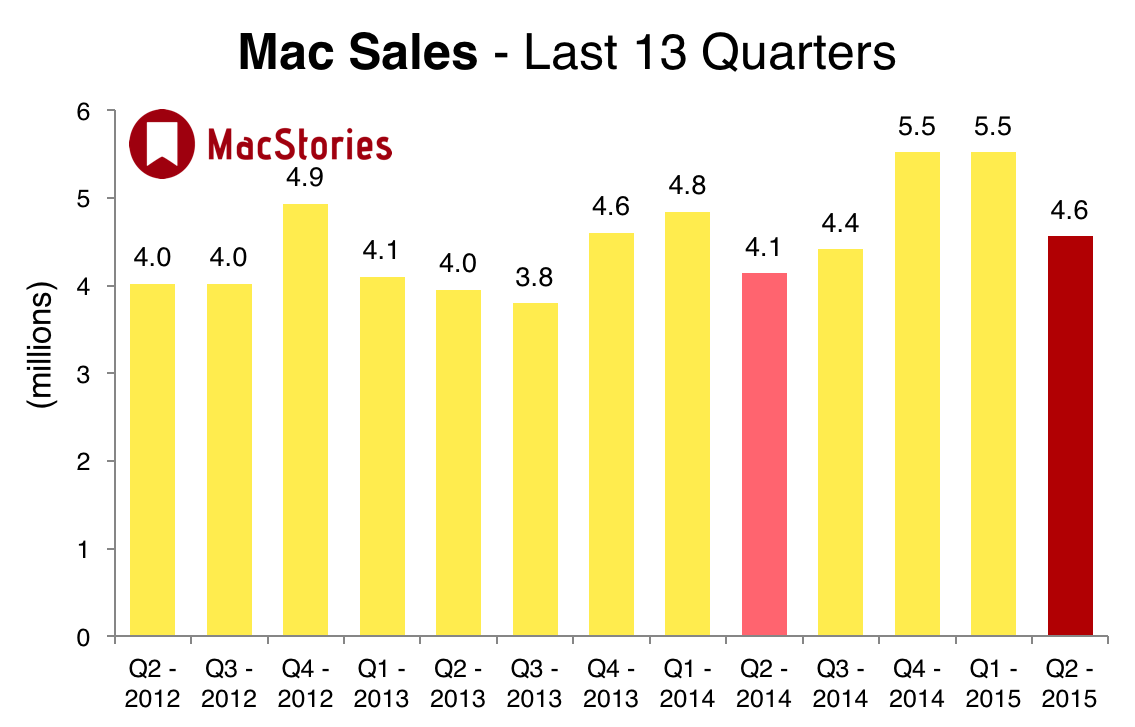 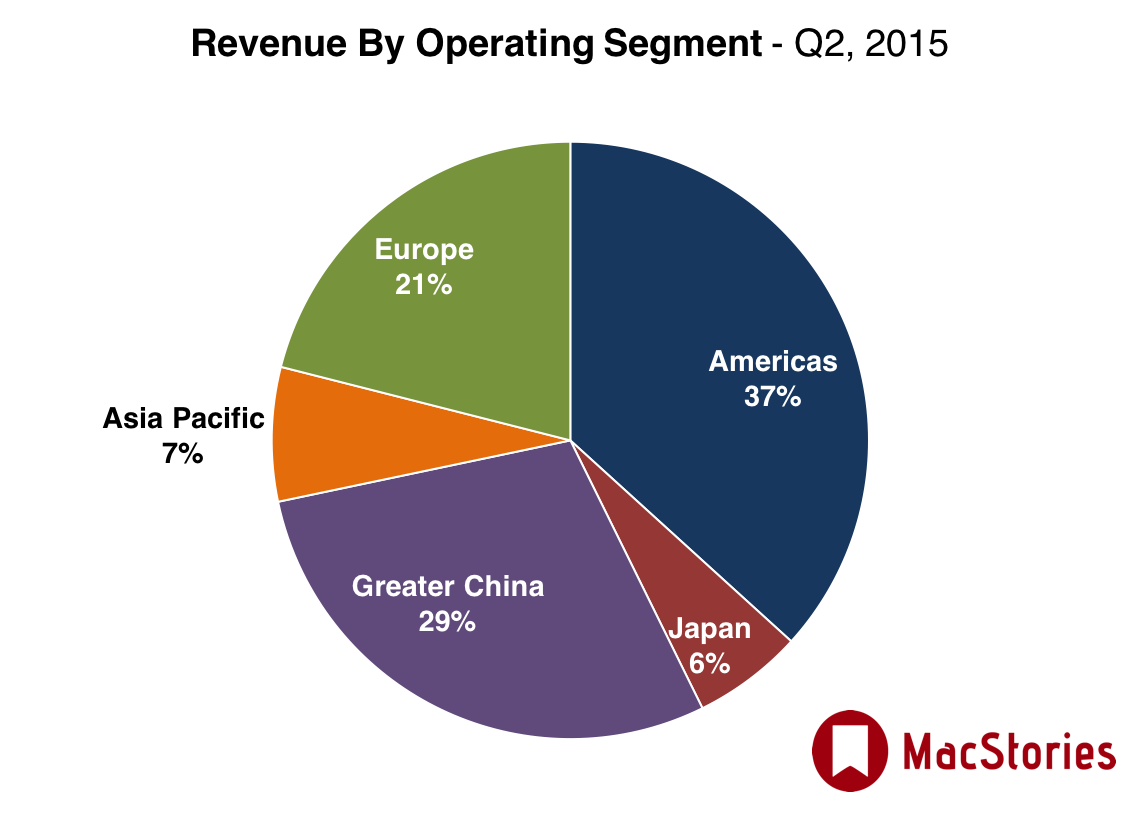 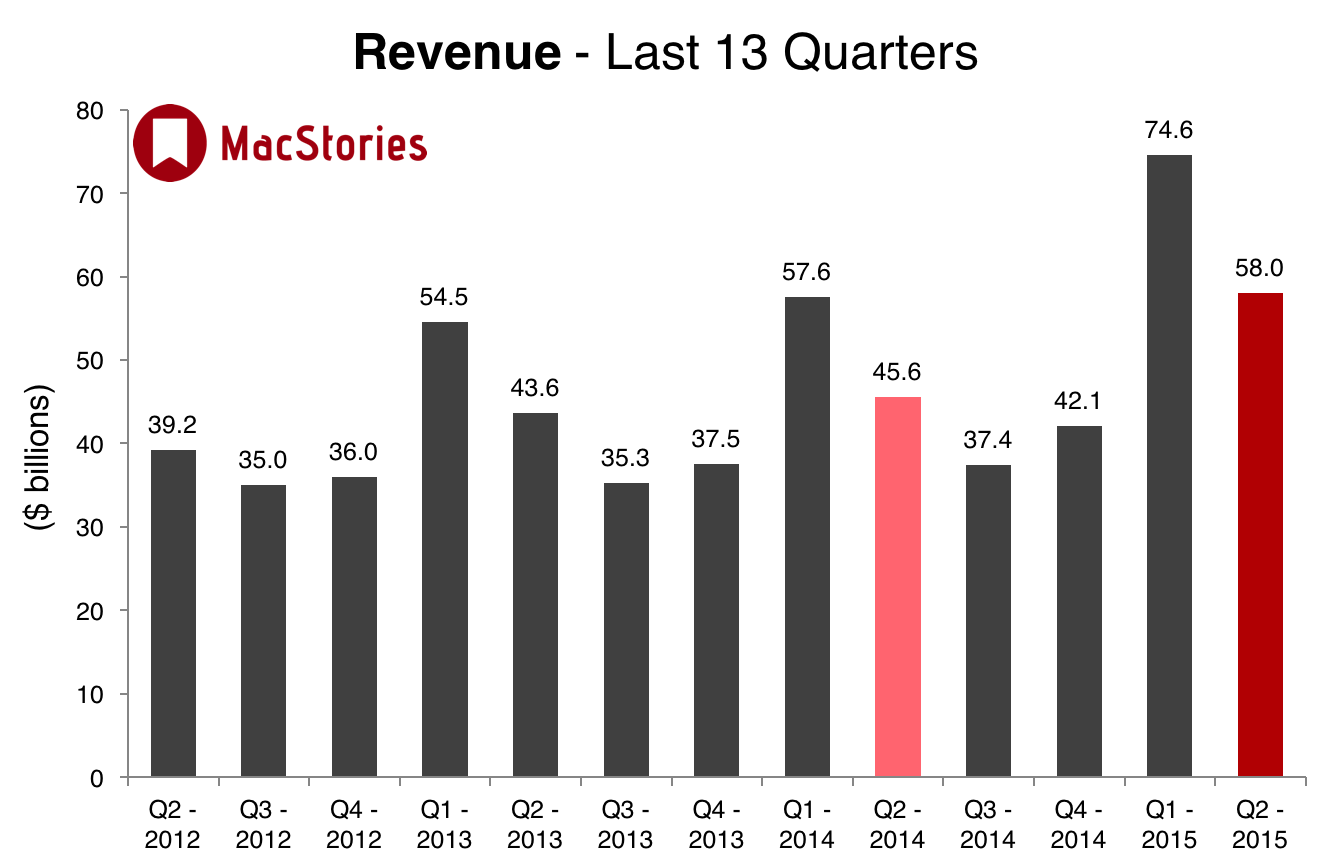 “The App Store had its best quarter ever” – Tim Cook

Apple has acquired 26 companies in the past 4 quarters.

Best Buy is going to offer Apple Pay support in all of their stores later this year.

Over 1000 apps have been released with HealthKit integration.

“The response to Apple Watch has been overwhelming” – Tim Cook

More than 3500 apps are already available for Apple Watch.

iPhone sales more than doubled in Korea, Singapore, and Vietnam.

Apple set a new quarter record for iPad sales in Japan, and an all-time record in China.

The App Store generated 70% more revenue than Google’s Play Store in the March quarter according to App Annie.

There will be 40 retail stores in China by middle of next year.

Revenue from emerging markets was up 58% in the quarter, driven primarily by iPhone.

Initial Apple Watch margins will be lower than the company average.

The Mac also had an “unbelievable quarter in China”, according to Tim Cook.

Developers from China are coming into the Apple ecosystem in significant numbers.

Apple has paid out $5 billion to app developers in Greater China, half of which in the last 12 months.

Apple is seeing iPad cannibalization from both the iPhone and the Mac, and they’re okay with it. “It will stabilize at some point”.

Apple bought back $7B of shares this past quarter. Pace has slowed a bit.

Apple had a better March quarter this year than it had a holiday quarter in 2013. March is the new Christmas.

iPhone unit shipments up 80% in Canada. That’s a little interesting.

iPhone channel inventory up about 1M units, Maestri implies they’re at around 5 weeks worth of inventory. Huge sales to balance that.

The iPad, bigger than most other businesses in the world, a disappointment because it can’t compare to the best business in the world.

China is Apple’s new superpower: sales growth of 71% overall, overtaking Europe for the first time, with iPhone units up 72% there. $AAPL