Ahead of the 10th anniversary on April 28th, Apple has today posted a dedicated page on iTunes called “A Decade of iTunes”. Available here, the page consists of an interactive timeline with 10 tabs for 10 years, and two charts on the right side with top-selling songs and albums “based on worldwide data”.

Celebrate 10 years of iTunes – a decade marked by stunning musical and technological evolution. From historic iPod release to the debut of groundbreaking artists, our timeline captures key moments in our history. Plus, take a look back at the defining albums and songs that hit the top of the charts each year.

Key events are indeed listed in Apple’s timeline. From the introduction of the first iPod and the billionth song sold on February 23, 2006, to the iPad announcement in January 2010 and Justin Timberlake’s recent new worldwide record for album sales with The 20/20 Experience, it’s fun to click through the years and remember important events and releases of the iTunes Store’s first ten years.

The timeline can also be viewed from iOS devices (it’s currently featured on the iTunes Store’s front page), with a nice custom layout on the iPhone. 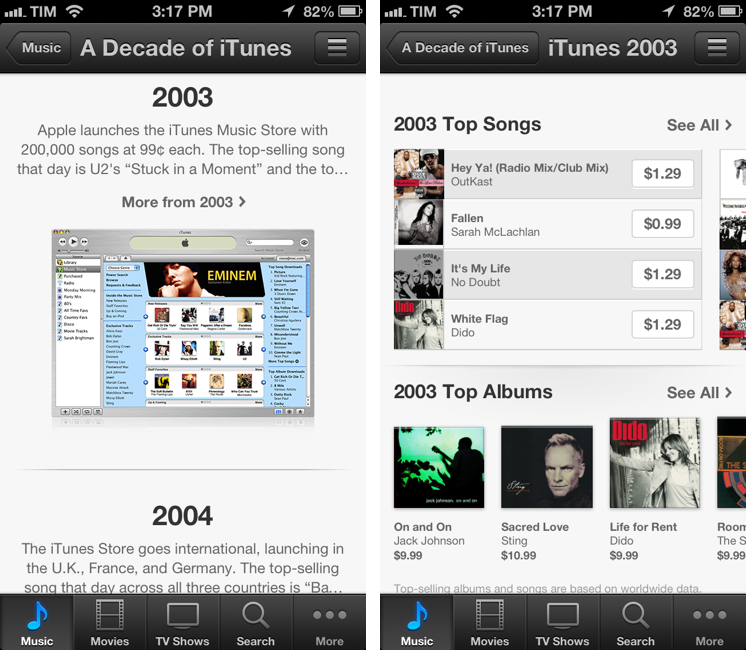 At its Q2 2013 earnings call yesterday, Apple said that iTunes’ solid media ecosystem helped them achieve more than $4 billion in revenue for iTunes, software, and services in the quarter.