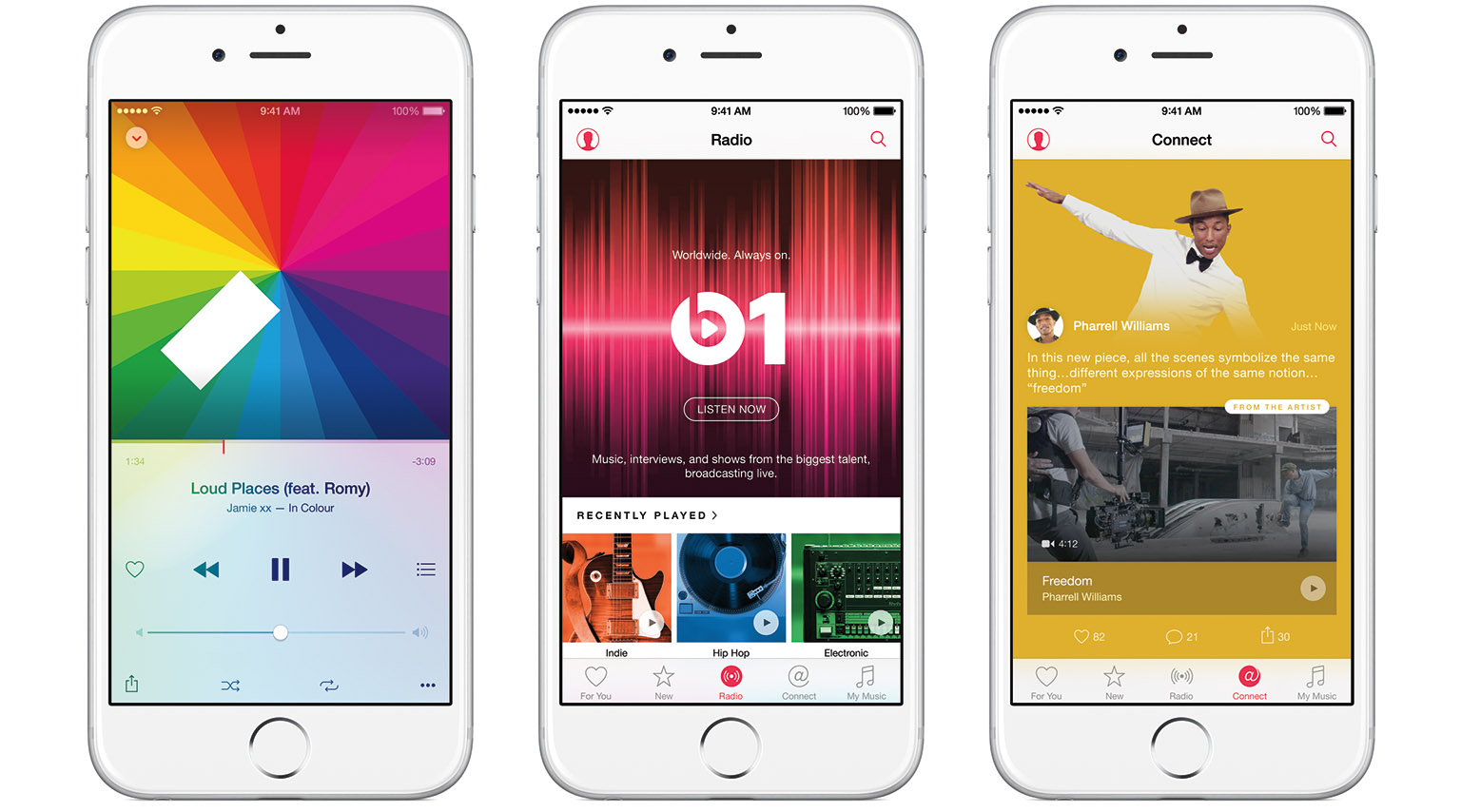 At today’s WWDC 2015 Keynote Address, Apple announced its new Apple Music service which will launch later this month on June 30. Apple Music was introduced in a similar way to the iPhone and Apple Watch, with Jimmy Iovine and Eddy Cue talking on stage about how Apple Music is really three core products:

Apple Music was first introduced on stage by Jimmy Iovine who described the product as “one complete thought about music” and talking about how Apple Music is “All the ways you love music. All in one place”.

“We love music, and the new Apple Music service puts an incredible experience at every fan’s fingertips,” said Eddy Cue, Apple’s senior vice president of Internet Software and Services. “All the ways people love enjoying music come together in one app — a revolutionary streaming service, live worldwide radio and an exciting way for fans to connect with artists.”

Apple Music will launch later this month on June 30 and it will be available in over 100 countries.

Users will be able to access Apple Music from a new Music app coming to the iPhone, iPad and iPod touch with iOS 8.4 on June 30. It will also be available for the Apple Watch, and iTunes on the Mac and Windows which will also receive updates on June 30.

Apple Music will cost US$9.99 per month for a single membership that unlocks all Apple Music features. A family membership, which will be facilitated through the existing iCloud Family Sharing system, will also be available for $14.99 per month and this will allow up to six people to get individual access to Apple Music.

Apple will also be offering a 3-month free membership to Apple Music, starting from June 30.

Features free for anyone

First and foremost, Apple Music is a streaming music service that “puts the entire Apple Music catalog at your fingertips”. Apple touts tens of millions of tracks in the Apple Music library, but you’ll naturally also be able to stream the music you’ve purchased from the iTunes Store and any music you’ve ripped from CDs. Music from all three of these sources will seamlessly live alongside each other in the My Music tab in the new Apple Music app.

One thing that is not yet absolutely clear is how the Apple Music catalog compares with the iTunes Music Store catalog. At last count in early 2013, the iTunes Music store had over 26 million songs, whereas the most specific Apple is being with Apple Music’s catalog is “tens of millions”. The other important detail that has not officially been detailed is the quality of Apple Music when streaming, but it seems reasonable to assume it will be 256kbps (in line with iTunes Match), which is also what TechCrunch is reporting.

Apple Music’s search functionality will be able to search based on your local library or the Apple Music library. As well as being able to display searches that are trending and show what you’ve looked for previously.

Siri is also dedicated to helping you enjoy great music and have fun with Apple Music. Ask Siri to, “Play me the best songs from 1994,” “Play the best FKA twigs song,” or “What was the number one song in February 2011?”

At the heart of Apple Music is curation. From the very moment you start to use Apple Music, you’ll be asked to select some favorite genres and artists, Apple will use this, combined with your iTunes Store purchase history, to create recommendations in the ‘For You’ tab. But it goes beyond just using algorithms to create recommendations. Apple has hired “talented music experts from around the world” to assist in the creation and curation of playlists that sound great from one song to the next.

When we make recommendations, we consider what you tell us you like. Whether you love a song or not, your feedback helps our suggestions get better and better. But we also pay attention to what you actually play. So if you’re an EDM fan with a secret affinity for big band music, we’ll find you more stuff that swings. And drops the beat.

Some of the playlists that will be recommended to you will be created by other respected and knowledgeable sources in the music industry. That includes Rolling Stone, Q Magazine, Pitchfork, DJ Mag, Shazam and MOJO.

The music experts working on curating playlists are also on the lookout for new music which will be featured in the New tab. But it’s not just new music, or the top charts, it’ll feature up and coming artists and music videos.

Not all music is created equal. Apple Music experts are out scouring every corner of the music world to bring our members the stuff worth listening to. It’s not just any up‑and‑coming band. It’s the one that’s about to go big. It’s not just the latest video to drop. It’s an alternate cut that you simply have to watch. And it’s more than just top charts. It’s popular music and videos from genres you care about. This is the music that matters. 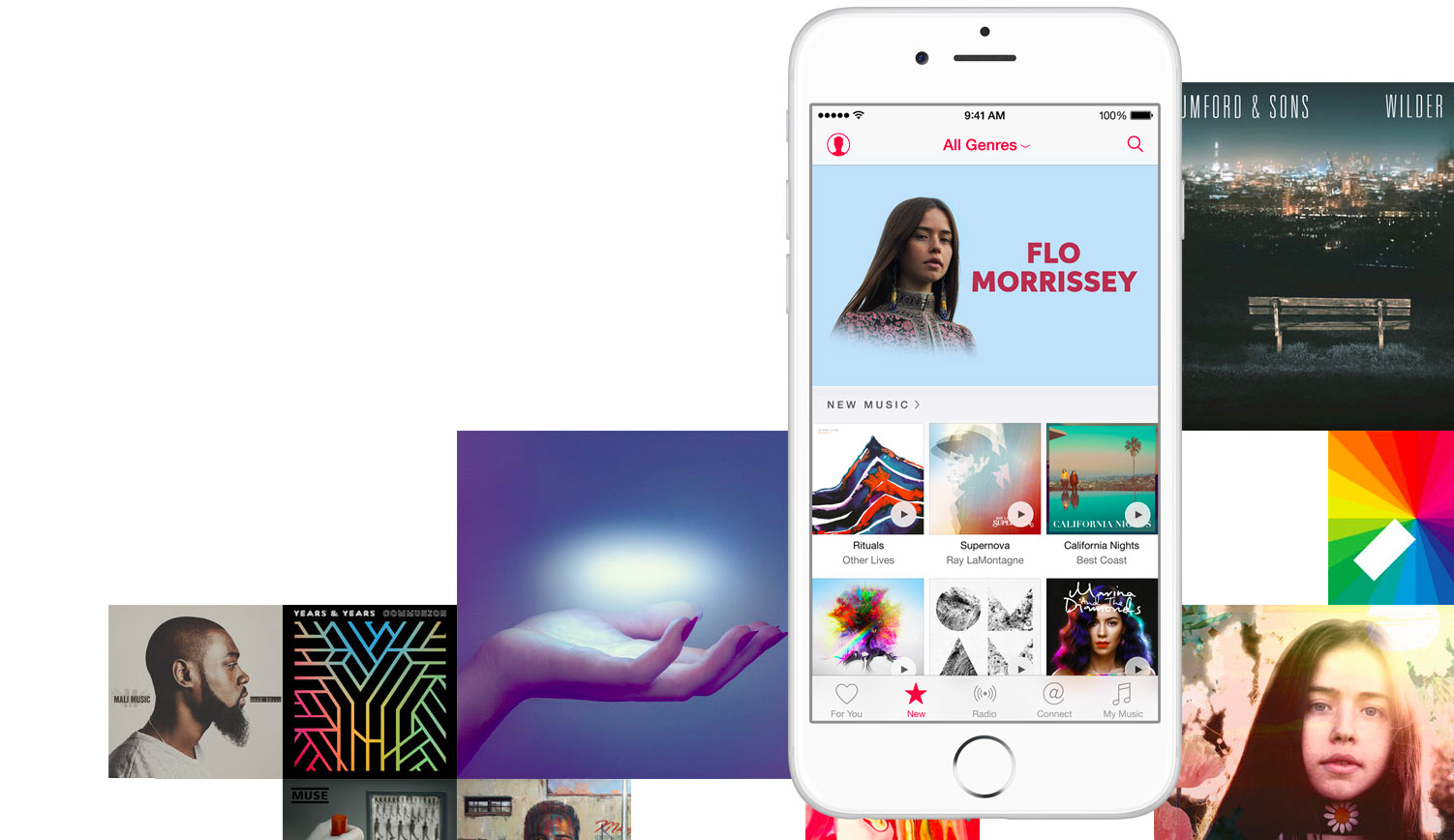 A tentpole feature of Apple Music is the new 24/7 global radio station, Beats 1. Broadcast live and free to every country with Apple Music, Beats 1 is a radio station “dedicated entirely to music and music culture”. Beats 1 will be led by “influential DJs Zane Lowe in Los Angeles, Ebro Darden in New York and Julie Adenuga in London”.

Tune in to Beats 1, broadcast live from cities around the globe. Zane Lowe and his handpicked team of renowned DJs create an eclectic mix of the latest and best in music. Or dial in to curated stations that have been totally revamped.

It makes sense: In the 12 years Lowe spent at Radio 1, he gained exclusive interviews with Jay-Z, Kanye West, Eminem and music producer Rick Rubin. He’s also credited with helping to bring acts like the Arctic Monkeys, Adele and Ed Sheeran into the public eye. Apple will hope he can do the same while heading up Beats 1, but influence many more listeners in the process.

Beats 1 is ad-free, although The Verge asked Apple if that would ever change and “didn’t get a very clear answer”.

Apple Music also includes a feature that will be familiar to any iTunes Radio user; Stations, which Apple says has been “totally overhauled”. The new Stations cover a range of genres and have been “expertly refined by [Apple’s] music pros”. Some of the stations include Pop Hits, Americana, On The Floor, Soundsystem and The Mixtape. Stations are free for anyone with limited skips per hour (like iTunes Radio) and Apple Music members can skip as many tracks as they like.

You can also build your station by selecting any song, album or artist and a station will be created based on your selection. But by making adjustments to the station, Apple Music will better understand your tastes and make the station more personalized.

The third and final core element of Apple Music is Connect. Essentially it’s a highly specialised social network that aims to connect musicians with their fans. Any artist on Apple Music, whether they’re Pharrell Williams or an unknown musician just getting started. Artists can post messages, share their favorite music that’s on the Apple Music catalog or upload audio, video and photos.

Fans can then comment and like anything an artist shares on their Connect page, as well as share it via an iOS Share Sheet. Naturally, artists can also reply to any comments, and Apple thinks this “takes the connection you have with music to a whole new level”.

Artists and fans now have an incredible way to connect with one another directly in Apple Music with Connect. Through Connect, artists can share lyrics, backstage photos, videos or even release their latest song directly to fans directly from their iPhone. Fans can comment on or like anything an artist has posted, and share it via Messages, Facebook, Twitter and email. And when you comment, the artist can respond directly to you.

For artists interested in claiming their profile on Apple Music Connect, they can learn more here.