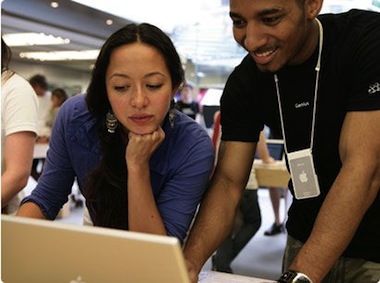 As noted by 9to5mac, a new service has been recently introduced in a number of Apple Stores: “personal setup” for Mac computers. The personal setup service for iOS devices has been around for a quite a while now; to better introduce customers to the OS X ecosystem, Apple is now rolling out this new service to help new users get around the basics of a Mac, the Mac App Store, iTunes and email accounts.

This is minor news for Mac aficionados but will be very helpful for people new to the Mac and for the wider range of consumers. The service will go live in some stores as soon as Tuesday but we’ve heard that other stores will be launching the service in the next few weeks. The new service is very similar to the “setup room” that is currently featured at Apple’s Covent Garden store in London.

The service was actually launched a few days after Christmas in some Apple Stores, we’ve been told from a separate source. The internal name for the service is “Custom Configure” – “personal setups” are actually One to One data transfers. It is unclear whether or not the service will be branded “Personal Setup” in the future. As part of the equation, Apple is also going to feature dedicated “Mac stations” to better help customers through this Mac setup process and Stores will soon replace some iPod and iPod touch tables for “personal setup tables”, we’re told.

This new personal setup service for Macs is going to be a big part of the experience at Apple Stores. Just like the Genius Bar for customer support, Apple wants to offer easy and immediate help to people who just bought a new Mac. We think it’s a great idea.