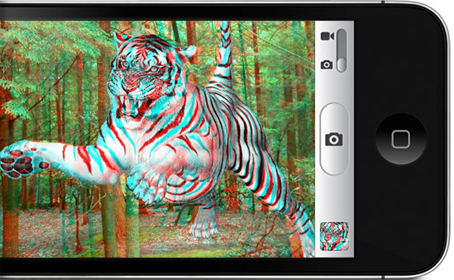 Patent applications from Apple made public this week show that they have considered adding an additional camera to a device such as the iPhone to enable users to shoot 3D photographs. AppleInsider discovered the patent, called “Systems and Methods for an Imaging System Using Multiple Image Sensors” which details how they would implement the dual-camera system for the capture of 3D images.

In particular it differentiates itself from current offerings, claiming that it is a “paradigm shift from the known software-based approaches” that “guess” at how to combine the two images into a single 3D photograph. Apple says that their approach would avoid creating images with artefacts by implementing a hardware-based approach for more accurate processing. Such a system would involve multiple sensors that determine the luma, chroma and depth of the two images to unify them into one.

Furthermore the patent describes how the system could also record video in 3D and only require a simple, one-time, calibration by the user. The Nintendo 3DS which has just recently been released resembles the aims of this patent with its feature of dual rear cameras to let users to take 3D photographs and play augmented reality games that render in 3D on the fly.