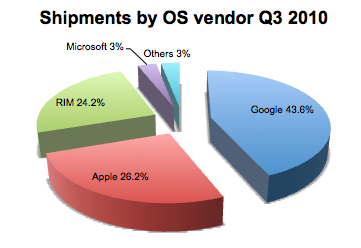 According to Canalys’ latest report, Apple grabbed 26% of the U.S. smartphone market (still considered the biggest and most relevant in the world) but Google, thanks to its multitude of devices running Android, is still leading with nearly 44%.

The numbers, which refer to Q3 2010, also show that Apple really took the lead from RIM, stuck at 24%. Nokia is still leading the worldwide share with a resonant 33%, and Google’s share is expected to increase as more devices running Froyo and the future Android Gingerbread ship.

In the meantime, Apple somehow managed to obtain a 50% worldwide profit share with the iPhone. Not bad.