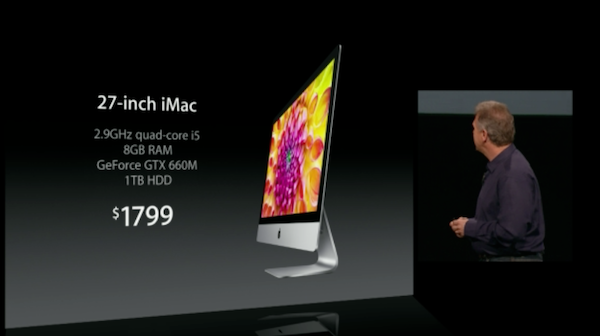 During this afternoon’s Apple Special Event at the California Theater in San Jose, California, Phil Schiller announced the availability of all new, incredibly thin iMacs, starting at $1299 for the 21.5-inch base model, and $1799 for the 27-inch base model.

The new iMacs have been completely rebuilt from the ground up. The new iMacs have an edge that’s astoundingly only 5 mm thin, is 40% less in volume, and weighs 80% less than the previous generation models. In engineering the new iMac, Apple uses a proces called friction-stir welding (the same process used to manufacture aircraft wings) to join two pieces of aluminum together to create such a thin enclosure. Apple removed the 2mm air gap between LCD panel and the glass in process called full lamination, making the display 45% thinner. The new display is manufactured with a new technology called the “plasma deposition process,” resulting in 75% less reflection and more accurate colors. On the manufacturing line, each iMac display is calibrated with a spectroradiometer to meet color standards. As done with the MacBook Pros with Retina display, Apple has removed the optical bay from the iMac. Thanks to Apple’s new manufacturing processes, the new iMac’s display uses 50% less power, and the iMac itself meets lower power requirements set by the EPA. 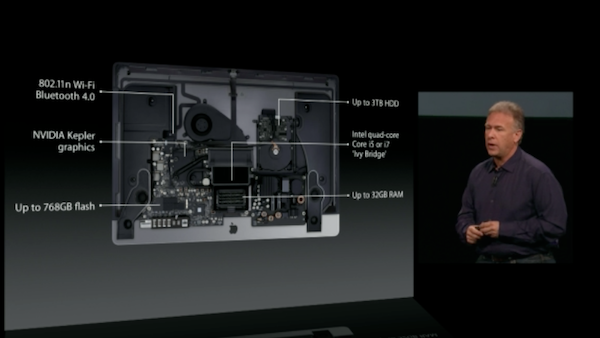 A new option for the 27-inch iMac is Apple’s new Fusion Drive, which combines a 128 GB flash drive with a 1 TB or greater hard drive, creating a fused single volume that Mountain Lion automatically manages for you. OS X is able to figure out which applications and documents you use the most, and automatically move them to flash storage for faster access. Boot time is faster, and for applications like Aperture, Apple’s Fusion Drive is almost as fast as flash storage.

The 27-inch iMac will be available in December starting at $1799 with a 2.9 GHz Intel Core i5 quad-core processor, 8 GB of memory, GeForce GTX 660M for graphics and video, and a 1 TB hard drive for storage. A final configuration at $1999 updates the specs to a 3.2 GHz Intel Core-i5 quad-core processor and swaps in a NVIDIA GeForce GTX 675MX with 1 GB of GDDR5 memory.

As a purchasing note, the 21.5-inch model iMac does not have upgradable memory — the amount of memory chosen at purchase is set. The 27-inch model can be upgraded later with up to 32 GB of memory. (Hat tip MacRumors.)

Updated at 3:18pm with more information on engineering, model options and pricing.