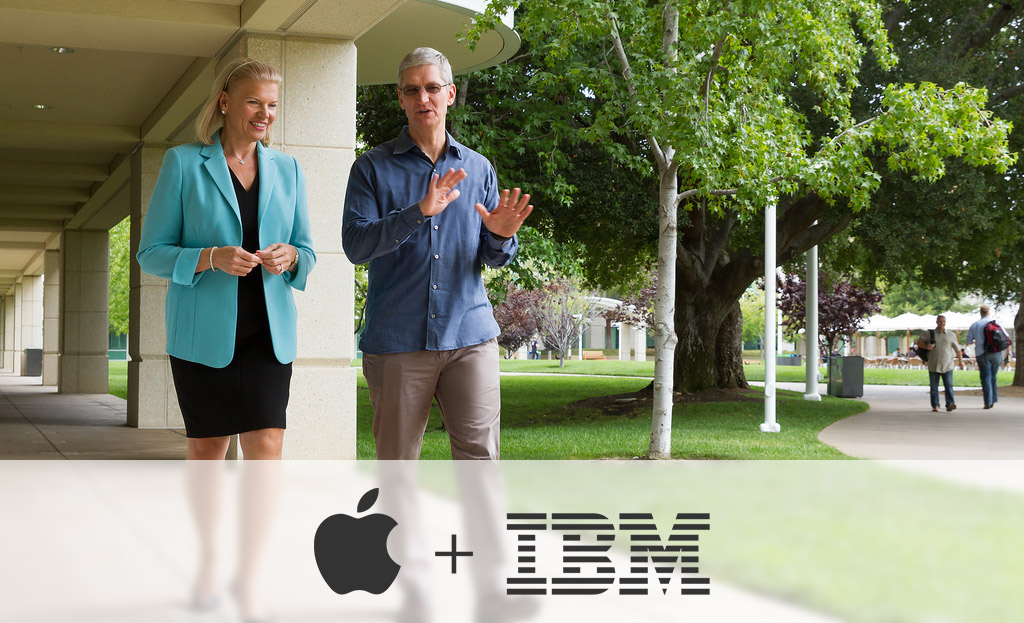 A few hours ago, Apple and IBM announced that they were partnering up with each other to “transform enterprise mobility”. The partnership will bring new enterprise solutions to iOS including native apps developed by IBM, unique IBM cloud services for iOS, a new AppleCare for enterprise, and will allow IBM to sell iPhones and iPads packaged with “industry-specific solutions”.

The new IBM MobileFirst for iOS solutions will be built in an exclusive collaboration that draws on the distinct strengths of each company: IBM’s big data and analytics capabilities, with the power of more than 100,000 IBM industry and domain consultants and software developers behind it, fused with Apple’s legendary consumer experience, hardware and software integration and developer platform. The combination will create apps that can transform specific aspects of how businesses and employees work using iPhone and iPad, allowing companies to achieve new levels of efficiency, effectiveness and customer satisfaction—faster and easier than ever before.

The two companies are working together to bring more than 100 mobile solutions, including a number of apps that are designed and developed for the enterprise. These so-called mobile solutions will address specific industry needs including, but not limited to, those in retail, healthcare, banking, travel and transportation, telecommunications and insurance. They will be built from scratch with IBM’s cloud software services for analytics, data security and data management native to iOS. The hope for both companies is that the partnership will “deliver a new level of value for businesses”. These mobile solutions will start arriving later this year and into 2015.

“iPhone and iPad are the best mobile devices in the world and have transformed the way people work with over 98 percent of the Fortune 500 and over 92 percent of the Global 500 using iOS devices in their business today,” said Tim Cook, Apple’s CEO. “For the first time ever we’re putting IBM’s renowned big data analytics at iOS users’ fingertips, which opens up a large market opportunity for Apple. This is a radical step for enterprise and something that only Apple and IBM can deliver.”

If you’re interested in reading more about the Apple and IBM partnership, you can read the joint press release and view IBM’s Mobile First webpage. If that’s not enough the CEOs of IBM and Apple, Ginni Rometty and Tim Cook, sat down with various reporters for brief interviews which I’ve linked to below.

In an interview with Re/code, the two CEOs talked about how the partnership is a combination of two market leaders. Rometty talked of how IBM is the gold standard of big data, analytics, integration and the private cloud and how Apple is the gold standard for devices, development environment and usability. Tim Cook discussed the same notion by using an analogy of puzzle pieces fitting together nicely with no overlap.

The deal is the result of several conversations between Cook and Rometty over the last few months. “If you were building a puzzle, they would fit nicely together as puzzle pieces with no overlap,” Cook said of the two companies. “When you put our teams in the room together, we both have engineering cultures, so they feed off of one another. And when you do that you end up with something better than either of you could produce yourself.”

“We’re good at building a simple experience and in building devices,” Cook said. “The kind of deep industry expertise you would need to really transform the enterprise isn’t in our DNA. But it is in IBM’s.”

In their interview with The New York Times, Tim Cook pointed out that IBM has the capability of bringing “big data analytics down to the fingertips” of iPhone and iPad users in a way that Apple couldn’t. Also highlighted was the fact that there is a huge enterprise opportunity for iOS devices, even despite early success in pushing iOS devices into over 92 percent of Fortune 500 companies.

“The penetration is low, and the ceiling is so far above us it’s unbelievable,” Mr. Cook said.

If you’d prefer to watch a video interview, CNBC’s Josh Liptin also interviewed the pair of CEOs and we have embedded it below.

Meanwhile, over at Techpinions, Tim Bajarin has a brief first-look analysis at what the partnership will mean for Apple and the enterprise industry more broadly. He notes that it will be a big deal for Apple, ensuring that iOS devices will gain more traction in the enterprise, whilst noting the great irony in the partnership.

This is a big deal. I have worked on IT projects that included IBM sales and services over the years and they have a world class organization that garners great respect within the enterprise. In fact, they invoke a level of trust in IT that is tough to beat. IBM’s endorsement of iOS and the devices that use it speaks a lot to how much they respect Apple’s technology and are willing to stand behind these products as part of their major IT solutions programs. Given the power and clout of both companies, I suspect this will become one of the most important and powerful tech partnerships we have ever seen.

Finally, as picked up by 9to5 Mac, Tim Cook has sent an email to Apple employees where he talks about the partnership and how he is “excited to see it take off”.

IBM is known for helping customers leverage big data and analytics to make their businesses run better. With over 100,000 consultants and sales professionals, they also have massive scale and global reach. IBM‘s sales and consulting teams will also be selling iPad, iPhone and AppleCare for Enterprise as part of the partnership.