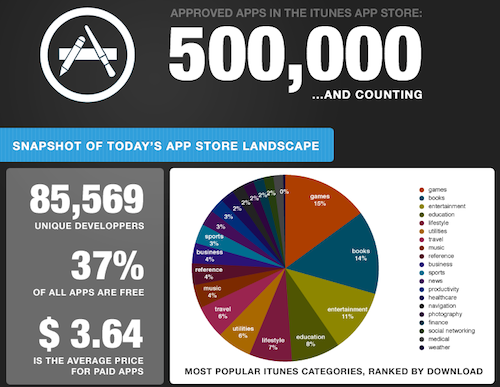 Just after midnight this morning, the iTunes App Store approval team pushed through a batch of app submissions, making the total number of submissions exceed 500,000 apps. It means that in the 34 months since the App Store opened in July 2008, there have been just over half a million apps published to the App Store.

To celebrate the event, Chillingo (developer), 148apps (mobile app blog) and Chomp (search company) created an epic infographic. It’s full of a tonne of interesting factoids such as: Angry Birds stayed at number 1 on the paid apps list for 275 days, the App Store launched with 500 apps, each developer submits an average of 4.6 apps and so on.

The actual number of apps available for download is currently closer to the 400,000 mark because of various replacement and withdrawals of the past 34 months. We also know that at least 75,000 of the apps are for the iPad – a figure revealed in late March. To see the full infographic jump over to the 500K Facebook page put together by Chillingo, Chomp and 148apps.